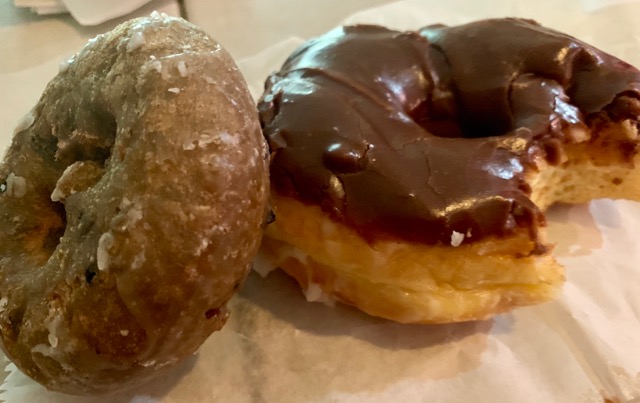 He Said: Before my troublesome pancreas moved me into a new food reality, I used to stop by Ed’s regularly to get a couple of doughnuts for me and for She Said. In the six years since I was put on a permanent low-fat diet, I’ve largely avoided doughnuts as just too dangerously fatty. But She Said told me we were due for a doughnut visit, and Ed’s popped up on the radar. So I was sent to hunt and gather.

She Said: Yes, Ed’s was part of our Saturday-morning ritual for a long time, when He Said would buy doughnuts and stop for a soy latte for me at Starbucks. But then we switched to Gwyneth Paltrow’s recipe for homemade banana buckwheat pancakes, and we’ve never looked back. But when Ed’s came up next on the magical list, I was pretty happy, buckwheat pancakes or not.

He Said: You cango through a drive-through here, and if you know exactly what you want that’s a convenient way to go. You can also eat here at one of the three or four tables they have in the small area, and the place is pleasant enough inside. I decided to go in and order at the counter, since I didn’t know if the two dollars I had in my wallet was going to be enough or if I’d have to use my credit card—and there is an extra charge here if you use your credit card for orders under $5, so I figured if I was going to get charged extra, I’d just add on to my order until it was more than $5 worth—surely I could find a goodly number of sweet treats to eat later if I needed to. Turns out two doughnuts was less than $2, so it was fine. So was the ambience.

She Said: It’s always fun to go to the counter of goodies and make your selection, but I let He Said take care of that this time. I didn’t even have to tell him what I wanted. He remember from all those Saturdays of yesteryear.

He Said: They do have coffee here, if you want to sit down and have a cup with your doughnut. But I was getting it to go, so I didn’t get anything to drink.

He Said: It’s a bakery, so of course they have a lot of bakery goods on display: cakes, cupcakes, brownies, bars, pecan pie and lots and lots of cookies, in particular the frosted smiley-face cookies that are something of a trademark for Ed’s. But my mission here was doughnuts, and that’s what I was going to get.

In the halcyon days before my low-fat diet, I would always get the chocolate glazed as the most decadent and delicious of all the doughnut tribe. There were occasional Saturdays when I arrived later than usual, and sometimes when that happened, tragically, the chocolate glazed doughnuts were no more. I knew that getting here around lunchtime was risky, and as I looked in the display case I froze for an instant—I didn’t see any chocolate glazed at first. Then, with a sigh of relief, I spotted just two left, almost hidden since they were well toward the back of the shelf.

Just so we’re clear, I’m talking about what is essentially a classic yeast (a.k.a. raised, as opposed to cake) glazed doughnut with the extra added deliciousness of a thick chocolate frosting. It doesn’t get any better than this in the doughnut world, and I savored the variety of sweetnesses. A quick nutritional check suggests that these doughnuts at Ed’s are likely between 240-250 calories apiece, and contain 11-12 grams of fat. This is not as unhealthy as I had been telling myself, in fact, and perhaps I could have one of these babies occasionally again, if I don’t go crazy the rest of the day.

She Said: He Said brought me my beloved standard order of a blueberry cake doughnut. I absolutely love these little flavor bombs of deliciousness. Lightly glazed, they are still very sweet, but the fruit adds delight to this purple circle of goodness. I know that He Said likes to go on and on about the chocolate glazed, but they do not hit the spot like a perfectly made blueberry doughnut.

He Said: I had a friendly, helpful and professional counter maiden, or whatever one should call them. Things were a little bit busy at the counter, and one of the servers was on the phone taking an order, but things moved quickly, and I got my order in a timely manner.

What We Got and What We Paid: One blueberry cake doughnut, one chocolate glazed doughnut, for the exorbitant cost of $1.64.

Elapsed Time from Our Arrival to Food Arrival: Oh, about a minute. I did have to wait in line for a few minutes before getting waited on, but I’m pretty sure I was in and out in five minutes.

He Said: There are a few other bakeries in town that may have more choices than Ed’s, but nobody has better doughnuts, and if I get a craving, I’m going back here for a chocolate glazed fix.

She Said: Ed’s has been meeting our doughnut needs for 16 years, and we plan on them continuing to do so because their doughnuts hit the spot.

Is Ed’s Good At What It’s Good For? Abso-doughnut-lutely!!