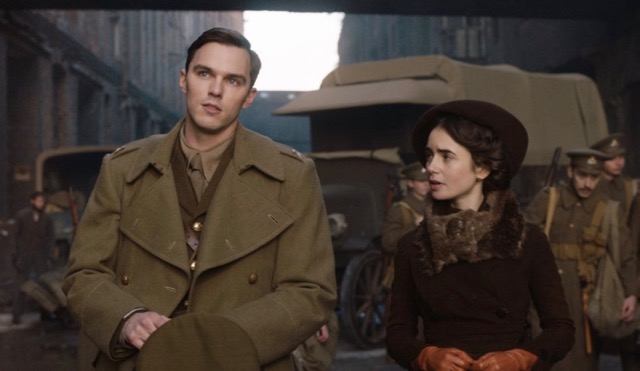 In the interest of full disclosure, I am not am not an average moviegoer who may have decided to come see Finnish director Dome Karukoski’s new biopic Tolkien, about the formative years of the creator of the modern fantasy genre, because of a fondness for J.R.R. Tolkien’s novels TheLord of the Rings and The Hobbit, or of the films that helped re-popularize them for the 21st century. If I were, I might have found this film a cozy and entertaining rendition of the author’s life, as a good percentage of its audience seem to have done: At latest count, the movie has an 86 percent positive rating on RottenTomatoes.com. This, of course, reflects an audience predisposed to like the film, since they already like Tolkien himself. Critics, by the way, have been less kind to the film: Rotten Tomatoes finds only 49 percent of critics giving the movie a favorable rating. This 37 point gap is quite unusual, and I’m not sure I can explain it. Most of the critics dislike the film for rather vague reasons—it’s not imaginative enough, many say, considering the fact that its subject is one of the greatest imaginative minds of the 20th century. It’s fairly generic, they say. It’s slow-moving at times. But these are trifles.

As for me, as I said, I am not the average moviegoer in this case, having published a 700-page Critical Companion to J.R.R. Tolkien back in 2011. Perhaps it put me at a disadvantage to come to the movie with so many preconceptions about the author’s life, since one must, in the case of all biopics, allow for the fact that movies will take some license and will fictionalize part of the story in order to create something more dramatic than the bare facts, and so perhaps arrive at a certain truth about the subject that transcends the facts. I understand this. But allow me to say: That is not the case here. In fact, the most egregious alterations of fact in this film actually made for a less dramatic and interesting story than sticking to the actual facts could have.

The film focuses on the years from 1908 (when Tolkien was 16), which is when the orphaned Tolkien and his brother Hillary moved into a boarding house in Birmingham, run by Mrs. Faulkner, and when Tolkien met and fell in love with 19-year old fellow boarder and orphan Edith Bratt; and December 1916, when the (nearly) 25-year-old Lieutenant Tolkien, suffering from the ravages of trench fever, was invalided home from the battle of the Somme in the First World War to recover his health and, ultimately, to settle down with Edith. Aside from an early montage of life with his dying mother and a final montage of life with Edith and his children years later, the film focuses on his relationship with Edith and with his friendships with three close friends from King Edward’s School in Birmingham, with whom he formed a club called the T.C.B.S. (Tea Club, Barovian Society)—named for Barrows, the tea room in which the group would meet.

All of this makes perfect sense: These years were for Tolkien the most emotionally tumultuous, and the most formative in his life. They are the perfect subject for a movie about him. And Nicholas Hoult (best-known as the Beast from the X-Men movies) and Lily Collins (who was Snow White in Mirror, Mirror) manage to come off as likeable and believable as Tolkien and Edith (Collins bears a striking resemblance to pictures of the young Edith). But screenwriters David Gleeson and Stephen Beresford manage to distort, omit and puzzlingly add so many important details, and for no apparent reason, that the film actually becomes hard to watch. Let me count the ways:

My chief consolation is that if I am scuppered tonight there will still be left a member of the TCBS to voice what I dreamed and what we all agreed upon. … May God bless you my dear John Ronald and may you say things I have tried to say long after I am not there to say them if such be my lot.

So, that means “I’m in love with you”? What the hey? It’s likely this kind of distortion that convinced the Tolkien estate to distance itself from the film, issuing a statement that “they did not approve of, authorize or participate in” the project.

Oh to be sure there are scenes in the film worth watching, most notably a scene between the student Tolkien and Oxford Professor Joseph Wright (a delightful Derek Jacobi), who inspires the young scholar to focus on Philology after he fails to thrive in Classics, but these are few and far between, and they don’t make up for the gaffes. Two Jacqueline Susanns for this one. Apparently there are two other Tolkien biopics in development right now. We can only hope they will be better than this one.