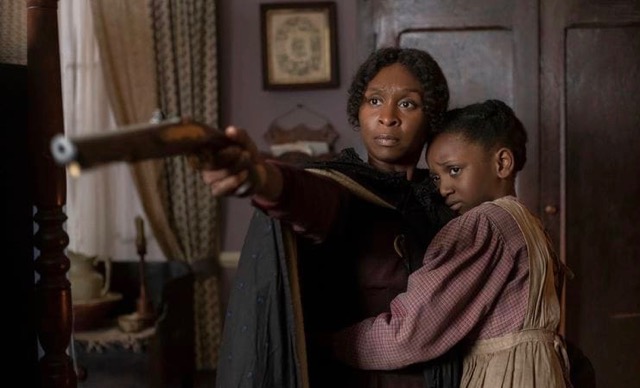 If you’ve been excited by the previews and waiting for the release of Kasi Lemmons’ new biopic of famed Underground Railroad conductor Harriet Tubman, thinking that it’s about time somebody brought this inspiring story of American heroism to the screen, your wait is over, although you may wish that the 125-minute movie wasn’t quite so…well, “ponderous” is how my wife described it.

Lemmons, who won praise in directing Eve’s Bayoumore than 20 years ago, co-wrote the screenplay along with Gregory Allen Howard (who wrote Ali and Remember the Titans), but it may be that their admiration for their heroine made them less able to write her story without giving it the weight of heavily-laden Important Speeches scattered throughout the film.

When we first meet Harriet (Cynthia Erivo of Bad Times at the El Royale and Widows), she is known as “Minty” (short for Araminta) Ross, and she is on her back experiencing some kind of vision, the result, we learn, of an overseer throwing a weight at another slave that accidently knocked her unconscious, causing brain damage and blackouts for the rest of her life—a condition that she believed “made God’s voice more clear.” When she opens her eyes she sees her husband John (Zackery Momoh of TV’s Seven Seconds), who is a free man living at a nearby plantation (a situation that was not particularly unusual in Dorchester County, Maryland, in 1849). Minty and John want to start a family and want their children born in freedom; accordingly, through John and her father, Ben (Clarke Peters of TV’s The Wire) Minty has contacted a lawyer who has looked into her late master’s will, in which he had instructed that Minty’s mother was to be freed when she turned 45, and her children with her. Well, we learn fairly quickly that there’s the law, and there’s the way things are, and the way they are here is that the current master owns Minty and intends to continue to do so, as well as any children she might produce.

But apparently Minty’s actions have been too much for the master, and he dies immediately after the confrontation and the new master of the plantation, the old man’s grandson Gideon Brodess (Joe Alwyn of The Favorite and Boy Erased) decides to sell her down the river. At that point she decides to run, making a daring escape from the pursuing Gideon by leaping off a bridge into a river, vowing to be free or die. It’s probably not a spoiler to reveal that she escapes, with the help of the Underground Railroad, and makes her way, alone, 100 miles to Philadelphia, where she is taken under the wings of abolitionists William Still (a real historical character played by Leslie Odom Jr., a Tony-winner for Hamilton) and Marie Buchanan (a fictional character created for the movie, played by Janelle Monáe from Moonlight and Hidden Figures). These two give her a place to stay and find her a job to support herself. Choosing a new name, her “freedom name,” she calls herself Harriet Tubman (Harriet after her mother, Tubman as the last name of her husband), but she cannot rest, knowing how many of her family members are still in bondage. Without the support of Still or the Underground Railroad, she takes off by herself back to Dorchester County to rescue her husband. When she returns she brings back nine runaway slaves, and Still is both astounded and relieved.

Again, it’s surely no spoiler to say that Harriet becomes the premier conductor on the Underground Railroad, ultimately making 13 trips to the south and bringing back more than 70 slaves, sometimes conducting them all the way to Canada—more than 500 miles—which becomes necessary when the U.S. Congress passes the Fugitive Slave Law in 1850.

All of these things are not really new to us though it is inspiring to see them portrayed in film. It isn’t until we get to the movie’s last scenes that we find something a bit surprising: Who knew that during the Civil War, Harriet Tubman actually led a force of Union soldiers in a raid in South Carolina that freed 750 slaves? In some ways, this feels like the climax the movie has been leading to: During her visions, Harriet regularly saw a great wave of people running to freedom. It is only at this point that we recognize what it was she was foreseeing. But from another point of view, the scene seems inconsequential—a kind of throwaway that isn’t part of the main story arc.

And this is one of the movie’s chief flaws: It chooses to focus on a story we already knew without showing us something different or surprising about the character. The best modern biopics, and I always go back to Spielberg and Tony Kushner’s Lincolnfor the prototype, pick one significant event in the protagonist’s life that encapsulates his/her essence, rather than trying to portray the entire life in a kind of “this happened and then this happened and then this happened” string of episodes. Lemmons and Howard try to combat this by making the long string of Harriet’s rescues into a narrative essentially unified by the monomaniacal obsession of Gideon Brodess, her former master (in the film. He is not a real-life historical figure), to recapture her. In many ways, Brodess could be the most interesting character in the movie, conflicted because of his former affection for Minty, with whom he grew up. But not enough is made of that relationship, and we are left wondering what exactly it was (was there a romantic interest there somewhere? And if not, why is he so obsessed?). Alwyn seems unconvincing in the part, largely because he isn’t given that much to work with. His main role here seems to be to represent the whole institution of slavery, so that in the end Harriet can lecture him with one of her Important Speeches about how “God don’t mean people to own people.” I can’t help but think this would have been better as a film if the plot had focused on that South Carolina raid that freed hundreds while showing the familiar parts of Harriet’s story in flashback.

This sober, reverent, “Big Speeches” attitude toward its subject matter steers the film out of biopic territory into the realm of hagiography. The archetypal hero motifs are clear enough without being overkill—Harriet plunges into the underworld of the river and emerges to be renamed in a kind of death-rebirth experience as she escapes from bondage. The interpretation of her blackouts and “visions” as messages from God may seem extreme but in fact it is completely in line with what Harriet thought of them herself. Even the casting of Harriet as the new Moses is not too much, since of course she was leading her people out of bondage and into the promised land of freedom, and since in fact slavecatchers in the South who did not know her real identity called her “Moses” in the wanted posters they posted. There is a scene in which, with Brodess and his slave catchers like Pharoah in hot pursuit, Harriet crosses a river while her charges wait frightened on the bank, but she is able to walk across without leaving her feet—it suggests both the crossing of the Red Sea and of the River Jordan, and that seemed a bit much to me. But where the film does go over the top is with the several Big Speech scenes, always accompanied by a rather intrusive old-fashioned swelling score, just in case you didn’t realize how Important this Speech was.

In other ways, though, the music is used quite deftly, and those are the places where old spirituals are used by characters, often to send coded messages to listeners. These are done a capella, and Erivo, who won a lead actress Tony for The Color Purple, has a haunting voice with which to deliver them. Her performance is the highlight of the film. She portrays Harriet with all her force and spirit, her stubbornness and her sometimes ill-placed love for family, and her absolute faith in the righteousness of her cause. Odom and Peters give memorable performances in smaller roles. The film has its flaws, but I’ll still give it three Tennysons, mainly on account of Erivo’s performance, and on account of the significance of the story being told.