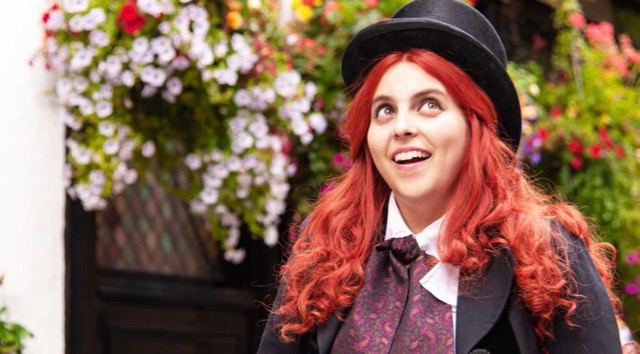 How to Build a Girl

There will never be a shortage of coming of age movies as long as people keep coming of age. Every generation gets its own set of them, and some are better than others. For every Ferris Bueller or The Graduate there are a dozen also-rans. But essentially, all such stories fall into the archetypal pattern called the “initiation story” (or “Bildungsroman”), in which the protagonist  with whom we identify has a significant experience that forces him or her to change, to mature, to become a different person—essentially to grow and mature into a more complex human being with a broader and less naïve view of the world. How to Build a Girl, a new film by director Coky Giedroyc (known chiefly for directing TV shows like Harlots and Penny Dreadful) based on the semi-autobiographical 2014 novel by Caitlin Moran (who also wrote the screenplay) is one of those better ones.

The film, now available through streaming on Amazon Prime and other sources, follows the up-and-down adventures of sixteen-year-old Johanna Morrigan (Beanie Feldstein of Book Smart and Lady Bird), a creative and imaginative girl living in the decidedly un-inspiring Wolverhampton, a city in England’s West Midlands 17 miles west of Birmingham. It’s a town known for its quirky local accent, a working class accent that Los Angeles-raised Feldstein does a reasonable imitation of throughout the film. She lives in a flat with her parents and four brothers, two of whom are twin infants that seem to have come as an unpleasant shock to her 38-year-old mother Angie (Sarah Solemani from Bridget Jones’ Baby and TV’s Him & Her), who seems to stagger through the film in a post-partem depression trance. Her father Pat (Paddy Considine from The Death of Stalin and TV’s Peaky Blinders) is a middle-aged wannabe rock star who illegally breeds border collies as he tries to find a way in to the music industry while the family seems to struggle in their tiny flat.

Dreaming of better things (“I want to burn! I want to explode! I want to have sexual intercourse with someone who has a car!”), Johanna has to share a room with her brother Kris (Laurie Kynaston of TV’s Cradle to Grave and The Trouble with Maggie Cole), who has his own creative streak—he self-publishes a music fanzine—but the two have a partition separating their individual sections of the room. The wall of Johanna’s side is covered with pictures of her idols, from Karl Marx and Sigmund Freud to Julie Andrews and Elizabeth Taylor to Sylvia Plath and the Bronte sisters, and when she is having one of her frequent personal traumas, the pictures speak to her, with sometimes questionable insights. Johanna is an overachiever at school, particularly in her English class, where she writes thirty-page papers to the chagrin of her long-suffering teacher. She gets her big chance to read one of her poems on TV in a Midlands teen-poet competition in Birmingham, but is too nervous to get through her “my pet collie is my best friend” poem and winds up talking about herself and her pet as Shaggy and Scoobie-Do. The upshot of her big TV appearance is that the popular kids, to whom up to now she’s been invisible, greet her with Scoobie references.

It’s brother Kris who gets her out of her rut. He draws to her attention an ad from a London magazine called Disc & Music Echo( D&ME), asking for potential reviewers to send in samples of their writing, and Johanna submits a rave review of the soundtrack to the musical Annie. (This is the point at which we realize the movie is not set in contemporary Britain, not only because she listens to the music on a cassette tape, but also because she writes the review on a manual typewriter, without a computer in sight.). Much to our surprise, Johanna actually gets an interview. But it’s only because the smug, self-important (all male) snobs who run the magazine want to settle a bet as to whether the person who wrote the Annie review is actually real. But with a show of gumption we haven’t seen in Johanna before, she convinces the hipsters to give her a chance, and gets a freelance gig covering a local band. It all seems pretty far-fetched, but it actually did apparently happen much this way in Caitlin Moran’s career—this is the “semi-autobiographical” stuff.

Johanna decides she needs to become someone completely different in order to be the rock critic she intends to be, and, looking in her closet, finds that she has “Nothing to wear for who I need to be.” So she dyes her hair a bright orange-red, dons a new top hat and fishnet stockings, and gives herself a new name—“Dolly Wilde.” And she immerses herself in the Midlands music scene, joyously embracing rock ‘n’ roll. When she has begun to establish herself as a stringer for D&ME, she convinces the powers that be to let her write a feature: Her first interview is with an unusually sensitive and generous singer-songwriter named John Kite (Alfie Allen, best known as Theon Greyjoy in TV’s Game of Thrones). But when her interview comes in as an adolescent fangirl piece, the pretentious D&ME snobs write her off.

But before abandoning her burgeoning career just yet, “Dolly” gets a bit of advice from one of the D&ME wankers: There are only about twenty popular music acts at any one time that can have any real impact, and the magazine’s job, he says, is to thin the herd by driving out mediocrity. “Everyone my whole life has lied to me,” she says at that point. “A nice girl gets nowhere,” and Johanna decides she must change again, to become the acid-penned, impossible-to-please music critic bitch that the magazine wants her to be. She embarks on a career that brings her fame and fortune while she trashes artists like Joni Mitchell and Eddie Vedder to the applause of her peers, while alienating herself from her parents, her siblings, her teachers, and anybody else who gets in her way (or who actually cares anything about her).

As you can probably guess, things don’t continue this way, and Dolly/Johanna comes to another fork in the road, which she takes, but I won’t reveal the ending to you with any spoilers. Though I do want to note that Emma Thompson makes an appearance toward the end of the movie in a cameo role as an influential editor. Ultimately, the film does follow the typical initiation-story arc, from endearingly naïve Johanna through a series of experiences that make her older and wiser Johanna.

Moran’s screenplay does at times push the limits of credulity with its sudden outrageous reversals of Johanna’s character, though since it is after all about “building a girl” it seems meant to reflect adolescents’ “trying on” different personae in their quest for selfhood. Besides, in a film where wall pictures come to life and talk to characters, we’re not really in the world of everyday reality, are we? And the script does crackle throughout with quick and sometimes outrageous wit. This movie is hilarious, and director Coky Giedroyc displays a real feel for the emotional upheavals of teenaged existence. Beanie Feldstein, who has already turned in impressive performances in her previous films, is watchable and believable as 16-year old Johanna (even though she is a decade older than the girl she is playing). It probably is about time Feldstein graduated from playing the uncool, unpopular bookish high school girl who proves to be superior to those bullies who keep her down. At least, before she hits 30.

I do hope this film finds an audience in these streaming days of film viewing. Set in the early ’90s—about the time its star was actually born—does it have the appeal to current teenagers that a more contemporary setting might encourage (as in something like the current Banana Split, where the main character has a similar character arc)?  I have a feeling that How to Build a Girl has a universal enough theme, and a funny enough script, that it will find that audience. Three Tennysons for this one.