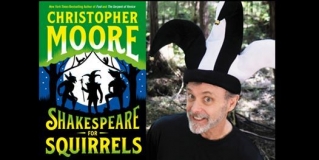 If you are a casual Christopher Moore fan, you probably know him best as the author of Lamb, the boldly comic but oddly reverent Gospel according to Biff,  Jesus’s childhood friend. Or perhaps you are a new initiate to the Moore absurdist comic canon, and found him first in his recent parody of the hard-boiled detective genre, Noir, which debuted at No. 3 on the New York Times bestseller list in 2018. After 17 successful novels, Moore has enough eager readers to make expectations of such debuts typical.

The other novel that you might know of, even if you’re not a Moore aficionado, is Fool, his wildly irreverent 2009 parody of Shakespeare’s King Lear, told from the point of view of the most famous fool in all of Elizabethan drama. Moore’s fool, whose full name is Pocket of Dog Snogging upon Ouze, reappears in a darkly comic 2014 sequel, The Serpent of Venice, which parodies Shakespeare again in a mashup of Poe’s “A Cask of Amontillado” and The Merchant of Venice. And now, just when we need another hardy laugh in the face of dark absurdity, Pocket is back in a third Shakespearean sendup, this time of the Bard’s most performed play, A MidsummerNight’s Dream.

In an extravagant comedy even more manic than Shakespeare’s own, and with a body count higher than Lear and Hamlet combined, Moore’s new novel, Shakespeare for Squirrels, begins with a situation more reminiscent of Twelfth Night than MND: Pocket, having spent the time between the Shakespearean-imagined Venice and Athens on a pirate ship, has been cast adrift, along with his brawny but decidedly un-brainy apprentice Drool, and his clever but unreliable pet monkey Jeff, and just as the trio are about to perish from hunger and thirst and exposure, they wash ashore at Athens. Not the classical Athens of the historical Theseus (if there ever was one), but the imagined never-neverland of Shakespeare’s comedy.

It’s not long before local guards, employed by Duke Theseus, stop these illegal aliens because they have no papers, and arrest Drool while Jeff runs off into the trees, not to be seen again until near the end of the book, except for occasionally snatching people’s hats in order to perform lewd acts upon them. Pocket needs to find a way to free Drool. In the meantime he meets the fairy Cobweb, one of the minions of the fairy queen Titania. Cobweb more or less adopts Pocket and becomes his guide, adviser, and sometime lover as he weaves his crooked way across Athens. He also meets Robin Goodfellow, a.k.a. the Puck, who is himself the fool or jester to the court of Oberon—in Moore’s version, the king of the goblins rather than the fairies. Puck is a truly magical being, whom it turns out everybody just finds annoying. Things get more complicated for Pocket when he discovers the Puck has been murdered, pierced through by the dart of a crossbow that could have been fired by one of Theseus’s guards or, he realizes, by one of Oberon’s goblins. At this point some of Moore’s previous novel, Noir, bleeds through, and Pocket becomes the hard-boiled detective trying to solve the case of “Who killed Robin Goodfellow?”

Along the way Pocket comes across a group of “rude mechanicals” in the forest, including Peter Quince and Snug the Joiner and all the rest, rehearsing their version of “Pyramus and Thisbe” to be presented to the court of Theseus on the occasion of his wedding to the captured Amazon queen Hyppolita (who, by the way, has no desire to be married to the guy who “won” her by beating her people on a battlefield). Pocket, with his own long experience as a performer, gives the group a number of acting pointers, so that they begin to see him as their dramatic coach and guru. Pocket also runs into the young lady Helena, who complains of her treatment at the hands of Demetrius, who with the encouragement of Theseus’s counselor Egeus has left her for Egeus’s daughter Hermia, who wants to marry Lysander instead. So those crazy kids form a complicated background to the plot.

I don’t want to give away the ending with any spoilers, but I do want to add that Bottom, in his transformed ass-headed state, plays a large role in the story, and that the little Indian boy over whom Titania and Oberon are fighting turns out to have a pretty interesting history himself. In addition, Moore brings in, to hilarious effect, the bizarre Prologue character from Shakespeare’s Henry I, part 2, introduced with the stage direction “Enter Rumour, painted full of tongues.” One more thing, and I hate to reveal this but the title doesn’t make sense without it: You know all those fairies that attend on their queen Titania all through the night? Turns out that the reason nobody sees them during the day is that they turn into squirrels in daylight hours. Hence the title of the book. It does come as something of a shock to Pocket to realize that his relationship with Cobweb has involved a good deal of squirrel shagging. But what the heck. Titania’s been sleeping with an ass.

Everybody remembers with affection the hysterical ending of Shakespeare’s Midsummer Night’s Dream, wherein the rude mechanicals’ play-within-the-play caps off the restorative comic catharsis through which all true lovers are united. But Moore’s version, though absurdly comic in a black-humor sense, functions more like a tragedy, and the players’ performance at the end resembles more closely Shakespeare’s other play-within-the-play, the one in Hamlet, staged by the melancholy Dane himself to “catch the conscience of the king.” Here, Pocket rewrites the play as a version of the events he’s just lived through, hoping to get to the bottom of things, and ultimately directs the play with not only the original tradesmen but fairies, goblins, and Jeff. Both he, and we, wonder how it’s going to turn out:

“I confess, a wall of worry rises for even the most confident fool when he realizes his plot for saving the day lies with three squirrels, a troupe of earnest nitwits, a donkey-headed weaver, a silver-thirsty goblin, a notoriously unreliable narrator, and a hat-shagging monkey. And the narrator and goblins hadn’t even arrived yet!”

Pocket’s play has a more lethal denouement than Hamlet’s did, and demonstrates that Moore has a broader knowledge of Elizabethan drama than just Shakespeare. The motif of the “play within the play” utilized in Hamlet has its origin in the first popular revenge tragedy in Elizabethan theater, Thomas Kyd’s Spanish Tragedy, in which the avenger, Hieronimo, stages a court masque in which guilty members of the court are killed during the performance of the play. The device became an expected motif in English revenge tragedies, and is repeated with similar deadly results in plays like Thomas Middleton’s Women Beware Women.That’s the kind of play we’ve got here.

Shakespeare for Squirrels is a wild ride, but one that fans of Moore will definitely want to take. Fans of Shakespeare will probably find it a loving if cheeky salute to the bard’s most popular play. And if you’re a fan of absurdist fiction like  Slaughterhouse-Five,The Sot-Weed Factor, or Catch-22, you might find a kindred sensibility here as well. Three Shakespeares and half a Tennyson for this one.

How to Build a Girl
Scroll to top