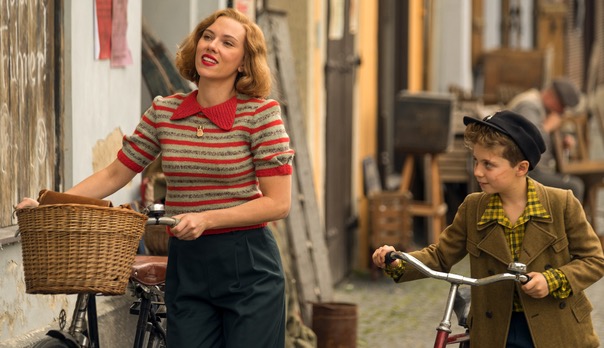 In Mel Brooks’ The Producers, as many readers will surely recall, the two protagonists, Broadway producers Max Bialystock and Leo Bloom, hit upon a scheme by which they can make more money on a flop than on a hit, and they put together a show that they figure is a surefire disaster: a pro-Nazi musical called Springtime for Hitler. To their amazement, the show, viewed ironically by audiences, becomes a smash Broadway hit.

There is more than a passing similarity between that plot and Taika Waititi’s Oscar-nominated film Jojo Rabbit, which, finally, months after its wide release in the United States on November 8, has made it to central Arkansas, where you can see very limited showings of it on two screens. The protagonist of the film is a 10-year-old Hitler Youth who makes up for being something of a misfit by fanatically supporting Nazism and by talking to his imaginary friend, a ridiculously puerile Adolph Hitler (played with clownish relish by Waititi himself). The film surprisingly took home the top “People’s Choice” Award at the Toronto Film Festival in September, and currently has a 95 percent positive audience rating on the Rotten Tomatoes—much higher than the more mixed reviews of critics, especially among those listed as “top” critics (many of whom complained that the film was too upbeat in the face of the unmitigated horror of the Holocaust, and that the film suggested there were some Nazis who were “good”).

Such criticism suggests that Waititi’s film belongs in the same category as the current occupant of the White House’s infamous “Very good people on both sides” remark. Nothing could be further from the truth. Joao Rabbit is closer in spirit to those medieval Morality Plays that depicted the devil as an incompetent, clownish buffoon. There is some comfort in knowing that the devil is an ass. Nor is it really true that the laughable depiction of Nazis in the film has the effect of trivializing the Holocaust, as some critics are saying. Waititi is not trying to make Schindler’s List. Somebody already did that. We are seeing through the eyes of a 10-year-old German boy who does not see the death camps but does see people from his own town hanged in the street as traitors to the German nation—and who meets a Jewish girl in hiding, facing death if she’s caught. Nazism is not all that soft-pedaled here.

Nor, it seems to me, is Waititi’s screenplay (adapted from New Zealand writer Christine Leunens’ novel, Caging Skies) intended solely as historical fiction reflecting the realities of Nazi Germany. The current resurgence of right-wing politics worldwide is a danger that Waikiti’s film recognizes as well, and 10-year-old Jojo, brainwashed and consistently fed lies by the media to which he is exposed, is a perfect emblem of the 21st-century true-believing fascist. As one of the characters tells Jojo late in the film: “You’re not a Nazi, Jojo. You’re a 10-year-old kid who likes dressing up in a funny uniform and wants to be part of a club.” Aren’t they all?

I suppose the critics who claim that the film suggests “some Nazis were good” are thinking of Sam Rockwell’s character, Captain Klenzendorf, a one-eyed veteran who has actually seen battle and who knows that Germany will lose this war, and who is Jojo’s skeptical and often inebriated Camp Counselor for his Hitler Youth group. All Kenzendorf can do is look forward to a glorious defeat dressed in a beautiful uniform he is designing for himself, admire Jojo’s mother and surreptitiously do what he can to help a few people. But it seems quite clear that Klenzendorf, with those unusual motivations, is the exception that proves the rule in this town, and that the fanatically clownish Fraulein Rahm (Rebel Wilson) and the slimily insidious Gestapo officer Deetz (Stephen Merchant of TV’s The Good Place) are far more typical. As are the senior Hitler Youth, who find it entertaining to wring the neck of a defenseless rabbit that Jojo has been too decent to kill when they tried to goad him into it.

That happens quite early in the movie, and it’s where Jojo gets his nickname, intended from the first as a slur. But it’s not the first scene: The film opens with Jojo (newcomer Roman Griffin Davis) worrying about his upcoming camp experience, and his imaginary buddy Adolf giving him a pep talk and telling him to “Heil me, man!” before the film moves into its opening credits, shot over black and white vintage World War II footage showing hordes of Germans giving the Nazi salute, over which is playing the Beatles’ German version of “I Want to Hold Your Hand”: “Komm Gib Mir Deine Hand”—i.e., ironically, “Come Give Me Your Hand.”

Ultimately Jojo’s unthinking fanaticism is challenged by his own natural revulsion at the idea of killing an innocent creature (the rabbit), and later by seeing several of his fellow citizens hanged in a public square for crimes against the state—an awful exhibition his mother Rosie (Oscar-nominated Scarlet Johansson) forces him to take in as if to get him to look directly at the real-life implications of the cause he is mindlessly following. When Jojo asks what these people did to deserve hanging, she only answers “What they could.” Finally, Jojo must face the fact of a 16-year-old Jewish girl named Elsa (Thomasin McKenzie of The Hobbit: Battle of the Five Armies), whom his mother is hiding in their attic. At first, Jojo decides to question Elsa about the secret lives of Jews, intending to put all the facts he wrings from her into a book that he dreams will make him popular with the Nazi leaders. He asks her a series of ludicrous questions about where Jews hide their horns and whether they sleep upside down, hanging from the ceiling like bats. Elsa’s deadpan serious responses form the perfect reductio ad absurdum to Jojo’s preposterous ethnic slurs, though he is too naïve to realize it, at least at first. Ultimately, and predictably, his feelings toward her grow from conditioned revulsion to attraction and infatuation, though he keeps up the façade of questioning, and in a jealous mood composes phony letters from Elsa’s boyfriend (whom she says is fighting with the resistance) breaking up with her.

Elsa, of course, is in real danger—as is Jojo’s mother. And then there’s Jojo’s imaginary friend, who more and more aggressively pours in his ear his distrust of the Jew Elsa, who is, after all, vermin. The film is itself essentially a Morality play with Jojo as the Everyman figure being drawn in one direction by the demonic Hitler and in the other by his angelic mother Rosie over the question of what to do with Elsa.

There would be spoilers galore if I went any further. But this is a memorable film because of its unique premise and its striking execution. Waititi, most widely known for directing the blockbuster Thor: Ragnarok, began with independent films often descried as “quirky,” and in Jojo Rabbit he revisits that genre. But it’s a quirkiness that resonates. Filmed mainly in the Czech Republic, the film is beautiful to look at, with its old European settings, and Ra Vincent and Nora Sopková copped one of the film’s six Oscar nominations for their production design. The score is sometimes nostalgic, sometimes surprising, though nothing is quite as jarring as that Beatles intro. Jojo and Elsa are fascinating to watch as their relationship grows from antagonists, to big sister/bratty little brother, to schoolboy romance/tolerant older girl, to real friendship. And Johansson (who I used to think wasn’t much of an actress and was only cast so directors could give us closeups of her beautiful but expressionless face) turns in an Oscar-worthy performance here that’s enough to make me eat my words. The idea of depicting the arch-villain Hitler as a buffoon is not original: Chaplin did it in The Great Dictator and, really, the concept goes back to the devils of the fifteenth century. But it seems fresh in 2020, and results in a film that both instructs and entertains. I’m going to go ahead and give this one four Shakespeares.