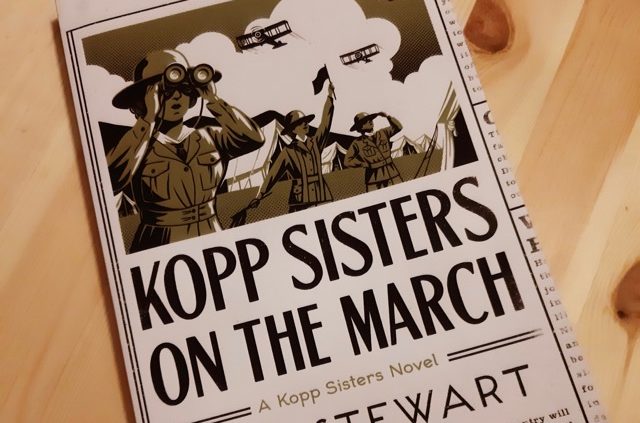 Kopp Sisters on the March

Amy Stewart’s “Kopp sisters” novels are feminist literature in the classic sense. That is, they explore, define, and analyze the historic situation of women in the early years of the last century; by demonstrating the unequal and often appalling gap in the political, economic and social rights and status of men vs. women at that time; they indirectly advocate for the permanent elimination of those inequalities; and by presenting as protagonists women who, ahead of their time but not anachronistically so, applaud the heroism and sacrifice of such women, presenting them as figures to admire and to emulate.

Stewart was already a successful non-fiction author of books on gardening, like her 2013 New York Times bestseller The Drunken Botanist, before embarking on her series of novels about three sisters living on a New Jersey farm more than a hundred years ago. The spark was a collection of newspaper articles she came across while researching her botanical books concerning one of the first female deputy sheriffs in American history, Constance Amelie Kopp. If you go to Ms. Stewart’s author website, you can read short descriptions of the historical Constance and her sisters, as well as other characters from the books. Constance herself, according to the website, was born in 1878 and so was 35 years old in Stewart’s first novel, Girl Waits with Gun. She is 39 in the current (fifth) novel in the series, Kopp Sisters on the March. Constance was, according to newspaper descriptions, six feet tall and weighed 180 pounds, though as the Kopp sisters books will teach you, you really can’t believe much of what you read about women in the papers, at least in 1913. A clear image of Constance’s character is revealed, however, in a statement she once gave a reporter, quoted on Stewart’s website: After indicating that she had no interest whatsoever in marriage, she went on to say “Some women prefer to stay at home and take care of the house. Let them. There are plenty who like that kind of work enough to do it. Others want something to do that will take them out among people and affairs. A woman should have the right to do any sort of work she wants to, provided she can do it.”

Stewart fictionalizes Constance’s adventures, but does base them on facts as revealed in what sources are available. Constance has two sisters: Norma, five years her junior, is a curmudgeon who runs the no-nonsense household of the farm without a lot of sympathy for any weaknesses the others show; and Fleurette, the much younger and much spoiled teenager who, it is revealed in the first novel, is actually Constance’s daughter born when she herself was 19 and raised as a daughter by Constance and Norma’s mother.

The first four novels of the series focused on Constance’s career as a deputy sheriff under the progressive and humane Sheriff Heath in Bergen County, N.J. They concern the obstacles she faces in the male-dominated politics of the 1910s, and her struggle for recognition as an officer capable of doing the same job as the other (male) deputies, as well as acting as matron for the women prisoners in the county jail. These novels introduce us to eye-opening social injustices of the time, which allowed parents to have daughters arrested as “incorrigible” if they left home to get jobs and live by themselves, or allowed husbands to have wives committed as mentally incompetent without a judge ever having to examine the woman herself. But by the end of the fourth novel, Miss Kopp Just Won’t Quit, Constance has been downsized when the newly elected sheriff decides there is no reason to employ a woman deputy when a man can obviously do the job better. The voters (all men, remember, at the time) agree.

Kopp Sisters on the March begins six months after Constance’s dismissal from the Benton County Sheriff’s office, in the spring of 1917. With Europe in the throes of brutal war, Americans are preparing for what they anticipate will be their own inevitable participation, and Norma has coerced Constance and Fleurette to join her in enrolling at a six-week National Service camp for women, based in Chevy Chase, Maryland, whose avowed goals were to train women for the tasks that will be required of them to support the war effort—both on the home front and, in some cases, with the army in France. Constance is simply hoping to get out of the funk she’s been in since losing her deputy job, while Norma is hoping to pique the army’s interest in using the homing pigeons she breeds and trains for carrying messages on the battlefield. Fleurette is mainly just along for the ride, though she does hope to get vaudeville star May Ward to come to the camp to entertain the women, and hopes to take the stage as one of Miss Ward’s backup singers.

Constance suffers a major letdown when she discovers that “preparing women for war service” means, to the men in Washington, teaching them to roll bandages and make beds in a military style. U.S. military leaders had made it clear to the public that the intent of these camps was decidedly not to “produc[e] a modern Amazonian corps.” So the women are given wooden toy guns to march with, but camp officials have no intention of teaching women to shoot real weapons , or to do anything that would actually benefit any of the women who might end up in France and find themselves in a war zone. Constance does find classes in signal corps codes intriguing, through which she is introduced to the story of the new U.S. Bureau of Investigation, designed to ferret out and combat German spies. But other than that, the camp is something of a bust. That is, until an accident to the camp’s matron winds up putting Constance herself in charge of the camp, and allows her to train a small group of the women, those fully intent on joining the war effort in France, in shooting and in martial arts. Secretly, of course.

A further wrinkle in the story comes from one of the Kopp sisters’ tent mates, Beulah Binford. Based on a real-life Richmond woman who had been caught up in a scandalous murder story in which a man she had been in involved with had killed his wife. Beulah, in real life as in the novel, had been made notorious by newspapers all over the country, which had printed her picture and presented her as a notoriously scarlet woman, though she was never implicated, never called to testify in the trial, and never asked by any journalist to give her own side of the story. Much of the novel proceeds in flashbacks from Beulah’s life, and she has come to this camp under an assumed name in the hope of getting a second chance, going to France and starting a new life. How her story ends, and how it becomes entwined with that of the Kopp sisters, I won’t reveal since I don’t want to spoil the book for you, but just so you know, the bang-up conclusion of the novel does offer a lot of satisfaction.

This novel boasts much of the same historical feminist insight as the previous four, helping us experience what the lives of real women in 1917 must have been like. You may find, if you have read the previous four books, that his one may contain less humor than those, and that it may reduce focus on the Kopp sisters (especially Norma and Fleurette) at the expense of its concentration on Beulah. It may also be a bit less focused than previous books—it has a kind of transitional feel, as Constance is moving from her career as “lady deputy” to what I can only assume will be a career with the Bureau of Investigation, the goal on which she has set her sights by the end of the novel. We’ll have to wait until January 2021 to see how that works out, in the sixth installment of the series, Dear Miss Kopp. But you should definitely give this book a read. Three Tennysons for this one.

Ada Limón’s “Instructions on Not Giving Up”
Scroll to top