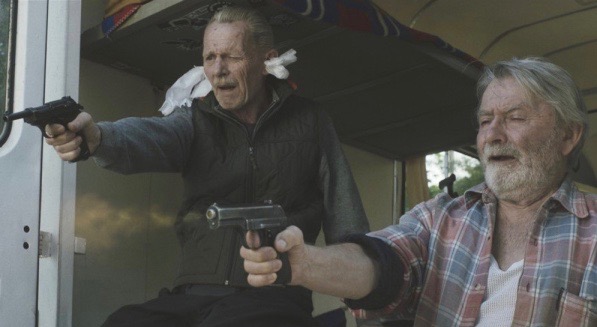 Foreign language films have never been hugely successful in the United States. For every Crouching Tiger, Hidden Dragon, there are a hundred less popular films that make a tiny ripple at some small festival or get a few screenings in some art house in New York but go unrecognized through the rest of the country. After all, Americans don’t want to read a film. They see no need to learn any foreign language when all they need to do is shout louder in English. But I digress. Perhaps that attitude is beginning to change. The recent Netflix success of Roma and, more spectacularly, of Parasite may signal a new more widespread appreciation of foreign-language films, especially when delivered in convenient, streaming form.

And so it may be that the current housebound status of most Americans, while cutting deep into the profits of blockbuster Hollywood films aimed at huge summer audiences, may be a boon to smaller films taking advantage of this new kind of film marketing. And so it may not be a disaster that Little Rock’s Czech That Film Festival, in its ninth year in 2020, has decided to screen its films online because of the Covid-19 pandemic. These films are available, one each week for the next several weeks here. The first film of the festival, which was available from April 27 through May 3, was the film Staříci, that is, “Old-Timers” in English. This film won the Czech Film Critics’ Award for best film of 2019, and also came away with the award for Best Actor for its star, the well-known and highly acclaimed Czech actor Jiří Schmitzer. Schmitzer also won the Best Actor award at the 27th Czech Lion Awards (his fourth such award), and his co-star Ladislav Mrkvička won the Czech Lion for Best Supporting Actor. The directing team of Martin Dušek and Ondřej Provazník, who were previously known for directing well-received documentaries like A Town Called Hermitage (2007) and Coal in the Soul (2010), also won the Czech Film Critics’ Award for Best Director. For Dušek and Provazník, who also wrote the screenplay, this was their first narrative feature film.

The kernel of the story was planted in 2008, when Dušek saw a story about two elderly former Czech political prisoners, interned under the communist government of the 1950s, who had sought in 2000 to assassinate the former communist prosecutor who had sent them to prison. Their revenge had been thwarted when one of the octogenarians had succumbed to old age during the quest. Dušek was fascinated by the story and approached Provazník about making a documentary about the incident, but Provazník thought it would work much better as a feature film, and so Old-Timers was conceived.

It’s amusing to take a look at the Czech That Film festival’s online Q and A session with the directors here. Apparently Dušek and Provazník thought that one thing that would make directing a feature film easier than a documentary was that they didn’t have to work with “real” people, and could simply tell the actors what they wanted them to do and they would do it. Veteran actors Schmitzer and Mrkvička disabused the directors of that notion fairly quickly, apparently, and at least to hear the directors tell it, the actors spent a lot of time on the set so angry at their directors that they were afraid the actors would come after them with their guns rather than the former communist prosecutor. In the end, though, that anger seems to have been channeled into their performances, and made them even more convincing.

The film begins as the elderly Colonel Vlastimil (“Vlasta”) Reiner (played by Schmitzer, who was only 69 at the time of filming but looks at least 15 years older in the film) returns to the Czech Republic from the United States, where he has been living for some years. In his luggage he has brought a shotgun from America, which airport officials seize and will not allow him to bring into the country, despite his irascible complaints. Vlasta is picked up at the airport by his old friend Antonín (“Tonda,” played by Mrkvička, who looks every bit of his 84 years).  We soon learn that this is not just a meeting of a couple of old friends getting together for one last bash. Vlasta and Tonda are World War II veterans who were imprisoned by the Czech communist regime in the 1950s; the old communist prosecutor who had sentenced them to brutal confinement, and had finally come to trial for his crimes against his fellow countrymen during that period, had been released by the court rather than sentenced for his offenses. This last injustice they cannot bear, and the two old men, both in declining health themselves (Vlasta is in a wheelchair and Tonda is hard of hearing and seems befuddled at times) set out to exact their own kind of justice on the old villain. Tonda is less gung-ho than his friend, and needs some convincing to track down this man who oppressed his own fellow citizens, but Vlasta convinces him. “I went through the Gulag,” Vlasta says at one point, “but the worst butcher was here.”

And so begins a highly unconventional road movie, with two superannuated buddies on a quest to exact revenge for something the rest of their society seems to want to ignore—it all happened so long ago, why does it matter anymore? It’s not exactly Hope and Crosby, but there is a good deal of dark comedy in this road trip: Tonda, prevented by his son and grandson from taking his ancient camper van out on the road, ends up stealing the van at night by hotwiring it. He also refuses to go on the trip without his pair of faithful dogs, Max and Beti, who end up causing some problems later. The funniest scene in the film occurs when the two vigilantes, in need of weapons since Vlasta’s gun has been confiscated, visit the farmstead of a former communist collaborator where Vlasta had hidden a stash of weapons in a crumbling wall more than 50 years earlier. The old collaborator’s family, taking Vlasta to be an old friend of their aged relative, invite him to lunch, at which the petulant Vlasta pulls no punches in telling them what an awful person that old man was. Meanwhile Tonda is smashing through a colorful new façade the family has placed over the old crumbling wall, and has retrieved the guns.

Since I want to recommend that you see the film yourself, I don’t want to spoil the ending. Suffice it to say that there are other obstacles that need to be overcome (including—one small spoiler—the wheelchair-bound octogenarian Vlasta disarming a policeman one quarter his age). This is a quirky film that I suspect most viewers will enjoy. Schmitzer and Mrkvička make a crusty but watchable pair of “grumpy old men” and the story of the film is fascinating in itself. The image of Tonda smashing through the colorful new façade to reveal the crumbling decay within is as striking a metaphor as could be imagined for a modern Czech society trying to ignore a past it would rather not be reminded of.

Some viewers might wish for a little more backstory about the two men’s relationship and their imprisonment, but at a brisk 90 minutes the film has been stripped of much of that exposition. Directors Dušek and Provazník have said they wanted to make the film more universal than simply being about long-smoldering resentments against the old regime. In a sense the story is a universal statement of the burning passions that may still lie in the hearts of elders whom we may tend to underestimate. Nobody in the film, or in the film’s audience, thinks that old van is going to start. But it does.

Three Tennysons for this one. It’s no longer available on the Czech That Film Festival site; I hope you can find it elsewhere. This week, the film being screened on the site is Karel, Me and You, which the website describes as a “dramedy” that “portrays relationship ups and downs of thirty-somethings living in Prague.”

Kopp Sisters on the March
Scroll to top