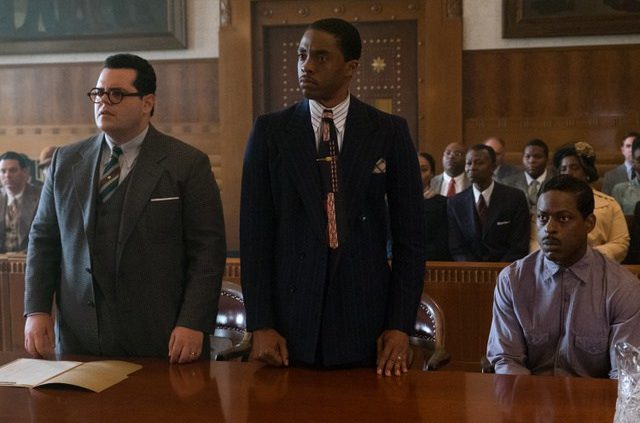 Since Steven Spielberg and Tony Kushner showed us, in the successful and acclaimed Lincoln in 2012, that a biopic does not have to be an unwieldy womb-to-tomb conglomeration of scenes in something like, for example, Bernardo Bertolucci’s epic The Last Emperor (1987), in which an entire life is put on display for a few hours and a common thread is sought to give the story unity. Instead, the new biopic tends to pick one significant event from the subject’s life that in some way epitomizes what that person means or what that person stood for, and to explore that particular incident as fully as possible. In the case of Marshall, director Reginald Hudlin (House Party) and his writers, Jacob and Michael Koskoff, choose to focus on a single case early in the career of Thurgood Marshall, a quarter of a century before Lyndon Johnson appointed him the first African American U.S. Supreme Court Justice.

The film focuses not on what might have been the obvious choice—Marshall’s victory in “Brown v. the Board of Education,” the Supreme Court case that made school segregation illegal in the United States—but on Marshall’s work in the little-known “State of Connecticut v. Joseph Spell,” a case the 32-year old Marshall took on early in his career as the NAACP’s top lawyer. Politically, it was important at the time—January 1941—to show that cases involving bias in the courts were not limited to the South, and to elicit contributions to the NAACP from some wealthier supporters in the North. These motives are not always clear in the film, but for the most part the filmed depiction of the trial follows the actual case fairly closely, except for one particular revelation that causes a dramatic turn in the movie, but which in reality was clear from the beginning of the case.

Chadwick Boseman plays Thurgood Marshall. This marks the third time in five years that Boseman has been tapped to play a trailblazing African American icon (He was Jackie Robinson in 42 and James Brown in Get On Up). But I wouldn’t worry about these parts limiting his choices of roles down the road. He appears next year as Marvel’s Black Panther, which I’m pretty sure will determine the course of his future career. His foil and co-counsel in the film is Josh Gad playing local Connecticut lawyer Sam Friedman. Gad, who earned a Tony nomination for his starring role in Broadway’s Book of Mormon, may be best known for voicing Olaf in Disney’s Frozen. As the Jewish lawyer pushed into the Spell case against his own better judgment, Gad’s character here is really the most interesting one in the film, the one that goes through a dynamic change. Marshall is compelling for his intrinsic identity and focus, and Friedman provokes empathy through his evolution. (Or something like that. I want you to be careful not to seem to favor the white character.)

The film opens with Marshall in Oklahoma, defending a young black man in danger of execution after the police had beaten a false confession from him. This is immediately contrasted by a scene in which Friedman successfully defends an insurance company when they refuse to pay off a claim from a claimant in a wheelchair. Though he seems conflicted by his victory for his reprehensible client, this is not the guy you assume will turn out to be a powerful advocate for civil rights. His partner and brother Irvin, however, has promised the local NAACP rep that Friedman will plead with the court to have Marshall (who is not a member of the Connecticut bar) admitted as counsel for the defense in the Spell case. Supposedly, that’s all Friedman will be asked to do.

The case is hardly one that Friedman would ever have taken on his own: A To Kill a Mockingbird-type case in which Spell, a black chauffeur with a spotty record (Sterling K. Brown from T.V.’s The People vs. O.J. Simpson and This Is Us), is accused of rape by his white employer Eleanor Strubing (Kate Hudson, last seen in Deepwater Horizon), who claims he also tried to kill her by throwing her off of a bridge. But Friedman is forced to conduct the defense himself—though he has never been a trial lawyer before—because Judge Colin Foster (James Cromwell), who happens to be a family friend of the prosecutor, Loren Willis (Dan Stevens of T.V.’s Downton Abbey), rules that while Marshall can advise Friedman as co-counsel, he is barred from speaking a single word in the courtroom.

Gad is remarkable here, and we are allowed to see something of his family and social life. The background of his family in Europe and their oppression under the Nazi regime form a mute but powerful background to the racial injustices in the film, and begin to provide a motivation for Friedman’s conversion. Hudson manages to be sympathetic in her role as Potiphar’s wife to this new Joseph, and Brown comes across as a complex and layered character rather than simply a sympathetic potential martyr. Cromwell has less opportunity in this script to go beyond his role as a biased and bigoted judge, and the same is really true of Stevens as the prosecutor. But a look at the accounts of the trial itself that lies behind the film suggests that the depiction of the prosecutor is in fact fairly accurate.

The characterization of Marshall himself, though, must be at the center of this film. The task is difficult for Bozeman, as we are given what is essentially a traditional courtroom drama in which our protagonist is forced to remain silent: Think A Few Good Men with a mute Tom Cruise. Or what turns into a buddy movie in which the straight man has no lines: Think Rainman with…well, a mute Tom Cruise. In any case, Marshall is seen directing the trial from behind the scenes with Friedman as essentially his marionette. We also witness him chafing at the collar put on him by the judge, and exploding into high rhetoric with the reporters outside the courthouse when he is unmuzzled. He comes across as an articulate and savvy crusader for racial justice, confident at times to the point of arrogance in his public life. His private life is hinted at with a few obligatory scenes with his wife regarding their difficulties in having children, but one flaw in the movie is the scarcity of these private moments and the failure to integrate them into the overall depiction of the man, whose inner life remains something of a mystery to us.

More of a hole in the film is, I think, its failure to address the concern that Friedman brings up about the motivations of Marshall and the NAACP in the specific case of Joseph Spell. Early in the film, Friedman refuses to give the case to the communist party lawyers, because he believes they will use Spell as a kind of martyr for political capital. Later he wants to know if Marshall and the NAACP are doing the same thing. He never gets an answer. Perhaps the filmmakers have left the question open to allow the audience to decide for themselves. If so, the answer is ambiguous. Or perhaps they forgot they raised the question at all. If so, they really should have answered it.

Still, this is a thought-provoking and well-acted film on limited screens in a week where the three big, multiple-screen and heavily hyped films had Rotten Tomatoes ratings of 7 percent, 10 percent, and 8 percent. I think of it as a gift horse whose mouth I’m not looking in too deeply, and I’m giving it three solid Tennysons.

William Carlos Williams’ “This Is Just to Say”
Scroll to top