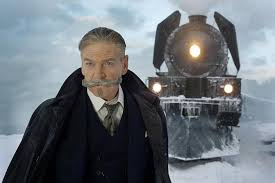 Murder on the Orient Express

Kenneth Branagh’s new film is a throwback in a lot of ways, being a remake of a 1974 film that was based on a 1934 novel that has no superheroes, no zombies, no explosions, no gunfights or fistfights, not even any sex. It’s just an old-fashioned whodunit in which a rather eccentric detective mainly talks to people and solves a mystery. In that way, it’s not unlike one of the most popular feature films of 1934—the year of Agatha Christie’s novel: The Thin Man, with William Powell and Myrna Loy.

No doubt part of the success of The Thin Man was due to the star power of the team of Powell and Loy. Just as Sidney Lumet’s 1974 version of the story owed much of its success to the fact that Lumet (a five-time Oscar nominee for films like Network, Dog Day Afternoon and The Verdict) was able to employ a veritable who’s who of Hollywood stars to ride his train, including Lauren Bacall, Sean Connery, John Gielgud, Vanessa Redgrave, Michael York, Anthony Perkins, Richard Widmark as the murder victim, Albert Finney as the detective, and Ingrid Bergman in her third Oscar-winning role.

Branagh has sought to some extent to replicate that kind of star power with his casting of the remake. He’s cast himself in the lead role as Christie’s OCD Belgian detective Hercule Poirot, and put Johnny Depp in the role of the gangster-antiques dealer Edward Ratchett, Michelle Pfeiffer as Caroline Hubbard, a wealthy widow looking for her next husband, and Penelope Cruz as a holier-than-thou missionary named Pilar Estravados, essentially the part for which Bergman won the Academy Award in the original film. Star Wars heroine Daisy Ridley appears as the young governess Mary Debenham, and Willem Dafoe as a fascist Austrian professor Gerhard Hardman. Branagh, whose early success as a Shakespearean stage actor  cemented his career, has also tapped several products of the stage for parts in this film: Branagh’s oft-selected co-star Derek Jacobi plays Ratchett’s valet Edward Masterman; Josh Gad, whose first big success came with his Tony-nominated role of Elder Cunningham in The Book of Mormon, plays Ratchett’s personal assistant Hector MacQueen; and Leslie Odom, Jr., who won a Tony for playing Aaron Burr (“the damn fool that shot him”) in Hamilton, plays the congenial Dr. Arbuthnot, who seems to be having a clandestine affair with Miss Debenham. And then of course there is the grand dame of British stage and screen, Judi Dench, playing the aristocratic Russian princess Natalia Dragomiroff.

And the list goes on. This is one of the flaws in the film, actually. This great assembly of talent does little more than wait around on a snowbound train in the Balkans while Branagh as Poirot works on solving the crime, interviewing them one by one. Which makes every one of them woefully underused. Dench, Dafoe, Jacobi and Cruz are barely there at all. Gad gets a little more to do as the person most familiar with the victim’s nefarious business doings. Ridley and Odom have a little more screen time, partly because of their ongoing liaison, and partly because Poirot’s suspicions about them are aroused early. Pfeiffer stands out in her role, partly because she is playing a flamboyant woman who rather likes to be the center of attention, and partly because she turns into a kind of spokeswoman at the film’s climax.

Depp, of course, has to get killed off fairly quickly, and so he hasn’t got a lot of screen time either. What he has, though, he makes the most of. Wearing scars and talking like a thug from a ’30s gangster flick—homage to James Cagney in The Public Enemy (1931) or Paul Muni in Scarface (1932)—Depp as Ratchett sits down with Poirot and offers the detective a job. He wants someone to watch his back on the train, claiming to have received notes with death threats, and vaguely alluding to certain Italian gentlemen who are demanding restitution for counterfeit goods he has sold them. After Ratchett secretly pulls a gun on him, Poirot turns down the job. Ratchett wants to know if the gun put him off. Poirot replies in the negative, telling the gangster “I don’t like your face.” But of course, Ratchett turns up dead in his compartment, the victim of a dozen stab wounds.

This is the cue for the plot to kick into high gear. Or at least as high as it gets—it’s not terribly fast moving. But Poirot, the self-proclaimed “greatest detective in the world,” needs to solve the murder on this storied train as it makes its three-day journey from Istanbul to Calais. The fact that the train is delayed by an avalanche, keeping it precariously parked atop a tall trestle in the mountains, actually buys the detective some time. He soon discovers that Ratchett was not the gangster’s real name, and that in fact he had been involved in a notorious kidnapping and murder involving the baby of a famous aviator named Armstrong in 1932 (a thinly disguised appropriation of the Lindberg kidnapping, slightly fictionalized for purposes of the story), and that several of the suspects on the train have some connection to that case as well.

Considering the nature and subject matter of this film, it seems likely that it will be attracting an older audience than, say, Thor: Rgbarok. That older audience is more likely to have seen the earlier Lumet film, or even to have read Christie’s book, so many viewers will not be surprised by the solution to Poirot’s quest for the killer. There aren’t that many clues and it’s not that deep a mystery, to tell you the truth. Branagh the director does a number of things to spice up his filming of the story. He (with cinematographer Haris Zambarloukis)  uses overhead shots at some points—in the murdered man’s compartment, for example, when the body is found, we get an aerial view of the wounds in his chest. His camera also follows characters as they bob and weave hither and yon. Particularly memorable is a long one-take tracking shot (reminiscent of Emmanuel Lubezki’s similar virtuoso shots in Birdman and Gravity) in which Poirot enters and walks along the corridor of the moving train, during which he either passes or bumps into all of the main characters, including the victim and all the suspects. I should mention, too, some of the gorgeous vistas in the snow-covered mountains that we are treated to, none of which were really available for that 1974 film, especially since many of them are probably done on a green screen.

But the biggest innovation by Branagh and by screenwriter Michael Green (who also worked on this year’s Alien: Covenant and Blade Runner 2049) is in their handling of Poirot’s eccentric character. This is a man who sports an absurdly elaborate mustache that has the appearance of two squirrels tangling over an acorn in the middle of his face, and yet which is perfectly balanced on each side; a man who insists on perfectly cooked four-minute eggs for breakfast and won’t eat them unless they are precisely the same size; a man who can’t talk to anyone whose tie is not perfectly straight. This neurotic aversion to disorder, which has caused other actors to portray Poirot basically as a caricature, becomes for Branagh not an eccentricity but a curse. It has kept him from healthy relationships with others and made his daily life nothing but stress and anxiety, though this same rage for order has been invaluable in his ability to solve crimes. This is a Poirot seen through the lens of Tony Shaloub’s Monk. And the outcome of this particular case proves a huge challenge to Poirot’s creed, stated early in the film, “There is right and there is wrong.” He will be faced with a decision that pits his personal obsession against whatever humanity he has walled off inside himself.

Branagh clearly has great fun playing this character, and the film ends with what is essentially the promise of a sequel in a remake of Death on the Nile. There is much to like in this remake: Branagh’s portrayal, the cinematography, some memorable exchanges with Depp, with Pfeifer, and with Ridley and Odom. But there are also some flaws: the film is slow moving, the major stars are not allowed to do much beyond making an appearance. I’m giving it two Jacqueline Susanns and half a Tennnyson.