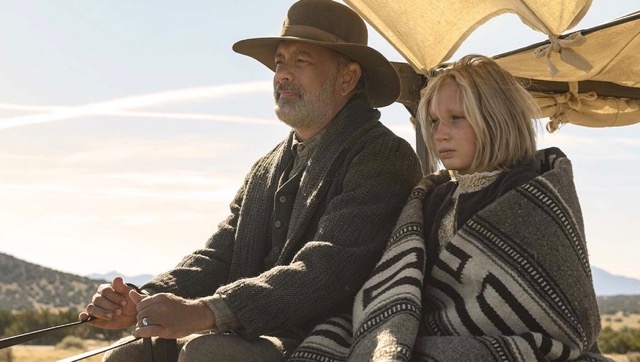 News of the World

Where to Watch: Streaming on Amazon Prime

She Said: Well, it’s happened: We’ve been home for the Pandemic long enough to get TWO Tom Hanks movies on streaming; the first was Greyhound, last year when streaming major studio releases felt very novel, and now we’ve got News of the World, when it feels more normal to fire up the Amazon movie machine and rent a movie at home for $20.

This film comes right out of the gate as a quest, a journey with risk and rewards in the service of a goal or value. Our hero, a former Confederate officer, Captain Jefferson Kyle Kidd, makes his living traveling from town to town in Texas in 1870 reading newspapers to the townsfolk. The evening is a kind of Chautauqua of the news, a performance of the headlines and human-interest stories that will engage and appeal to the audiences as well as edify. Kidd chooses topics beyond the main headlines to make the dime entry fee worth it for those who may not have much more than that to spare.

After the movie shows us what Kidd does, we find him traveling to his next “performance,” coming upon a lynched Black man, a crashed wagon and a lone little girl, unhurt but utterly alone. We quickly learn the little girl is Johanna Leonberger (German actress Helena Zengel), a child who was stolen from her German-immigrant family years before and raised by a Kiowa tribe in the area. With the settlers’ growing incursions of native lands, tensions are mounting and this little girl is being returned to her remaining family members (everyone else was brutally killed in the raid). The small blonde girl is dressed in Kiowa-style animal skins and speaks no English and very little German, as she has almost no memory of her birth family. She is hard to handle, resists the dress she’s put in as soon as Kidd gets her to a town, and insists on eating with her fingers, but she’s smart enough to know who she’s safe with and who she isn’t, and like the rest of America during a pandemic, she knows she’s safe with Tom Hanks. We know his near-term, quick solution isn’t going to work out, as we have a two-hour movie to go, and our quest takes shape in this particular time and place.

And so, we have our reluctant hero Captain Kidd, setting off to take the girl somewhere safe, while also healing his own wounds. Whilst predictable in the ways this storyline may be for those who’ve encountered this plot in literature and movies many times before, this movie is anything but cookie-cutter, insincere or heavy handed. For starters, Johanna’s plight given her trauma of the slaughter of her family, and then her removal from the people she considers her beloved family, the Kiowa, is profoundly pitiable, and Zengel plays it strong and straight, so that our emotions are our own, not demanded by the film. Hanks plays a role we know and love him for, the ethical, but flawed, man, doing his best to do his best. And while the structure and scenario are straightforward, my emotions ran a sizeable gamut because of the understated, honest portrayal of these characters. The movie loved them, and so did I. The white people are good and bad; the Kiowa are good and bad; the world is a dangerous place, making kindness matter all the more.

I’m not a big lover of westerns; there’s often a machismo and an ethic of violence I don’t relate to, but westerns are almost always good for one thing: beautiful scenery, and Greengrass makes the most of these opportunities. Texas looks real pretty, y’all, as well as austere and indifferent to the plight of a little Kiowa-raised German girl with nowhere to go.

My only quibble is the title. The movie is based on the novel of the same name, which I haven’t read, but I kept forgetting what this was called because the phrase doesn’t really attach itself to the meaning of the film as I experienced it. Yes, Kidd’s job is reading that news to people as his job, but it doesn’t connect as cleanly on screen to the central relationship of the film, the Captain and Johanna. What say you, Ruud?

He Said: Well, as a title, “The Captain and Johanna” sounds more like a ’90s pop duo than a movie, though you might say that love does keep them together in the end. Is that a spoiler? But I think “News of the World” is not a bad title, since it works on two levels—the literal level of Brother Kidd’s Traveling Show and the more suggestive level of how the news he brings from the outside world to some of these small towns (especially one town whose despotic leader forbids any news other than his own propaganda) enlightens people’s minds and changes their lives, as he changes Johanna’s.

But going back to your point about not liking westerns, it’s interesting that this is Hanks’ first ever western, which at this stage of his long and varied career is hard to believe. Maybe he felt the same about them as you, but was talked into this by directorPaul Greengrass, who directed him in the intense Captain Phillips. But as a connoisseur of westerns myself, I couldn’t help seeing echoes of previous classic westerns in scene after scene of this film. There’s a True Grit vibe in Hanks’ road trip with the young girl. There’s a whiff of Red River as they make their way into a Texas town where the streets are crowded by a huge cattle herd. There’s a hint of Butch Cassidy and the Sundance Kid in a gunfight in the mountains. And most of all there is the shadow of the John Ford classic The Searchers looming over the film, as Hanks searches for the girl’s lost family and tries to return her from her Kiowa captivity—the reverse of John Wayne’s search for his niece who has been taken captive by Indians. A camera shot from inside a deserted cabin looking through the front door out at Kidd and Johanna seems a deliberate echo of the final shot of The Searchers, that framed Wayne in the doorway, standing isolated outside the girl’s home. The film is a kind of taking back of The Searchers and of the conventional western’s glorification of violence, particularly violence against Indians.

But let me ask you this, Jones: Greengrass is best known for frenetic action movies, like the Bourne trilogy. In News of the World, we have a very episodic, fairly slow-moving story—intense at times, yes, but generally unhurried. Is it too ponderous?

She Said: One viewer’s ponderous might be another’s careful and intentional consideration of the ways in which we are invisibly scarred by the traumas the world and its politics can inflict upon adult and child alike. This movie thoughtfully and lovingly earns four Hitchcocks in my book because it could not be better at what it’s good for.

He Said: The movie is generally good at what it’s good for. The plot, though, is a bit cliché and definitely episodic, and its careful intentionality might not be what viewers are expecting from a Greengrass movie. The cinematography as you mentioned is noteworthy, and kudos to cinematographer Dariusz Wolski for those great vistas of New Mexico disguised to look like Texas. Hanks is flawless in the sincere humanitarianism he brings to the role, and the young girl, film newcomer Zengel, does a bang-up job with very few lines in English. I’m gonna go ahead and give this film three Soderberghs. It’s definitely worth a watch.

This Week’s We Watched It so You Don’t Have To:
He Said: Wonder Woman 1984

Hot Take: The new Wonder Woman that premiered on Christmas has the saving grace of retaining the glorious Gal Gadot in the title role, but has the misfortune of trying to be equal to one of the best superhero films ever made. It really doesn’t rise to the challenge and has a messy story that goes on for two and a half hours without really going anywhere.