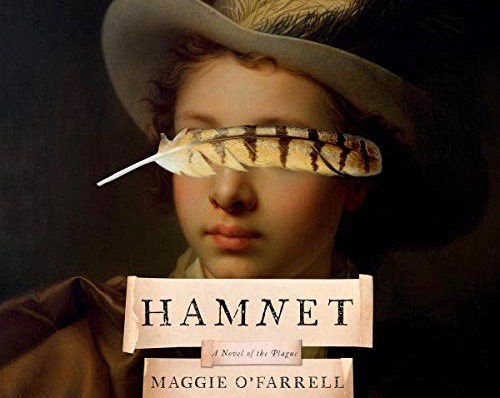 There is at the center of Maggie O’Farrell’s novel about the death of William Shakespeare’s 11-year-old son Hamnet a chapter that backs away from the story we are in the midst of and examines it from a transcendent perspective. It is unlikely that O’Farrell could have conceived at the time of its composition how terribly relevant and contemporary that chapter would prove to be by the end of the year in which her novel was published. In O’Farrell’s fiction, Hamnet dies of bubonic plague—a plausible fiction in an age when the theaters of London were periodically closed for months due to outbreaks of the plague in the city. O’Farrell begins this remarkable chapter by explaining

“For the pestilence to reach Warwickshire, England, in the summer of 1596, two events need to occur in the lives of two separate people, and then these people need to meet.

“The first is a glassmaker on the island of Murano in the principality of Venice; the second is a cabin boy on a merchant ship sailing for Alexandria on an unseasonably warm morning with an easterly wind.”

As O’Farrell goes on to intricately explain how the cabin boy, playing with a monkey in Egypt, becomes a carrier for a flea, who spreads the deadly virus through its progeny to shipboard cats and rats, to members of the ship’s crew, to the glassmaker in Venice, into a box of glass beads that is ultimately shipped to England and brought to Stratford and delivered to a seamstress for use on a gown—and which Hamnet’s twin sister Judith unpacks. In light of the current COVID-19 pandemic, the description has a chilling immediacy, and is likely to be the most memorable part of the novel for current readers.

This seems inevitable but does the novel a disservice. What O’Farrell has really given us is an extremely well-researched historical novel concerning the death of Shakespeare’s son that stands as a timeless exploration of parental grief at the unthinkable loss of a child.

We really don’t know a great deal about Shakespeare’s life. There are far fewer surviving records of his life than there are, for example, of Chaucer’s, who lived 200 years earlier. Of Shakespeare’s private life, his family life in Stratford, we know few facts. We do not know what his relationship was like with his parents. We don’t know exactly why he left Stratford to make his way in London, or how often he returned home. We don’t know exactly how Hamnet died, or how the boy’s death affected his father—only that Shakespeare wrote some of his most lighthearted comedies in the immediate wake of that. We do not know anything about his relationship with his wife, other than that she was eight years his senior and he married her when she got pregnant. All we know is that, in his will, he left his wife his “second best bed.” This latter detail has raised a number of conjectures as to what it meant about their relationship. O’Farrell actually deals with this briefly in her book: When he purchases a new bed, she simply declares she likes the old bed better, and wants to sleep in it. And that’s all there was to that.

It’s the playwright’s shadowy wife, in fact, who emerges as the novel’s protagonist, not Shakespeare himself or his eponymous son. But it is Hamnet whom we meet first, as the book opens with the lad frantically searching for his mother, his grandmother, his older sister, anyone that might be able to help him, as his twin sister Judith has suddenly and alarmingly taken ill with what turns out to be the bubonic plague.

At this particular moment, the mother is away from her own home, on her brother’s farm, where she is tending to some bees she keeps there. She is unaware of the fate that is about to come down on her, and the narrator says “Every life has its kernel, its hub, its epicenter, from which everything flows out, to which everything returns. This moment is the absent mother’s.” Indeed, it will seem as if everything in her past life has brought her and her family to this moment, and everything will be quite different from this moment on.

The woman we know as Ann Hathaway is here named Agnes, which is how her father named her in his will. Agnes’s story is told in two timelines: It begins here at this moment of crisis, and alternates between this narrative “present” and a past beginning 15 years earlier with her first meeting with the Latin tutor whom she will eventually marry. Variously referred to as “the tutor,” “her husband,” “the boy’s father,” the novel’s most famous character is never named. And since next to nothing is known about the tutor’s wife, O’Farrell takes this as a license to create the character of Agnes from the ground up, weaving a woman far more sympathetic than the often negative portrayals of Shakespeare’s wife have been hitherto.

In O’Farrell’s reimagining, Agnes is a free-spirited, wild creature, more at home in the woods than indoors. She is a healer to whom the folk of Stratford come to for healing potions when they are sick, but are a bit in awe of.

“She has a certain notoriety in these parts. It is said that she is strange, touched, peculiar, perhaps mad…collecting plants to make dubious potions. It is wise not to cross her for people say she learnt her crafts from an old crone…She is said to be too wild for any man. Her mother, God rest her soul, had been a gypsy or a sorceress or a forest sprite.”

When Shakespeare, employed as a Latin tutor for her half-brothers, first sees Agnes out of a schoolroom window, she is emerging form the forest with a hawk on her wrist, and he thinks she is a boy. But before long, the 18-year-old tutor is enamored of the 26-year-old wood nymph, and gushes to his sister that she is “like no one you have ever met…She can look at a person and see right into their very soul.” The young Shakespeare, something of a misfit in his own home with a domineering father in whose glove-making business the boy has no talent or interest, is eager for something finer. And for her part, Agnes, stuck in a Cinderella situation, fatherless with an obnoxious stepmother, is eager to consummate her love for this fellow pariah.

Three children later, Agnes, recognizing her husband’s restlessness and dissatisfaction with life in Stratford, sends him off to London, where he unexpectedly becomes a success in the theater. Young Judith’s frail health makes it untenable for the family to follow him, so that he is only able to visit occasionally. So the father is in London when the family crisis of Judith’s illness strikes. Summoned from London, he rushes back to Stratford thinking to see his daughter dead—and instead finds his son, who has employed a favorite twins’ trick—“to exchange places and clothes, leading people to believe that each was the other”—to trick Death into taking him instead of his sister. It’s a trick worthy of one of Shakespeare’s own dramatic twins, but a tragic one.

The real tragedy is Agnes’s. The emotions of the healer, devastated by her son’s loss, which came as an unlooked for shock while she tried to save her daughter, are presented in as raw and unflinching a depiction of grief as you will ever read. O’Farrell, who in her 2018 memoir I Am, I Am, I Amdescribes her own child’s near death, channels her private emotions in writing Agnes, and makes us feel in fiction what no parent should feel in reality. The scene in which Agnes lays out her son’s body for burial is one of the most exquisitely painful you will ever read.

As so often in real life, the loss of the child creates a great strain on the marriage. Harvard scholar Steven Greenblatt has asserted that “Hamnet and Hamlet are in fact the same name, entirely interchangeable in Stratford records” (hence the italicized nin the book’s title), and has proposed the possibilitythat Shakespeare’s grief at his son’s death was the motivation in his creation of Hamlet. It’snot a suggestion that other Shakespearean scholars have generally accepted, but it makes for an excellent fictional development, and Agnes’s bitter reaction to this step beings the denouement of the novel.

This is a brilliant historical novel, both because of O’Farrell’s detailed recreation of 16th century domestic life, and her depiction of the universality of grief. You ought to read this book.