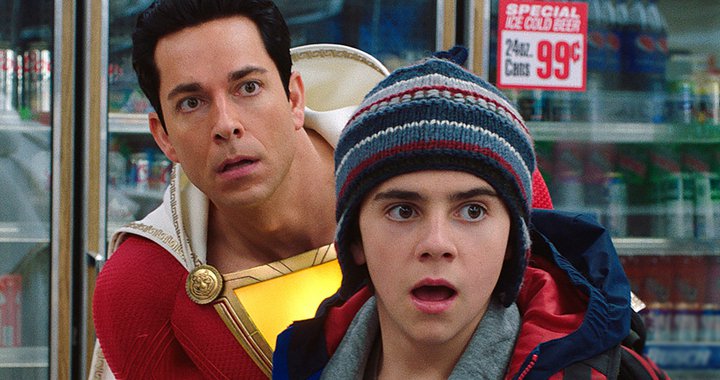 Think Penny Marshal’s Big meets a PG-rated Deadpool. That’s basically what you get in the comic but not-so-sardonic-as-Deadpoolnew film from the DC expanded universe, directed by David F. Sandberg (Lights Out) and written by Henry Gayden (Earth to Echo), in which a teenager magically transforms himself into an adult body while remaining an adolescent in his mind—with the additional twist that the adult he transforms himself into is, by the way, a superhero. And just in case you missed the connection to Marshall’s 1988 Tom Hanks vehicle, there’s a wink at that film’s most famous scene in a brief shot midway through the film as the main character runs through a toy store.

But this movie’s connection with ’80s movies goes deeper than its blatant variation on the theme of Big. The film does more than focus on a particular lone and tormented crimefighter, a la DC’s caped and gloomy crusader Batman. In fact it bears little resemblance at all to the plethora of ultra-dark super-serious save-the-universe-from-Armageddon superhero flicks that have become the rule (which we’ll see enough of in a couple of weeks with Marvell’s Avengers: Endgame). Instead, this film focuses on the importance of family and of relationships, and on a group of teenagers teamed up to solve a problem. The tone is a real throwback to Spielbergesque ’80s films like Goonies or Back to the Future.

There is another sense in which the character of Shazam could be described as a cross between Superman and Captain Marvell. It’s well known that when Superman burst upon the scene in 1938, he revolutionized the comic book genre. Everybody wanted their own superhero to compete with the Man of Steel. Superman’s most successful competitor first appeared in issue #2 of Fawcett Comics’ “Whiz Comics” in 1939: a character named—wait for it—Captain Marvel. But hold on, this Captain Marvel was a 12-year-old newsboy named Billy Batson who was able to morph into an adult sized superhero by calling out a single word: Shazam!

This Captain Marvel went on to actually sell more comics than Superman himself until Superman’s parent company, then called National Comics, sued Fawcett, claiming that Captain Marvel was just a plagiarized version of Superman. Of course, there was some truth in this, but the stealing did go both ways: Superman, for instance, could never fly until Captain Marvel revealed that particular power in the early 1940s. And for that matter, Superman’s bald-headed arch-nemesis and super-villain Lex Luthor pretty clearly owed something to Dr. Thaddeus Sivana, the original Captain Marvel’s bald-headed arch nemesis and super-villain. The suit went on for more than a dozen years, but National finally won its case in the early 1950s, and won the rights to the character of Captain Marvel. It wasn’t until the early ’70s that National, now DC Comics, decided to reintroduce the character in their own line—but by then another rival company had introduced its own character with the name Captain Marvel, and had actually named their entire line after that hero. So DC had to simply call the recycled character Shazam. And now, more than 45 years later, we have the irony of two movies both concerning different characters originally named “Captain Marvel,” appearing within two weeks of each other. As Gomer Pyle would have said, “Shazam!”

In this film version, we first go back in time more than four decades to encounter a boy, belittled and verbally abused by his father and older brother, who, in what might be simply an imagined escape, finds himself in a cavernous room lined with monstrous statues of the seven deadly sins, and confronted by an aged wizard (Djimon Hounsou, last seen two weeks ago in Captain Marvel)  The wizard is looking for someone pure of heart to whom he can pass on his magic powers, which he uses to keep the seven sins at bay. The boy fails the test, but the wizard vows to keep looking.

Flash forward to the present, and we meet 14-year old runaway Billy Batson (Asher Angel of TV’s Andi Mack). Billy seems an unlikely candidate for the “pure of heart” label: Abandoned as a youngster, he has spent some ten years bouncing from one Philadelphia foster home to another, all the time trying to find his real mother. But Billy’s latest brush with the law lands him in a foster home with caring foster parents (Marta Milans of TV’s The Pier and Cooper Andrews from TV’s The Walking Dead) and a winning group of foster siblings (including Faithe Herman, Ian Chen, Grace Fulton and Jovan Armand) whom he mostly ignores at first. But ultimately Billy forms a grudging bond with his younger roommate Freddie Freeman (Jack Dylan Grazer from Beautiful Boy), who has a walking disability, a warped sense of humor and an obsession with superheroes. In other words, Freddie is the personification of the core intended audience for the film and, like a Greek chorus, responds in ways the audience is meant to.

When Billy, like his unnamed predecessor, is brought to the secret magic room with its by now desperately debilitated wizard, the wizard has to pretty much take it on faith that he’s got somebody who can carry on his protective crusade, since Billy seems like his only hope. And with one word, Billy turns into the ripped adult superhero Shazam (Zachary Levi from TV’s Chuck). But the thing is, he’s still a 14-year-old adolescent in a 30-year-old superhero body, so he acts pretty immature for a superhero—something Freddie is the first to call him on. What follows the transformation is the most entertaining part of the movie, as Freddie, with his checklist, runs grownup Billy through a series of tests, trying to figure out precisely what his powers are. Super strength? Check. Bullet proof? Check. Laser vision? Not so much. Flying? Well, maybe, but it’s something we need to work on. Taking a cue from the actual history of the disputed character, Freddie and Billy also try to come up with a name for the new superhero, and some of these are pretty crazy: My personal favorite is “Captain Sparklefingers.”

The film takes a darker turn when Billy/Shazam is faced with the aforementioned super-villain Dr. Sivana (played with Bond-villainesque menace by working actor Mark Strong, who previously played another DC supervillain, Sinestro, in the eminently forgettable Green Lantern). Sivana, fueled by the embodiments of those dreaded seven deadly sins, has powers equal to Shazam’s own, and can only be defeated by an unlooked for stroke on Billy’s part that gives the film a more uplifting ending than most superhero flicks.

The film is highly entertaining, with Glazer and Levi forming a very watchable comic buddy team. Its light touch and boyish charm are refreshing in the morass of heavy-themed superhero movies. Like most of these kinds of films, it does have a severely overlong CGI-enhanced battle scene at the end (Why do they do this every time?) that will give you sufficient nap-time if you need it, but don’t sleep through all of it or you’ll miss Billy’s clever twist. All things considered, this is a superhero movie that you might very well like even if you don’t like superhero movies. Three Tennysons for this one.