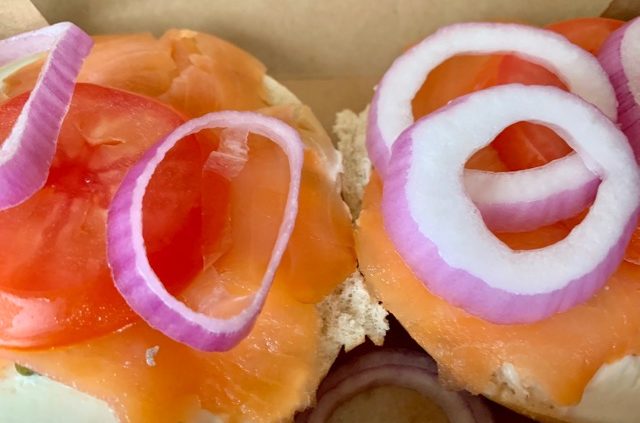 He Said: She Said had been craving bagels since she listened to a podcast about them recently, so this was an important visit. It’s not as if Conway is swimming in bagel shops the way it is in Mexican restaurants and pizza joints. In fact, unless I’m missing something somewhere, Einstein Bros. is the only bagel shop in the city, though apparently they are becoming all the rage in larger cities. While Einstein’s is not going to supplant any specialty places on the east coast, it’s what we’ve got here so She Said and I took it on for this week.

The company was born in Golden, Colorado in 1995, and originally combined several smaller chains that were all selling in cities that did not have a strong bagel history. In 2014, the company was acquired by the German holding company, JAB. (This is a company that admitted two weeks ago that its founders had been Nazi supporters and had utilized forced labor in 1943, something they regretted and pledged $11 million to charity as a kind of self-imposed penance. While that doesn’t really affect a company that was in existence long before they acquired it in 2014, it’s still a bit ironic that they should own a bagel franchise).

Currently, Einstein Bros. has more than 700 locations in 43 states and the District of Columbia.

She Said: Yes, dear readers, I’m addicted to the Gastropod podcast, which explores food through the lens of science and history, and the hosts recently took on bagels. After just 5 minutes of listening to them on the morning dog walk, my mouth was watering, and I was all about applying some bagels to my face.

He Said:It’s modern, clean and shiny in this Donaghey Hall location, though it’s pretty Spartan inside, with no frills and few tables. It’s kind of like they don’t want you to actually eat there, but would prefer that you take the food away.

She Said: For this visit, He Said picked up the food after his art history class. I have been there before for lunch when I was teaching writing at UCA. It’s not incredibly comfortable or relaxing. It’s really for take-away.

He Said: We did not order drinks, since we were taking the hint and bringing the food home. They did have Coke products, though, plus Caribou Coffee products, if you do want to top off your fluid levels.

She Said: I do have a nostalgic attachment to Caribou Coffee after living in the Twin Cities in Minnesota, where they are almost as ubiquitous as Starbucks, but I drank my own drinks at home.

He Said:They have a wide variety of bagels and toppings, as well as good looking breakfast egg sandwiches, deli sandwiches, signature sandwiches, and hot sandwiches, on a choice of ten different varieties of bagels. You can also get muffins or cookies or other things to add to your meal. We were just having sandwiches, and I ordered the “Tasty Turkey” from their “Signature Sandwiches” list. This is, as their menu describes it, is a sandwich made up of “roasted turkey, spinach, cucumber, lettuce, tomato with onion and chive schmear on an asiago bagel.” This little number has only 500 calories, and so is one of the lighter sandwiches on the menu. It does have 15 grams of fat, likely mostly from the cream cheese, and, well, the bagel, but that is acceptable for my low-fat diet.

This signature sandwich was quite tasty. The cucumbers were a kind of surprising treat in the midst of the turkey, onion and cream cheese flavors. And the asiago bagel was dense, chewy and cheesy. This is a nice alternative to a Subway or Quizno’s sandwich shop, and feels more substantial than a typical sandwich.

She Said: I’m a bagel traditionalist, and I love plain bagel with lox and a schmear very, very much, so I ordered the Nova Lox and Bagel Sandwich, which is a plain bagel, cream cheese, red onion and smoked salmon. If you are tracking macro-nutrients, this sandwich delivers 63 grams of carbs, 21 grams of fat and 26 grams of protein, which is about perfect, macro-ratio-wise. (There were tomato slices, but I gave them to He Said.) While I know there are empirically better bagels out there in the world, boiled and baked for the perfect consistency, these are our only nongrocery option in Conway. And, it answered my craving satisfactorily. It was filling (at 460 calories), tasty with pleasantly mixed textures. I will definitely order this sandwich again.

He Said:The young fellow at the window was friendly and courteous, and though he didn’t immediately know what the ingredients for the Tasty Turkey sandwich were (he may have been relatively new), he found out right away without losing his good humor.

She Said: He Said brought the bagels home, and he’s cute and friendly and brings me food, so my service on this order was amazing!

Elapsed Time from Our Arrival to Food Arrival:7 minutes.

He Said:I would come back here again. The bagels are tasty and a nice change from more common sliced bread. The prices did seem a bit on the steep side, though

She Said: This bagels and lox with a schmear is on my list of Conway delights that satisfy cravings.

Is Einstein Bros. Good At What It’s Good For? It’s good enough if you like bagel sandwiches.