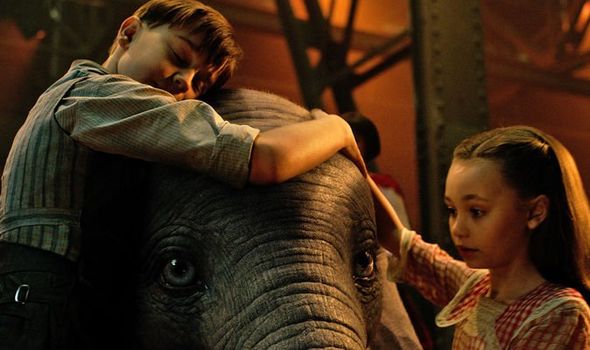 One of the most vivid memories of my life is the first time I saw a family of elephants in the wild in Zambia. I was on a river cruise on the Great Zambezi and saw three elephants—a large male, a smaller female, and a small baby elephant—emerge from the surrounding jungle to enjoy a cool drink at sunset from the mighty river. Seeing the great beasts free in their natural habitat, obviously a content and loving family unit, made my heart swell with awe and wonder. Lest you think I’m anthropomorphizing the animals by calling them a loving family unit, I would draw your attention to recent research that shows that elephants not only feel empathy but also mourn their own dead. The largest of all land animals, elephants have much larger brains than any other land animals, and have three times more neurons in their brains than do human beings.

Thus the portrayal of filial love between a mother elephant and her baby, as depicted in Tim Burton’s latest film from Disney, the live-action Dumbo, is not simply the recreation of the same relationship in the original animated film. It is also a reflection of reality.

In the original film, as in many animated films, Disneyesque or otherwise, talking animals are essentially figurative representations of human beings, speaking through animals for comic and sometimes satiric, even didactic, purposes. Dumbo and his mother are reflecting human values and attitudes, so there are gossiping lady elephants and helpful cheerleading mice, as well as jesting, scornful crows, but it’s all a kind of allegory to convince us we should accept those who might be different—who might, for example, be born with gigantic ears. In Burton’s new film, however, all the speaking parts are given to humans, and Dumbo and his mom are reduced to secondary roles as animals in which the humans have an interest. As such, the film becomes in part a moral fable about the treatment of animals, in particular animals as intelligent and empathetic as elephants, and a caution against the exploitation and abuse of such magnificent creatures.

And that is the most impressive and successful aspect of the new Dumboremake. It’s really difficult to find a legitimately artistic reason for this recent remaking trend—one might even say “epidemic,” noting that two more such remakes (of Aladdin and The Lion King) are due to come out in the next two months. None of the live-action remakes (Cinderella, Alice in Wonderland, The Jungle Book, Beauty and the Beast) has been anything more than a pale and limpid imitation of the original animated classics. One is forced to conclude that Disney’s only motive in this program is greed. Let’s see how many seats we can fill with this new recycled crap. And it does seem to be working: In its opening weekend just past, the newly dusted off Dumbo, despite less-than-glowing reviews from critics and theatergoers alike, took in $46 million domestically, easily topping the weekend box office over previous champions Us and Captain Marvel. While it seems unlikely to maintain that position with the new Shazam coming out this weekend, it’s still a decent showing, though one that’s not likely to justify the $170 million price tag for the picture’s production.

Still, one could argue that if any Disney classic animated film could use a remake, it wasDumbo. At only 64 minutes, Dumbo was the shortest of Disney’s classics, and could certainly use some fleshing out of its story. More importantly, Dumbo was never going to get rereleased in its original form, or to get much airplay on TV, because of the blatantly racist portrayal of the minstrel-like crow band—you might as well call them the “Jim Crow” band—who sing the movie’s biggest song, “When I See an Elephant Fly.” They might as well be wearing blackface. Cutting this number was necessary in the remake, though unfortunately the song itself has some hilarious lyrics: “Well, I’ve seen a horse fly. And I’ve seen a dragon fly. I’ve even seen a house fly. But I ‘be done seen about everything’ [see what I mean about the blackface?] when I see an elephant fly.” Burton can’t use the song in its original form, but he can’t stand to lose the lyrics, so he gives them to his circus MC in spoken form. Unfortunately, it doesn’t really work that well.

Nor does the film as a whole. The screenplay, by Ehren Kruger (whose previous efforts include The Brothers Grimm and three Transformers movies), takes the general outline of the original film and uses it as a framework for a wholly human story of family togetherness, greed and acceptance of differences—themes that are to some extent drawn from the original. But there’s a workmanlike quality to this that makes it seem far less magical than a flying elephant ought to be. The story begins exactly a century ago, in the “Medici Brothers’ Circus” as they begin their 1919 season. Former trick rider and circus star Holt Farrier (a subdued Colin Farrell) returns from service in World War I missing his left arm, and is reunited with his children Milly and Joe (played by newcomers Nico Parker and Finley Hobbins). The children’s mother, Holt’s partner and wife, has died (along with a number of other circus performers) in the flu epidemic and Holt learns that his horses have since been sold by circus owner Max Medici (Danny DeVito, veteran of several Burton films including Batman Returns) to help make ends meet for the struggling troupe. With no wife and no more act, but a pair of kids to support, Holt stays with the circus to work as the elephant tender. And one of those elephants is pregnant: Imagine everyone’s surprise when she gives birth to a CGI baby with cute eyes and giant ears. Poor Dumbo becomes a laughingstock and Max sells his Mom down the river, so of course the two kids bond with the poor motherless pachyderm: Who can understand him better than they do?

And it’s the kids, of course, who essentially teach, or at least encourage, Dumbo to fly, and it’s the kids to whom the adults don’t listen when they are being presented with the act that’s going to solve all their problems. Ultimately, though, Dumbo soars around the Big Top and the Medici Circus is on its way to fame and fortune. Enter entertainment entrepreneur V.A. Vandevere (Michael Keaton, a veteran of Burton’s Beetlejuice and Batman movies), who merges with Max’s circus in order to make Dumbo the star attraction of his gigantic theme park

It doesn’t take a lot of imagination to figure out the direction this film is heading. And that’s quite a surprise in a Tim Burton film. Burton here seems to put all his creative energy into biting the hand that is feeding him: Isn’t there something a little bit strange about this giant theme park Dreamland, which is trying to cash in on the poor little elephant’s talent? The fact that this film about an entertainment giant merging with a smaller company in order to exploit its potential—especially in a film released (coincidentally) just a week after Disney finalized its merger with Fox—is nothing if not a curious turn for the movie to take.

So perhaps that’s what Burton was focusing his creativity on; it certainly wasn’t the film’s main story. He seems to have hired actors he was familiar with so that he wouldn’t have to direct them much. DeVito is unusually sympathetic as Max, and Keaton is over the top in an almost Beetlejuice manner as the film’s heavy. Arkin is the crotchety Arkin, and Green is very watchable. Farrell doesn’t seem to have his full heart in it here, and as for the kids…. Well, I don’t want to be accused of churlishness by attacking these poor children, but good lord! I assume that little Ms. Parker was hired because she is photogenic, but somebody needed to tell her that she ought to show an occasional emotion, and that she should deliver lines as if they meant something and were not simply shopping lists. And that somebody should have been her director. Young Master Hobbins is a bit better, but only by comparison. And these kids’ roles are crucial to the film.

In the end, Dumbo has a few interesting points, and it looks good, but it turns out there’s no there there. The elephant is just too heavy to lift off. Two Jacqueline Susanns for this one.