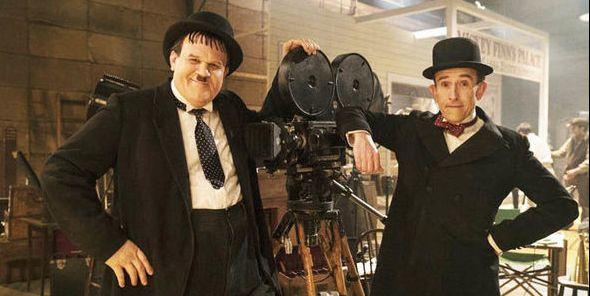 Before Tina Fey and Amy Poehler, before Martin and Lewis, before Abbott and Costello, before Hope and Crosby, there was Stan Laurel and Oliver Hardy, the quintessential comic duo who influenced every one of those later pairs with their combination of physical and verbal humor, their trademark characters, their bowler hats and silly dances. From Samuel Beckett to Monty Python to Kurt Vonnegut, Laurel and Hardy’s fingerprints are all over twentieth-century humor. Stan Laurel, an Englishman (born Arthur Stanley Jefferson) who started out in Vaudeville as Charlie Chaplin’s understudy, found a home in Hollywood and had appeared in some 50 films, while also writing and directing, before being teamed up with Oliver Hardy (born Norvell Hardy in Harlem, Georgia). “Babe” Hardy, as his friends called him, had already appeared in 250 silent shorts before producer Hal Roach, to whom they were both under contract (separately), decided to put the two of them together in the silent short Putting Pants on Philip in 1927. And the rest is history.

The relatively small and thin Stan adopted the character of an ineffectual blundering optimist in a bowler hat with a bowtie and loose-fitting coat, playing against Oliver’s large, heavy, overconfident blowhard with a toothbrush mustache, wearing a bowler of his own, a necktie he could flap about, and a too-small suitcoat. As these characters, the duo made 32 short silent films, 40 short sound films, and 23 full-length feature films, including the classics Babes in Toyland, Sons of the Desert, Way Out West, and The Flying Deuces.

One of the best movies of this year (by which I mean 2018, since it has taken so long for the film to reach central Arkansas, where you can see it only at Riverdale 10) is a loving and gentle tribute to the beloved film duo, a little British film called Stan & Ollie. From director Jon S. Baird (known chiefly for TV series like Babylon), and written for the screen by Jeff Pope (Oscar-nominated for his screenplay of Philomena), the film is an engaging bro-mance featuring intelligent, subtle and brilliant performances by John C. Reilly as Ollie (which earned him a Golden Globe nomination for best actor in a musical or comedy) and Steve Coogan, Pope’s co-writer on Philomena, as Stan (for which he has been nominated for a BAFTA award for best actor). While the film is also nominated for “Outstanding British Film of the Year” by BAFTA, it was strangely ignored in this year’s Oscar nominations, though it is a far better film than most of those nominated.

The film begins with a kind of prelude set in 1937, at the height of the duo’s popularity, with a scene in which we follow the two stars across a movie lot in a long sustained shot as they discuss their unfortunate love lives and then talk about renegotiating their contracts, something Stan is eager to do while Ollie doesn’t want to rock the boat. The two are the toast of Hollywood, and their salaries should reflect that, Stan insists, adding that they also should have control of their own pictures, as Chaplin does. When they reach the set of their current project, Stan makes his views known to Hal Roach (an appropriately slimy Danny Huston from Wonder Woman) while Ollie tries to put oil on the waters, and the discussion is tabled as the boys begin a hilarious dance number on the set of their comic western Way Out West.

Cut to sixteen years later. Now past their prime, the pair are struggling to reconnect with fans who believe they have been long retired, and engaged in an uphill battle against the new medium of television and a new taste in movie comedy underscored by a giant billboard for a new Abbot and Costello comedy that appears behind them in one scene. Stan and Ollie have signed on with a shyster producer named Bernard Delfont (Rufus Jones of TV’s WIA), who has arranged a string of live performances across Great Britain and Ireland. Ollie believes they are doing this to raise money and awareness for a new film project—a spoof of Robin Hood that Stan has been working on and trying to sell to a London producer. We see the two of them in cramped, second-rate hotels, booked into small theater venues and attracting tiny but appreciative audiences. At the same time, we watch their friendship, strained and teetering under myriad small, unspoken betrayals over the years, waiting to burst apart. Ollie’s failure to support Stan in contract negotiations and his seeking a better deal at another studio, his working with another partner after Stan’s desertion, not to mention little allusions to problems with alcoholism all come out and seem to have contributed to the partners’ fall from popularity.

The crowds, and the hotels, gradually improve after numerous Delfont-directed publicity stunts by which Stand and Ollie draw attention to their tour, so that by the time they reach their climactic gig in London they appear to be on the brink of a real comeback. They have also invited their wives to meet them in London: Lucille Hardy (Shirley Henderson of TVs HappyValley) and Ida Kitaeva Laurel (Nina Ariana of Florence Foster Jenkins) arrive and, with their own verbal sparring, cause some of the onlookers to comment that they’ve gotten two double acts for the price of one. What Stan hasn’t told Ollie in all this time, however, is that the Robin Hood film has been rejected by the London studio, and will not be happening.

The climax of the film comes at a party thrown in London to welcome and honor the boys, a party at which the cracks in their complicated relationship finally burst apart. Stan complains about Ollie’s laziness and willingness to be taken advantage of rather than make any waves, while Ollie comes back and, more bitterly, accuses Stan of being a hollow person with no real affection for anyone. When Stan throws food at Ollie’s head as he storms out, the party guests applaud, thinking it was all part of the act.

It’s a lovers’ quarrel, of course, and one that, given the nature of the film as a somewhat sentimental and bittersweet romantic comedy, you will certainly hope will be transcended as the film moves toward its conclusion, which I will not, of course, reveal. The performances carry this film. Both Coogan and Reilly portray the individual comic icons with a light touch, suggesting Laurel’s driven anxiety and Hardy’s relaxed ease without falling into caricature of the duo’s famous personae. Huston and Jones are sufficiently unlikeable in their roles as the heavies of the film, and Henderson and Ariana are memorable in relatively small roles—Ariana in particular stands out as Laurel’s Russian wife, virtually stealing every scene she is in. It’s interesting, as well, watching Mrs. Hardy’s uptight demeanor as contrasted with Mrs. Laurel’s blunt nonchalance: It’s almost as if, in their spouses, each of the men has matched himself with a woman who embodied major traits of his acting partner.

The film is ultimately a nostalgic blast for fans of Laurel and Hardy, and a loving introduction to their work for those too young to remember them. Some may find this quiet film disappointing, the comic bits lacking the brashness or outrageousness expected in contemporary comedies. Some may find the final act of the film too sentimental for their tastes, real as it may be. I did not find it so, on either count. When I complain about current films, my wife will often remind me “You’re not the intended audience.” And she is always right. In this case, I guess I was the intended audience. In any case, I’m going to go so far as to give this film four Shakespeares. Try and stop me! If you think you might like this film, you are already part of the intended audience too. So you ought to go and see it.