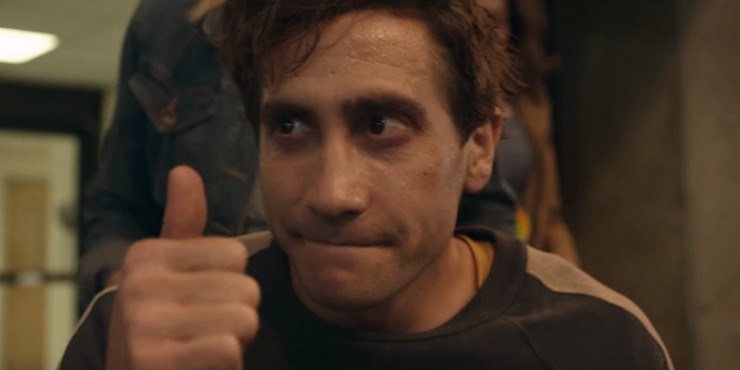 Well, you won’t find this movie in Conway, and you’ll have to look pretty closely to find it anywhere in central Arkansas, I suppose because movie houses around here were committed for reasons known only to them to provide as many screens as possible for the less-than-favorably reviewed Kingsman 2 and The Lego Ninjango Movie and the abysmally reviewed Friend Request, so they didn’t have room for Stronger, which has a 95 percent positive rating on RottenTomatoes.com. But at least Stronger found one screen in central Arkansas, at Colonel Glenn 18. That was more than the 86 percent positive Battle of the Sexes got. To see that I guess you have to move to Chicago, which seems to be the closest place it’s playing. Oh well, maybe next week.

The “official” description of Stronger on its IMDB page calls it “the inspiring real-life story of Jeff Bauman, an ordinary man who captured the hearts of his city and the world to become a symbol of hope following the infamous 2013 Boston Marathon bombing.” Thank God that’s not what it is. Yes, the basic story outline is reminiscent of Lieutenant Dan in Forrest Gump, and to some extent Ron Kovic in Born on the Fourth of July, so it may seem like you’ve seen this before. But director David Gordon Green (Our Brand Is Crisis) and first time screenwriter John Pollono (whose script was based on Bauman’s own autobiography, co-written with Bret Witter) are committed to giving a warts-and-all picture of Bauman’s character, including his reluctance to take on any kind of “hero” role, his depression and PTSD, his aversion to public appearances in the wake of his trauma, and his personality flaws, including his immaturity, lack of responsibility and drunken carousing.

The film opens by giving us a pretty clear picture of Jeff (Jake Gyllenhaal) as a screw-up. He’s just messed up the chicken-roaster at his job at Costco but begs off having to work overtime to fix it because he has to go watch the Red Sox with his friends at his local bar holding his “lucky beer.” We also get to meet his one-time girlfriend Erin Hurley, movingly portrayed by Emmy-winner Tatiana Maslany (Orphan Black), who has broken up with him because he is so unreliable, and who keeps trying to convince him that they are never, ever getting back together. Erin, however, is about to run in the 2013 Boston Marathon, and Jeff works on a large sign to hold up for her as she crosses the finish line the next day. As it happens, though, he is standing directly next to one of the bombers near the finish, and when the bomb explodes, it destroys both of his legs.

In the hospital, where Jeff becomes a double-amputee, he lies unconscious while his family and friends, including Erin, crowd the waiting room, where we make the acquaintance of his loud, vulgar, aggressive family, including his protective but somewhat hapless mother Patty—a superb and almost unrecognizable Miranda Richardson (Churchill), whom we have already seen getting drunk at Jeff’s bar the night before, and her estranged ex-husband, Jeff’s father “Big Jeff” (Clancy Brown), who bullies everyone in sight and even abuses Jeff’s boss Kevin (Danny McCarthy), who it turns out has come to assure everyone that Jeff will remain on Costco’s payroll and to obtain signatures to get the insurance claims going to pay for Jeff’s medical bills. This film may be the best advertisement for Costco ever made, though I assume that was not its main intent. Aside from Kevin and Erin, however, everybody else in that room is to some degree boorish or even vile, and it becomes clear just why Jeff may be as undependable as he appears to be.

Upon waking up, Jeff reveals that he saw the bomber, and when from his hospital bed he gives his evidence to the FBI his family and others begin to talk about him as a “hero.” As he leaves the hospital in a wheelchair, giving a very tentative thumbs-up sign to a cheering crowd waiting for him outside, the pained, bewildered, stressed-out and near-panicked expression on his face reveals just how awkward he is in the “hero” role. But he discovers he has become a very unlikely symbol of “Boston Strong” for his city and for the nation in general. The rest of the film explores how very uncomfortably that mantel sits on his wary shoulders.

In the first place, his personality hasn’t really changed. He hasn’t suddenly become more mature because of his handicap. Maybe it even gives him an excuse to screw up. But he fails to attend his physical therapy sessions, either because he doesn’t get out of bed or his mother, whom he lives with, is too hung-over to take him. Out of lingering feelings for him and perhaps the realization that he really needs her because no one else in his life is reliable, Erin moves in with him, and it appears that without her he would never get anywhere. In the second place, he is suffering from Post-Traumatic Stress, which makes him fear a number of things, including the events that he is asked to attend, such as opening a Bruins hockey game waving a huge flag. Yet still his family, particularly his mother, urges him to make public appearances. Patty is obsessed with his being a hero, and her heart is set on his being interviewed by Oprah.

But third, and most importantly, Jeff is well aware that his injuries have nothing to do with heroism, and that he falls far short of being anything like the icon people have made of him. When first told he is being touted as a hero, his unbelieving response is, “What? For being blown up?” When a couple comes up to him in a bar to ask for his autograph, they tell him that they admire him so much because his strength in coming back from his injuries means that “the terrorists didn’t win.” Jeff finds this attitude strange. “Well,” he says, gesturing to his amputated legs, “at least they got one on the scoreboard.” The great gulf between the public’s perception of Jeff as heroic icon and the real-life Jeff is made especially clear one night when Jeff, on a drunken binge with two of his buddies, ends up driving home because the other two are too wasted to get behind the wheel. One of them lies on the floor and works the pedals while Jeff drives. But it seems even this can’t get him into trouble, since the police see him as a hero as well.

Jeff’s self-awareness, and his self-effacing humor in the wake of personal tragedy, are what keep us from losing all sympathy for him. That plus the fact that Erin stays with him, which makes us believe there is something there worth saving. But he can’t hold on to her forever being the person he was before, and it seems inevitable that she will leave him.

There is one other tsk that Jeff is unwilling to perform, and that is to meet the man who saved his life on the day of the bombing. This is Carlos Arendondo, portrayed with a quiet but unforgettable intensity by Carlos Sanz (from TV’s NCIS: Los Angeles), whose meeting, when Jeff finally consents to it, proves to be a major turning point for Bauman.

The film itself, focusing on the human detritus left by the marathon bombing, proves far superior to last year’s Patriots’ Day, which focused on the manhunt for the bombers. Richardson and Maslany give notable performances in supporting roles, But the film really belongs to Gyllenhaal, whose history of taking on unusual roles that compel him to explore extraordinary extremes of emotional depths and angst (Brokeback Mountain, Jarhead, The Nightcrawler) is capped by Jeff Bauman. He makes us feel all the trauma, all the humiliation, all the inadequacy, all the fear and the bewilderment that his character experiences. This is the sort of role that gets noticed at Oscar-time, and Gyllenhaal may be the first real contender of the season. Nothing in this film is easy or cliché. I’ll give it three solid Tennysons.

Chaucer’s Pardoner from the General Prologue
Scroll to top