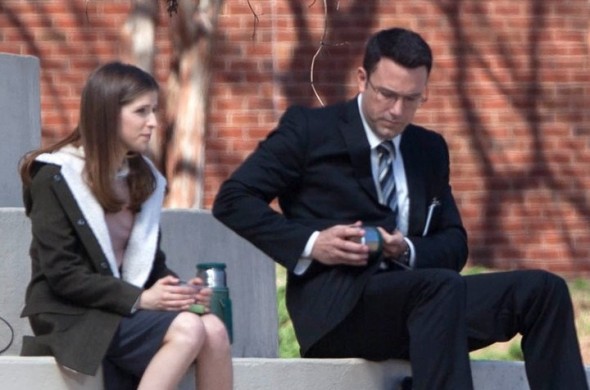 In The Accountant, Ben Affleck plays a kind of cross between Batman and Rainman—a high-functioning autistic mathematical savant who also happens to be a martial arts expert and world-class sniper. If this seems to strain the limits of your willing suspension of disbelief, just wait: there’s more. Affleck’s character, Christian Wolff (one of several aliases he assumes, all the names of famous mathematicians from history), works, as should be no surprise, as an accountant. But although we see him with only legitimate customers in the movie—a poor farmer and his wife and a large robotics firm—he seems to have made huge profits by uncooking the books of top figures in organized crime. Heads of drug cartels, political dictators, and other high-profile, low-class scumbags. It becomes clear why he might need that special set of assassin-skills to defend himself against his own customers, should they want to sever professional ties with him. Yes, Chris has found the perfect job to make use of his unique combination of occupational skills.

Then there’s Ray King (J.K. Simmons), head of the Treasury Department’s Crime Enforcement Division, who wants desperately to track down this accountant with his connections to so many nefarious criminals. But we first see King threatening his talented subordinate Marybeth Medina (Cynthia Addai-Robinson) in order to coerce her into helping him find Chris. So—we have to wonder why King has this obsession, and just how much of a “good guy” he is.

But the Feds closing in are not Chris’s only problem. When a junior accountant named Dana Cummings (Anna Kendrick) finds an error in the books, Chris agrees to examine the past 15 years of books for a robotics company run by Lamar Blackburn (John Lithgow). After Chris finds how millions have been siphoned off the company’s profits, both he and Dana become targets of an expensive hired assassin named “Brax” (Jon Bernthal of T.V.’s Walking Dead). So the question is, will King and Medina catch up with Chris first, or will there be a final confrontation with the very lethal Brax, and will Chris be able to protect Dana?

We get Chris’s backstory through a whole lot of flashbacks. We are shown, first, how his father had eschewed the assistance of specialists who sought to help the autistic young Chris (Seth Lee) live a more integrated life (a rejection that apparently led to the family’s desertion by Chris’s mother). But Chris’s father (Robert C. Trevelier) has his own method of treating autism: a “psy-ops” officer in the military, the father is chiefly concerned that Chris be able to either beat up or kill anybody who disrespects him, and subjects both his sons to vigorous training in firearms as well as martial arts, forcing them to keep going even when they are beaten to a pulp. I guess you’d call it tough love.

In another flashback, we are shown a grown Chris in a federal prison with a second father figure, Francis Silverberg, an accountant for the mob in a maximum security prison for white collar crimes, and played by Jeffrey Tambor (shades of Arrested Development)! It’s from Silverberg, of course, that Chris learns the ins and outs of accounting, which is a snap for him, because of his mathematical acumen. Finally, we get a long flashback from King late in the film that not only explains a seemingly disconnected opening scene in the film, but also explains why King is obsessed with the accountant, and at the same time ties up a whole bunch of other loose ends.

Though I definitely want to avoid any accusation of including spoilers in this review, suffice it to say that all of these strands come together by the end in a string of amazing coincidences that strain our credibility to the utmost bounds of belief. This is, I suppose, not really a problem if we are dealing with Batman or Spiderman or Thor, or any of the other comic-book heroes that have grown to dominate American cinema in recent decades. The Accountant, though, has no such roots, but was written directly for the screen by Bill Dubuque, and director Gavin O’Connor seems to want this to be a genuine thriller with an Asperger twist. But it comes across as a comic book written for the screen, complete with Chris’s own Fortress of Solitude, in the form of a trailer where he keeps piles of cash, gold bullion, collectable baseball cards and comic books, and original by Renoir and Pollack paintings that he has taken as payment. He can get this trailer ready and be gone in minutes if one of his more violent clients decides the accountant knows too much and needs to be terminated.

But this is the most questionable aspect of the movie. Why, we must wonder, does Chris devote his energies to helping the worst of the worst? I suppose it’s all about the money—no honest person is going to pay the kind of fees that will keep our boy in Renoirs forever. Or maybe a lot of it has to do with the element of violence. The way Chris was raised may make him comfortable only in dangerous situations—to take those away would be like Rainman missing Judge Wapner. But where does that leave us as an audience? We are intended to sympathize with Chris, who has, we are told, his own moral code, and will bring, shall we say, consequences down on the heads of those who violate the tenets of that code. That’s fine when the code involves keeping Anna Kendrick from getting killed by hired assassins, but otherwise it seems to involve mainly taking revenge on people who have hurt people he cares about. Apparently the crimes and atrocities his clients commit don’t offend his code unless it touches him personally.  And that is not an unbelievable character trait, but the problem is that the film seems to suggest we should admire Chris for this code. We certainly are rooting for him not to get caught by King or killed by Brax (who seems to have his own code, which is not all that different from Chris’s). That’s easy to do when he’s saving Dana, less so at other times.

And are we supposed to believe that somehow Chris’s abusive father’s sadistic take on parenting was a good thing because it toughened him up and made him the man he is? The answer to that question is left ambiguous: “Were you a good father?” Chris asks someone late in the film, while Chris holds a gun to his head. Are we to believe that he somehow believed his own father was good and loving? Or would his killing this victim be symbolic revenge on his own father?

The Accountant is entertaining if you don’t think about it too much. Affleck is appropriately robotic in the role of Chris, and does occasionally, especially with Kendrick, give us glimpses of an autistic man trying to connect. Kendrick is cute and earnest and likeable as always; Simmons, as always, is gruff and efficient. Tambor is appropriately neurotic. Bernthal as Brax gives perhaps the most memorable performance in the film He’s intelligent, efficient, and seems quite satisfied with what he does for a living, especially when it involves bringing a brutal kind of “Justice” to corporate criminals. So I’ll give this two Jacqueline Susanns, and half a Tennyson for the entertainment value.