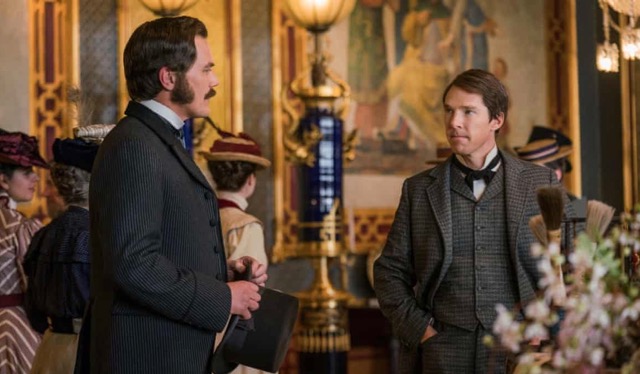 The Current War is a not-so-current movie whose strange and troubled history makes it surprising that you can even get to see it today on the interwebs, but if you’re looking for a movie to stream while you’re locked up and can’t get to a movie theater, you might take a chance on this one. It chronicles the engaging story of the late nineteenth-century competition between Thomas Edison’s electric company, pushing its DC current, and that of George Westinghouse and his rival AC current.

Directed by Alfonso Gomez-Rejon (best known as a television director for Glee and American HorrorStory), from a script written by respected playwright Michael Mitnick and starring Benedict Cumberbatch and Michael Shannon, the original version of The Current War bombed at its premier at the Toronto International Film Festival in September 2017. The studio planned to release it anyway in late November of that year, but something got in the way. Co-produced by Harvey Weinstein and slated to be distributed by the Weinstein Company, the film was yanked from distribution after the sexual abuse charges were brought against Weinstein, and rights to distribute the film were eventually sold by Lantern Entertainment to 101 Studios. Gomez-Rejon, who had insisted the film was not ready for consumption prior to its showing in Toronto, was meanwhile able to get the approval of the film’s other co-producer, Martin Scorsese (whose contract gave him final edit approval), to agree to trim the film’s running time and to shoot five new scenes with Cumberbatch and others. The film was finally released without much fanfare on October 25, 2019. It made barely $10 million in theaters, only about a third of what it cost to make, but it has found new life again, streaming during the current pandemic. Now 60 percent of critics on Rottentomatoes.com give the new “Director’s Cut” version of the film a positive rating, while 79 percent of audience members do the same.

The film opens in 1880 with Edison (Cumberbatch) lighting up a field near his Menlo Park, New Jersey, laboratory as a media stunt to lay his claim as the world’s master of electricity, having invented a light bulb that could hold its glow all night long. Using Direct Current, Edison plans to light up entire city blocks using a form of energy cheaper and safer than the currently popular gas lights. Meanwhile George Westinghouse (Shannon), a successful businessman (and the inventor of a brake system for locomotives) has the notion that, using Alternating Current, he can light up broader areas for less cost. Having invited Edison to dinner hoping to discuss the future of electricity with him, Westinghouse waits on a train platform with his wife Marguerite (Katherine Waterston of Logan Lucky) as Edison’s train flashes by without stopping—Edison has blown him off.

The two companies begin a competition to sell their respective systems to cities across America. Edison, who we are told “could be the richest man in America but he doesn’t care about money,” hits up J.P. Morgan (Matthew Macfadyen from Pride and Prejudice) for half a million to get his DC campaign going. Meanwhile Westinghouse relies on two demonstrable facts: His AC system is more efficient, and it is cheaper. Edison hires a young immigrant inventor named Nikola Tesla (Nicholas Hault from Tolkien)—who by the way insists that AC is a better system—but fails to appreciate his ideas and the two part ways. Meanwhile Edison’s personal secretary Samuel Insull (Tom Holland, the new film Spiderman) also thinks AC is the way to go, and tries to rein Edison in from his more aggressive attacks on Westinghouse. But Edison, still smarting over what he feels was Alexander Graham Bell’s infringement on his own inventions to claim credit for the telephone, does not want something similar to happen as electricity is harnessed to light America’s cities. Tesla, meanwhile, has left Edison and gone out on his own, unsuccessfully. Westinghouse hires him to help ensure the triumph of his AC current. The rivalry ultimately comes down to a competition over who will light up the Chicago’s 1893 “World Columbian Exposition,” with its projected 30 million attendees.

The film’s real turning point comes in what some critics have considered a distraction from the main plot: Edison’s involvement with the development of the electric chair. This development culminates in character-defining moments for both principals. Edison has consistently, and publicly, refused to ever take part in contracts for the military (despite the urging of Morgan and others), vowing never to invent any device that could be used to kill human beings. Indeed, his chief objection to Alternating Current is that he believes it to be dangerous and that it will result in deaths, and so he lambastes Westinghouse to the press as being cavalier about the dangers of his system, sacrificing the safety of American citizens simply for the sake of profit. Westinghouse, meanwhile, declines to criticize Edison to the media, refusing to sink to his level, despite the urging of his wife Marguerite and others. When Edison demonstrates the dangers of AC by killing a horse as a media show (one of a dozen such demonstrations), he is approached by a social reformer looking for a “painless” alternative to hanging for the execution of convicted murderers. Edison agrees to help, as long as the actual execution proclaims it is Westinghouse’s system being used to kill. Westinghouse, obtaining proof of Edison’s involvement, gives the evidence to the press. Thus both men betray their respective standards in order to win the ultimate prize.

Telling you how it all comes out would be too much of a spoiler, though I may have said too much already. My overall impression of the film is positive, and I do think that after a confusing start it gets better as it goes along. The script seems episodic, even disjunct at times, and the opening scenes in particular are short, almost choppy. Since the film covers a thirteen-year period in the lives of two busy men who have a lot of other things going on, it may be that there is too much ground being covered, and that seems particularly to affect the character of Tesla, whose contribution seems unclear and marginal as presented here. Apparently Mitnick’s screenplay went through some sixty drafts over a ten-year period, and began as a script for a musical. The end result might show some of that uncertainty.

But the recreation of late nineteenth-century America, in costumes, art direction and CGI effects (for the Chicago world’s fair) is a sumptuous feast for the eyes. The subject matter itself is so inherently interesting that it transcends any flaws in its execution. Shannon is perfect as the businesslike, unflappable Westinghouse, and nobody plays an arrogant, volatile genius like Cumberbatch—it’s just that this time he does it with an American accent. Macfadyen as Morgan, with a shiny red nose, is believable as Edison’s sometimes exasperated bankroller. Neither Hoult nor Holland is given much to work with. But the most memorable performance in the film comes from Waterston as Westinghouse’s wife Marguerite: She is smart, funny, supportive, and honest as needed, and gives a virtuoso performance in a role smaller than any of the men.

This is a great story told in a serviceable film with some fine performances, and it overcame a lot of hurdles to get where it is. Two Jacqueline Susanns and half a Tennyson for this one.