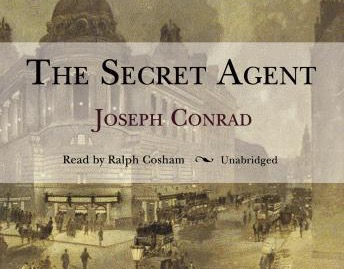 The Secret Agent: A Simple Tale

Back when I was in school, if you were reading Joseph Conrad it meant you were reading The Heart of Darkness, that haunting portrait of human depravity and horror beneath the veneer of civilization. If you were going to delve deeper into Conrad, you might take on those adventurous classics, Nostromo or Lord Jim. Nobody I knew ever read The Secret Agent—it was just a name on a list of “Conrad’s Other Novels” that you might run across while reading those aforementioned giants.

Fast forward several decades and, in the post-9/11 world, The Secret Agent has suddenly become Conrad’s most relevant work. On Modern Library’s famous (and controversial) list of the top 100 novels in English, it was The Secret Agent that ranked higher (at No. 46) than anything else by Conrad (though those other three novels were also on the list).

The reason for this resurgence in popularity for the novel, which, though one of Conrad’s best, was not particularly well-received in its own time, is its focus on terrorism and on political intrigue—themes of significant import in our current milieu. In fact, they were subjects of interest in 1907 as well, when political assassinations and anarchist bombs were often in the news (U.S. president McKinley had been assassinated six years earlier, and it was seven years later, you might recall, that the assassination of Austria’s Archduke Francis Ferdinand detonated the powder keg that ignited the First World War). Conrad made no secret of the fact that he was loosely basing his story on an incident that had occurred in London in 1894: A French anarchist named Martial Bourdin had blown himself up in Greenwich Park when a bomb he had been carrying—for an attack, it was speculated, on the Greenwich Observatory—exploded prematurely. In the preface to his 1920 republication of The Secret Agent, Conrad recalls that the kernel of the idea for the story came in a 1906 conversation about that strange case he was having with his friend, novelist Ford Madox Ford. Conrad had pointed out that Bourdin’s efforts had been completely futile, that the observatory itself had suffered no trace of harm from the attack. Ford had answered casually that Bourdin was “half an idiot,” and recalled that his sister had “committed suicide afterwards.” And thus the novel was born.

Conrad sets his novel in 1886 London, a few years before the incident that inspired it. His protagonist is Adolf Verloc, an Englishman with French ties who runs a small shop that sells curiosities and pornography, and he lives above the shop with his wife Winnie, her mother, and her brother Stevie, who is a grown boy but has the mental age of a child. Winnie, who has married Verloc solely to have someone to provide for her mother and brother, nevertheless is a devoted wife, and one who prefers not to think deeply about things, or question Verloc’s activities. She is most concerned with taking care of her aging mother, and of her developmentally challenged brother as if he were her own child. For his part, Stevie is revealed to be highly sensitive, and unusually sympathetic to anyone, human or animal, who is suffering.

During his evening hours, Verdoc meets with a small group of professed anarchists in his own house: The group includes Alexander Ossipon, a former medical student who now lives by seducing working class women and living off their earnings, and who subscribes to the degeneracy theories of the Italian criminologist Cesare Lombroso—he contemplates the features of Stevie, for example, and identifies him as a born degenerate. Another member of the group, Karl Yundt, known as “the old terrorist,” considers Lombroso an ass. “The Professor,” the most antisocial member of this anarchist group, wants to tear down society and looks forward to a new Darwinian world order in which all degenerates (like Stevie)—all who are weak—will be eliminated to make way for the strong. “The Professor” is a specialist in explosives. (He was in fact a character highly admired by Ted Kaczynski, the Unabomber, who as a teenager was never without a copy of The Secret Agent. But that’s another story.) In a monologue eerily prescient in light of contemporary terrorist attacks, “The Professor” describes how he always walks London streets with a bomb under his coat, so that if anyone tries to arrest him he can detonate the bomb by squeezing a rubber ball in his pocket, thereby destroying himself and anyone else in range.

Best known of the members of Verloc’s group is the philosophical nihilist Michaelis, a man who famously spent some years in prison for anarchist activities and has come out hugely obese (in this Conrad deliberately alludes to the life of the famous anarchist Mikhail Bakunin, a fit man who emerged after a dozen years in prison weighing close to 300 flabby pounds). Philosophically, though, Michaelis is modeled after Prince Peter Kropotkin, the Russian revolutionary who, after imprisonment after the 1882 assassination of Tsar Alexander II, was like Michaelis living in England at the time Conrad’s novel was published, and was, like Michaelis, popular in London society.

Verloc’s little anarchist cell is notable for putting out a weekly pamphlet called F.P.(i.e., The Future of the Proletariat), and for talking a lot but not doing anything. Turns out this inactivity becomes something of a problem for Verloc, for this whole life is merely a front for his true occupation, which is acting as an agent provocateur for a foreign government. What sets the plot of the book in motion is Verloc’s being summoned to an unidentified foreign embassy by a certain Mr. Vladimir, new First Secretary of the Embassy. The name “Vladimir,” of course, suggests that the country is Russia, and Conrad was quite familiar with exiled Russian revolutionaries living in England: His father, Apollo Korzeniowski, had been forced into exile for his revolutionary activities against the Russian empire on behalf of Poland. However, Vladimir’s predecessor in his position, who had employed Verloc in the first place, had the very Germanic sounding name of Baron Stott-Wartenheim. So the Embassy may just as well be German or, given the turbulent situation in the Balkans at the time, Austrian. In any case, it belongs to a European country appalled by Great Britain’s cavalier policy of allowing exiled revolutionaries and terrorists to take refuge in England where, it is suspected, they freely meet to plan new terrorist activities unchecked by the British police force.

It also appears that Verloc has been doing virtually nothing to earn his monthly stipend from the Embassy—Conrad makes it clear that laziness is Verloc’s dominant character trait. And Mr. Vladimir insists that Verloc do something to earn his keep or risk being cut off, thus making him unable to support his needy household. Vladimir gives him one month to carry out a terrorist act on British soil—something that can be blamed on the exiled anarchists living in London, and so incite public opinion to advocate change in British policy toward these revolutionaries. And the target Vladimir chooses is Greenwich Observatory.

As in some of his other narratives (Lord Jim, for instance), Conrad never actually describes the climactic moment of the novel, the attempted bombing itself. He fast-forwards the story to after the failed attempt on the observatory, when the police find the address of Verloc’s shop stitched into the collar of the coat the bomber had been wearing before blowing himself up. Two police officers begin investigating the bombing: One is Chief Inspector Heat, who, it turns out, has been employing Verloc as an informant for some time, and who wants to pin the bombing on Michaelis; the other, Heat’s boss, is the unnamed Assistant Commissioner, whose wife is a Great Lady at the center of London’s social world and a great admirer of Michaelis, and who therefore is determined to steer the investigation in another direction.

The novel takes at least three major twists as it moves inexorably toward its conclusion, and I don’t want to spoil it for any readers with this review. I do want to say that this novel is a fine example of Conrad at the height of his powers. Like few writers since, Conrad is able, as here, to create a page-turning story that also, in terms of characterization, prose style, thematic complexity, and narrative structure, warms the cockles of literary scholars’ hearts. Even if you’ve never liked Conrad, I believe you will like this book. Four Shakespeares for this one.

The Current War
Scroll to top