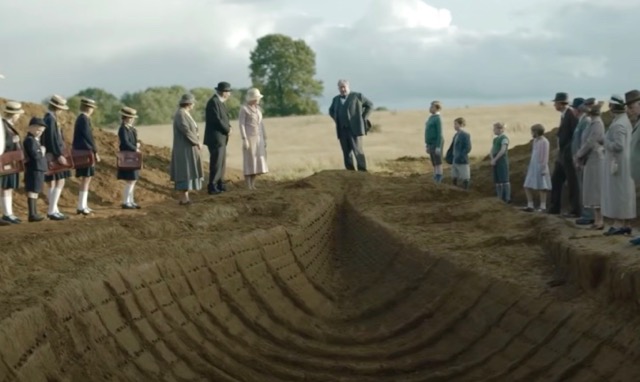 He Said:If you’re a big fan of Beowulf (and let’s face it, who isn’t?) then you’re well aware of the dark, elegiac tone that hangs over that poem, and the pervasive theme of ubi sent (“Where are they?”) bleeding through every alliterative half-line: “These were great men, and did great deeds—where are they now?” Where they are is dead and gone, their ashes buried under mounds of earth. Their deeds, the wars they fought which seemed so vitally important at the time, are buried with them. Their only survival lies here, in the poem, for it is art, the work of the human mind, and not the business of the transient world, that survives.

That same theme lies at the heart of the new film from Simon Stone, The Dig, which takes as its subject the greatest archeological find in British history, the discovery of the 7th-century ship burial at Sutton Hoo in Sussex. Since its unearthing in 1939, that discovery has been ineluctably linked with Beowulf, because the elaborate gold ornaments of the ship’s burial chamber are solid evidence that the rich material world evoked by the Beowulfpoet was real and not poetic fancy. Though never referenced in the film, the magnificently wrought iron and bronze helmet from the Sutton Hoo hoard (now on display at the British Museum), with its eyebrows terminating in boar’s heads standing over the cheek bones, was a physical example of the boar’s head helmets readers of the poem had been trying to envisage for generations. In the film, Charles Phillips (Ken Stott from The Hobbit films), the head archeologist assigned to the dig by the British Museum, waxes poetic himself, declaring that these precious artifacts demonstrate that these people, dead for 1,400 years, were not simply warring barbarians but a civilization of culture and beauty. Like the Beowulf poet, the artifacts speak profoundly of those no longer here.

Mortality whispers “ubi sunt” from every frame of this film. Set more than eighty years ago on the eve of World War II, it presents characters who very conspicuously are no longer with us, on the eve of another war which, in time, will be as forgotten as that between Beowulf’s Geats and Frisians. In this story, the wealthy English widow Edith Pretty (Carey Mulligan) hires experienced working-class excavator Basil Brown (Ralph Fiennes) to dig into some old mounds on her property at Sutton Hoo, thinking there may be some interesting artifacts buried there. Brown forms a Platonic bond with Edith and becomes a father figure to her young son Robert (Archie Barnes), whose interests are more in the future and space travel than in the East Anglian past. Soon Edith’s cousin Rory Lomax (Johnny Flynn from last year’s Emma.)—biding his time before being called up to duty with the RAF—arrives to help with the dig.

When Brown uncovers the impression of the ship, there is suddenly a great deal of interest from the local Ipswich museum and from the British Museum itself in the remarkable discovery, and Phillips comes blundering in, bringing with him the young archeologist John Brailsford (Eamon Farren from TV’s The Watcher) and the ill-matched husband-wife team of Stuart and Peggy Piggot (Ben Chaplin from Snowdenand Lily James from last year’s bloody awful Rebeccaremake). Before long two things become clear: that beneath the very restrained British veneer protecting this collection of diggers strong passions are going to be unearthed, as is, inevitably, an awareness of their own mortality, the transience of this mortal life.

She Said: Not being a fan of Beowulf (my English-major course-taking decisions were often contingent on Beowulf not being on the syllabus), I missed much of what He Said references above, and yet I still found the film enthralling. You don’t have to be able to recite Beowulf in West Saxon Old English to understand the fleeting feeling of life on earth as a member of a violent and vulnerable species. The ship Mr. Brown finds isn’t really even a ship, but the memory of one preserved in the earth by the sand that filled in where the ship materials decomposed. Mrs. Pretty, performed pitch perfectly with the sad beauty Carrie Mulligan is so expert at bringing to a role, is ill and facing her own mortality from the ravages of a childhood illness. The war is about to explode on the Continent and men are being called up across England as London prepares for air raids. Mrs. Pretty’s own husband has died, leaving his young son without a father. This film is lousy with memento mori themes. And then Mr. Brown finds a big one at the direction of Mrs. Pretty. So, it’s not a sunny film.

And yet the emotional experience of the film is very satisfying, perhaps cathartic, especially during our own period of civilizational upheaval, physical danger and, most of all, loss. This is one of those films that loves its characters, feels “hand-made” and intimate and comes into the psyche of the willing viewer with a meaningful and tender experience rather than a didactic tone. It helps that the scenery is charming and gentle, that Mrs. Pretty’s clothes are to-die-for feminine ’30s-era beauties, muted, not twee, which she wears comfortably as a rich woman would. In fact, during the film, I posted on Facebook that I wished God would grant me the confident assertiveness of the rich British woman—one of her most appealing traits was that she knew who she was, she knew she held control of her land and resources and that she could clap back at the mansplainers in her presence in favor of what she knew to be right and loyal. I found her to be very inspirational beyond the drum-beat of a reminder that our lives are fleeting.

He Said: Shout-out to costume designer Alice Babidge, who put Mrs. Pretty in those clothes as well as dressing her son Robbie in that awesome rocket-ship sweater from the Buck Rogers thirties. And I agree with you about Mulligan’s spot-on performance. Interestingly, she was apparently a last-minute replacement for Nicole Kidman in the role. The real Mrs. Pretty was more Kidman’s age—Mulligan is about twenty years too young for the historical Mrs. Pretty, but she has the gravitas to carry it off. As for Fiennes, his performance is a thespian tour de force from one of our premier actors—if all you can remember of Fiennes is his turn as “he who must not be named” in the Harry Potter movies, let me remind you of a few little things called Schindler’s List, Quiz Show, and The English Patient, in which Fiennes first showed his dazzling talent. Here, as the quiet, understated Brown, he makes you forget that he’s actually acting.

I’d be remiss not to mention that Moira Buffini’s screenplay is based on a historically based novel of the same name by John Preston, who, incidentally, is in fact the nephew of Peggy Piggot, the character played by Lily James in the film. We can imagine, but never know, what personal insights Preston may have gotten from his aunt that he incorporated into his story. But let me ask you this, Jones: Did you expect Fiennes and Mulligan to develop more of a romantic connection? Was that something that would have made the movie more appealing to a Hollywood-fed audience?

She Said: I don’t think I’m the one to ask what would make Hollywoodies love a movie, but I found their growing friendship and mutual respect to be more rewarding than a pretend romance, partly because I enjoyed the relationship of Mr. and Mrs. Brown (she begins as a kind of two-dimensional “problematic wife” character, but this relationship is also allowed to flower and flourish naturally in the film).

He Said: Yes, Mrs. Brown (played convincingly by Monica Dolan of A Very English Scandal and Wolf Hall) steps in just when you think there might be something cooking between Brown and Mrs. Pretty. Overall, this is an impressive British historical costume drama in the Merchant Ivory tradition. I’m going to give it three Soderberghs and half a Hitchcock.

She Said:I’ll go full Hitchcock on this one with four Hitches for this lovely film, so very good at what it’s good for…and more!

We’re Watching It and You Should Too:

This is available on Amazon Prime (though you may need a BritBox or Acorn add-on) is a devastatingly sad, expertly acted three-season British series starring Nicola Walker as DCI Cassie Stuart and Sanjeev Bhaskar as DI Sunny Khan trying to solve cold cases after bodies are found decades later. Each season focuses on one victim, the lives of those somehow involved in the original crime and the resolution of the long-cold case. It can be confusing at first as you don’t know how the stories intertwine, and it passes through unbearable sadness. But the denouement each season relieves some of that pain with a grief that can now be at peace. I’m rewatching it with He Said after having binged all three seasons on my own.

Here’s what the book is about:
When Sir Agravain leads a dozen knights to arrest Lancelot in the queen’s chamber, he kills them all in his own defense-all except the villainous Mordred, who pushes the king to make war on the escaped Lancelot, and to burn the queen for treason. On the morning of the queen’s execution, Lancelot leads an army of his supporters to scatter King Arthur’s knights and rescue Guinevere from the flames, leaving several of Arthur’s knights dead in their wake, including Sir Gawain’s favorite brother Gareth. Gawain, chief of what is left of the Round Table knights, insists that the king besiege Lancelot and Guinevere at the castle of Joyous Gard, goading Lancelot to come and fight him in single combat.