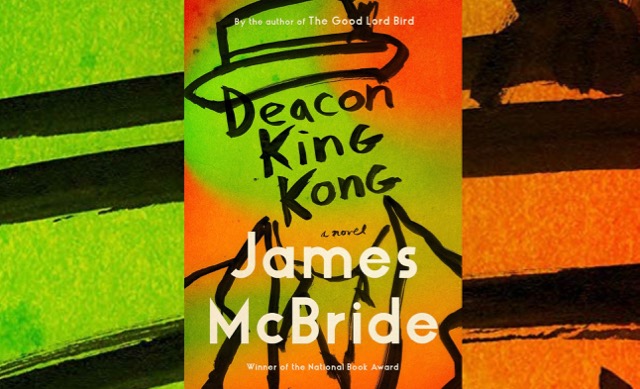 James McBride is the acclaimed author of the National Book Award winning novel The Good Lord Bird (2013). He also wrote the popular memoir The Color of Water: A Black Man’sTribute to His White Mother (1995), which spent two years on the New York Times bestseller list; wrote the historical World War II novel Miracle of St. Anna (2002), which was made into a 2008 film of the same name by Spike Lee; has received significant recognition (including a Stephen Sondheim and a Richard Rogers award) as a composer and saxophonist; and was awarded a 2015 National Humanities Medal by President Obama for what the president called “humanizing the complexities of discussing race in America. Through writings about his own uniquely American story, and his works of fiction informed by our shared history, his moving stories of love display the character of the American family.” Yet for all of this, it’s possible that his most recent novel, Deacon King Kong, may be his highest achievement.

You might feel a trifle overwhelmed in the first chapter as you are introduced to some twenty characters living in the Causeway Housing Projects in South Brooklyn, characters with names like “Bum-Bum,” “Hot Sausage,” Dominic Lefleur the “Haitian Sensation,” “The Elephant,” Sister Gee, and “The Cousins” (Nanette and Sweet Corny). But the crowd makes you feel at home in the projects, kind of like a big block party. That is, until our title character pulls out a .45-caliber Luger pistol in front of sixteen witnesses and shoots into the face of a 19-year-old local drug dealer named Deems Clemens. Deems turns at the last moment and the bullet grazes the side of his head, taking off most of his ear. The shooter is “Deacon” Cuffy Lambkin (known to most of the folks in the Causeway as “Sportcoat,” but sometimes called “Deacon King Kong” after the best home-made liquor in the neighborhood cooked up by the janitor Rufus on the next block). The 71-year-old Sportcoat used to coach the Causeway Houses boys’ baseball team and Deems had been the team’s star pitcher, who seemed destined to a career of college ball that might lead to a major league contract, until he’d been sidetracked into making fast money working for a drug kingpin. Sportcoat had also been Deems’ Sunday School teacher at the local Five Ends Baptist Church, where Sportcoat is now a deacon (though one of the novel’s running jokes is that nobody seems to know exactly what a deacon does). None of this explains why Sportcoat shot Deems, and Sportcoat doesn’t seem to remember himself, once the alcoholic deacon comes around after his drunken spree.

And this is just the first chapter. But it isn’t only the roistering, turbulent action that gets your blood stirred up while reading this book. It’s also the author’s style. We are often treated to long sentences that go off like a string of firecrackers, their sense turning again and again in a flamboyant surge of multilayered perspective. In one curious chapter called “The March of the Ants,” McBride describes the annual visit of a colony of Colombian ants to the projects, who make their pilgrimage specifically to eat a load of cheese that is mysteriously delivered to the neighborhood every month—sent by Jesus according to some members of Five Ends Church. About the ants arriving from Colombia, McBride writes,

“And there they stayed, a sole phenomenon in the Republic of Brooklyn, where cats hollered like people, dogs ate their own feces, aunties chain-smoked and died at age 102, a kid named Spike Lee saw God, the ghosts of the departed Dodgers soaked up all possibility of new hope, and penniless desperation ruled the life of the suckers too black or too poor to leave, while in Manhattan the buses ran on time, the lights never went out, the death of a single white child in a traffic accident was a page one story, while phony versions of black and Latino life ruled the Broadway roost, making white writers rich—West Side Story, Porgy & Bess, Purlie Victorious—and on it went, the whole business of the white man’s reality lumping together like a giant, lopsided snowball, the Great American Myth, the Big Apple, the Big Kahuna, the City That Never Sleeps, while the blacks and Latinos who cleaned the apartments and dragged out the trash and made the music and filled the jails with sorrow slept the sleep of the invisible and functioned as local color.”

The author who comes closest to matching this kind of writing, to my mind, is that other chronicler of race in America, William Faulkner, whose wandering, colloquial sentences require similar mental gymnastics on the part of the reader. That comparison with Faulkner is not just out of the blue. Like Faulkner, McBride is not shy in demonstrating the hardships with which white Americans have, even unconsciously, burdened black Americans, but is also more than happy to explore areas of common humanity and the opportunities for true love and partnership across racial and ethnic lines. And so it is in this novel.

In this regard, of course, it is the individual characters who play the greatest part. There are plenty of characters in Deacon King Kong, some quirkier than others, but for the most part presented sympathetically, as from a perspective of someone who actually likes people in all their various shapes and forms. The main characters here all tend to be looking for something: Sportcoat is looking for the church’s Christmas Fund, which may have had anything from three to five thousand dollars in it, and which his late wife Hettie hid away and never told anybody where before she died. Hettie, by the way, still argues with him on a regular basis. Or at least, he is constantly arguing with her. As for Deems, like everybody else, he’d like to know why Sportcoat shot him. He’d also like to break away from his supplier and switch to another, which means that the out-of-town assassin sent to punish Sportcoat is likely to be after him as well. The Elephant, an Italian gangster involved in smuggling and transporting stolen property but who refuses to have anything to do with drugs, is approached by an old Irish friend of his father’s (who happens to own a bagel shop—go figure) who is looking for a valuable object he gave to Elephant Senior for safekeeping, something the size of “a bar of soap,” but the Elephant has no clue where it’s hidden. And then there’s the Irish cop Dobbs, who wants to protect Deems and/or Sportcoat, but is also only a few months from retirement, whom nobody in the church really trusts except perhaps Sister Gee, the pastor’s wife. And besides all of that, where in heaven’s name is that cheese coming from every month?

These questions are ultimately all intertwined, as are the characters’ lives, and some answers may surprise you and others you’ll see coming a mile away. I won’t give any spoilers here, but the final impression you get of the Causeway Projects is that this is a neighborhood held together “in the palm of God’s hand,” as the motto of Five Ends Baptist Church puts it. McBride himself grew up in a South Brooklyn housing project, and his parents founded the New Brown Memorial Baptist Church in Red Hook, Brooklyn. So it’s no surprise that both the church and the neighborhood of this novel seem so vividly real. The fact that McBride’s father was black and his mother a Jew who converted to Christianity may be one reason that he refuses to demonize any group of characters in the book. It’s probably also significant that the action of the novel takes place in 1969—the summer of the moon landing, Woodstock, and, most importantly, the triumph of the Miracle Mets who pulled off their incredible and inexplicable World Series run that year. It takes an apparent miracle for things to work out in this novel, and McBride frames the book with a beginning dedication “For God’s people—all of ’em,” and ends it with an acknowledgement that reads “Thanks to the humble Redeemer who gives us the rain, the snow, and all the things in between.” For that time in between, it seems we are in the palm of God’s hand, so it should be no surprise that things work out for the people in the novel. All of ’em.