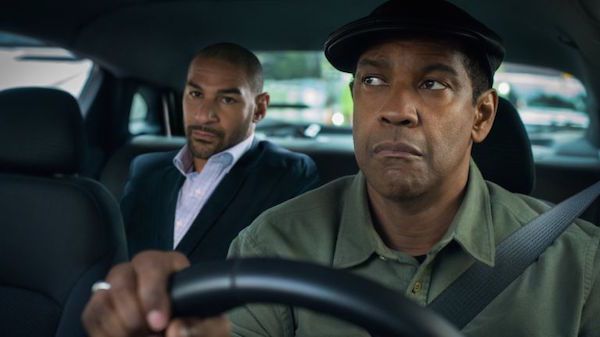 On a summer weekend dominated not by hugely anticipated blockbusters but rather by a pair of not particularly eagerly-anticipated sequels, Denzel Washington’s The Equalizer 2narrowly beat out Mama Mia 2for box office champion with a fairly anemic (by today’s summer opening weekend standards) $35 million. In the lull between the Incrediblessequel and Mission: Impossible’s opening, this film is an entertaining enough diversion, even though it plays like a bloated television episode of a not-too-imaginative action series—one that would have fit neatly into an hour-long network slot, but that seems to have to stretch its content with long, slow scenes intended to expand it to its 129 minute-length. And trust me, you feel every one of those last 29 minutes.

What makes the film as diverting as it is is, of course, the presence of Denzel Washington. One of the great actors of his generation, the 63-year old Washington agreed, in Equalizer 2, to star in the first sequel of his distinguished career. The chance to work once more with Antoine Fuqua (who directed Washington in his Oscar-winning role in Training Day, as well as in the Magnificent Sevenremake, in addition to the original Equalizer) and screenwriter Richard Wenk (who teamed with Fuqua to write The Magnificent Seven and The Equalizer) no doubt had a bearing on Washington’s decision to do the sequel. Money was surely another factor: The original Equalizermade some $192 million worldwide in 2014, and it’s a good bet the sequel will gross at least that much.

The first film was based on a CBS television series of the same name that ran from 1985 to 1989, starring the British actor Edward Woodward as a retired secret agent trying to live under the radar in New York City, but who ends up using his impressive skills to help innocent people out of dangerous situations. Twenty-five years after the series was defunct, Fuqua resurrected the premise in Boston, with Washington starring as Robert McCall, a former CIA agent working quietly at a Home Mart hardware store. His wife has recently died, and he promised her that he would quit his old life. McCall befriends his co-worker Ralph and helps the young man pass his qualifying exam to become a security guard. He also spends sleepless nights at a diner reading Hemingway, where he befriends a teenaged sex worker named Alina and discusses The Old Man and the Seawith her. Oh, and while performing all these kindnesses, he also manages to save Alina from the Russian Mafia, using those skills he told his dying wife he was giving up.

Audiences liked the premise of that film well enough to encourage this sequel, and in the current film McCall returns to his vigilante ways. He’s still keeping a low profile, trying to live out of the public eye. Now he’s left the hardware store to take a job as a Lyft driver. But he’s still the same guy: He’s moved from Hemingway to Proust in his literary explorations, but he still befriends folks in need whom other people seem to overlook. One of his regular fares is an aged Holocaust survivor played by the delightfully cast Orson Bean, for whom he takes the time to try to help recover a stolen painting from the old man’s youth. In a more developed (and more clichéd) sub-plot, McCall takes under his wing a neighborhood teenager named Miles (Ashton Sanders of Moonlight), who seems at a crossroads between making use of his notable artistic talents and joining a neighborhood gang. In addition to ripping Miles away from his new gang at gunpoint, McCall also hands the kid a copy of Ta-Nehisi Coates’ memoir Between the World and Me.Guns and books will save us, is McCall’s philosophy.

But the main plot of the film involves McCall’s old CIA chumSusan Plummer (Melissa Leo, returning from the first film), who drops in to his apartment without warning, apparently simply to tell him she’s sorry about his wife dying and to advise him that engaging in random acts of violence to help innocent victims is not going fill the void in his life. And then she’s off to Brussels to investigate the murder of one of her agents and his family. As might be expected, she’s also killed while making the investigation, a crime that spurs McCall into action.

McCall has been assumed dead by everyone he used to know, but to investigate Susan’s murder he takes the chance of revealing himself to his old partner Dave (Pedro Pascal from TV’s Gameof Thrones), who also happened to be with Susan in Brussels. But as he tries to find the perpetrators behind Susan’s death, McCall finds himself the target of a group of international criminals bent on his destruction. At one point he rescues Susan’s husband Brian (a woefully underused Bill Pullman, who also returns from the first film, apparently just to increase the star power for the brief instant he is onscreen): The gang is apparently trying to cut off loose ends.

In the background, throughout the film, are TV and radio weather reports warning of a significant storm moving into the Boston area. It’s no great surprise, then, that the climax of the film involves McCall being pursued through a storm-swept Massachusetts seaside town by a team of four assassins. Although it’s a scene replete with violence of the most gruesome variety, it’s also the most boring scene in the film, stretching on beyond the limits of endurance and of patience for what seems an eternity. This isn’t the only place in the movie where an editor would have come in handy, but it’s certainly the most badly in need of one.

Ultimately the movie is a forgettable diversion for a hot afternoon in July. Denzel is always worth watching, and nobody else in the film has enough of a role to get too excited about, though Leo, Pascal and the young Sanders do the best they can with the little they are given. The subplot with Orson Bean seems totally unrelated to the rest of the film: It is intended, clearly, to show McCall’s good heart and his motivation to help his neighbors, especially those to whom life has dealt a losing hand. But McCall has so little to do with this and it is so underwritten, that when the subplot resurfaces at the end it seems irrelevant. And I’ve already suggested the banality of the melodramatic keep-the-poor-kid-out-of-the-gang subplot. Oh, and did I mention the interminable climactic scene? This film might have been a fairly snappy 90-minute action flick. Instead it drags its feet for 129 minutes.

There does seem to be a moral to this tale of vigilante violence, and it’s a relatively simple one: The villain of the piece justifies his actions by claiming that there are no good people or bad people— just “unfortunates” whose names appear on his list of people who must be killed. This is diametrically opposed to McCall’s take on things, which is essentially that he must protect good people who happen to be “unfortunates” from others who are clearly bad. And that is what makes him a sympathetic hero.

Washington has declared publicly that at one point in his life he was, like the film’s Miles, a young person in danger of taking a wrong turn, but that somebody helped him and kept him from slipping through society’s cracks. This could explain why a star of his magnitude makes a film like this one. So, we get the message, Denzel. Two Jacqueline Susanns for this one, with a half a Tennyson thrown in for Denzel’s esteemed presence.