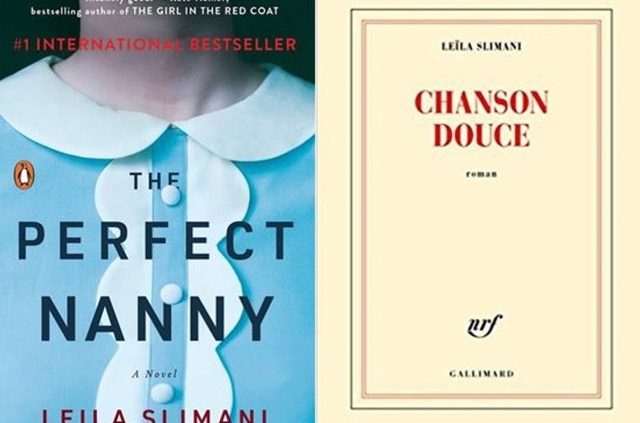 Leïla Slimani won France’s most prestigious literary award, the Prix Goncourt, for her 2016 novel Chanson Douce (literally “Sweet Song”).  She is the first Moroccan woman to be so honored, and at the age of 35 became the face of French literature. French president Emmanuel Macron even asked her to be his Minister of Culture, a post she declined, but she more recently accepted the unofficial job as Macron’s “personal representative to French-speaking countries”—particularly north African countries who might see the French language only as a reminder of colonialism.

Chanson Douce has now been translated into at least 18 languages, with a number of others in process. An English version of the book was published in 2017 in the United Kingdom, with the title Lullaby (a fairly accurate translation of the French “Sweet Song”), but when the American version came out early in 2018, the publisher chose to go with The Perfect Nanny, thinking that Lullaby was just too sweet and sleepy for what the book was. And trust me, the book is neither sweet nor sleepy.

Slimani was inspired to write the book by a 2012 news story she had seen about a New York nanny who had murdered two of the children in her care: The mother in this case had taken the third child to a swimming lesson, and had come home to find the other two, a boy and girl, bleeding to death in the bathtub, and the nanny in critical condition, having tried to slit her own throat. Slimani coopts the story for her plot, moves it to Paris, and adds a personal touch by making the mother North African like herself. But she pulls no punches as she places the gory details of the double murder and attempted suicide right in our faces from the novel’s first sentence: “The baby is dead.”

From that stark beginning, and a few gruesome details that follow, the book goes on to retrace the history of the nanny, Louise, and her relationship with Paul (a music producer) and Myriam (a defense attorney), and their young children, Mila and the baby Adam. Frustrated with staying at home and putting her promising career on hold, Myriam wants to go back to work—even though much of what she earns will be eaten up by the expense of childcare. But this upwardly mobile couple in Paris’s gentrifying Tenth Arrondissement decides to push forward and find a nanny, planning ahead to devote an entire Saturday afternoon to interview candidates: “Not too old, no veils, no smokers,” Paul pronounces as his chief criteria. Petite, blonde, early middle-aged Louise—a white, European French woman with enthusiastic references, in a profession dominated by immigrants whom Myriam (a Moroccan herself) fears will become too familiar with her—appears by all standards to be the perfect nanny.

It’s easy to see how this book could become extremely popular. Working mothers will recognize many of their own anxieties exercised in Myriam’s fears and desires. The yearning and often the need to pursue a career while at the same time having to entrust the care of children to a stranger are worries all too familiar in the lives of modern women. And what happens if the person to whom you’ve entrusted those children (your own dearest responsibility, your mind keeps telling you) turns out not only to be unworthy of your trust but actually a severe danger to those children’s welfare? This book strikes at the very heart of women’s insecurities.

In addition, the book has an appeal to those caught up in the current “true crime” craze that has become a national, even an international, obsession, again most particularly among women. It’s hard to pinpoint the root causes of this obsession, but pundits have suggested a number of possibilities: Men of course, commit almost all violent crimes, but women, of course, are the targets of most of those crimes, and hence are far more interested in stories about them, not simply for the adrenaline thrill of fear, like a roller coaster ride, but also for the practical value of learning how and why crimes were committed, and what women (read “they themselves”) might have done to prevent or escape such crimes. Hence the vast female audience for crime-focused podcasts like Serial, Crime Junkie, and my wife’s passion, My Favorite Murder. Such programs help her to cope with the misogyny and violence of contemporary American culture.

A book like The Perfect Nanny, which deals with violence directed not at the woman herself but more frighteningly at her children, and not by a man but, unthinkably, by another woman, presses all kinds of buttons in a female readership.

But this is not a book that will appeal only to women. Although the husband Paul is much less of a major character in the story than Myriam, one cannot help but feel his frustrations as well. Men often tend to approach domestic situations largely as problem solvers—what do I need to do to fix this or make this come out right? It’s easy to feel, with Paul, the deep frustration of having things spin completely out of control, and for reasons he can’t begin to understand. Such frustration may be less desirable than the thrill that Murderinos might feel, but it’s certainly no less real.

For myself, I was struck by two things in particular about the novel, which may be quite different from the reactions most people will have: First, from the very first chapter, I couldn’t help but feel I was reading something by Hemingway, if Hemingway had been a woman writing about the mundane tasks of childrearing. That is to say, the subject matter couldn’t have been farther from “the wound, the break and the code” typical of the Hemingway hero. But the short, declarative and mainly simple sentences, the writer’s avoidance of interpretation and speculation in favor of suggestion, or what Hemingway called the “iceberg principal” in which three-quarters of the meaning was below the surface, these are hallmarks of Slimani’s style in this novel. Here, the cold unemotional tone only serves to underscore the horror of the narrated events themselves. The sentences that tfollow that devastating first one are all of this type: Basic. Simple. Suggestive:

“It took only a few seconds. The doctor said he didn’t suffer. … The little girl was still alive when the ambulance arrived. … On the way to the hospital she was agitated, her body shaken by convulsions. … Her lungs had been punctured …”

Hemingway at his best.

Secondly, as the book went along I felt more and more that I was reading a novelized version of Orson Welles’ Citizen Kane: You may remember (and if you don’t, you really ought to go watch the movie) that the film opens with the death of Charles Foster Kane, wealthy and controversial media magnate. A reporter interviews one person after another in a vain attempt to discover who Kane really was, what made him the man he became. But in the end Kane remains a mystery, with each new bit of information, like another piece in a jigsaw puzzle adding something, but never enough to understand the whole. In the case of Louise, we are given several pieces of her history and background, but never enough for us to fully understand what ultimately makes her commit this unthinkable crime—we are left, in the end, like Myriam and Paul, bewildered.

Ultimately this book is one that moves fast and that you may have trouble putting down. Particularly, I imagine, if you are or have been a working mother or if you care for children yourself. The Perfect Nanny is a blend of crime fiction, suspense and literary sophistication that will please on more than one level, and that will haunt you for long after you finish that last page.

I give it three Tennysons and half a Shakespeare.

Named a finalist for the INDIE award for best Mystery novel of the year:

Once Upon a Time…In Hollywood
Scroll to top