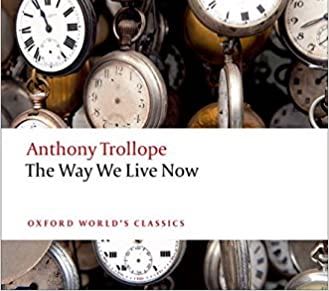 The Way We Live Now

Trollope never met an 800-page novel he didn’t like. Like Dickens and other Victorian novelists, Trollope wrote many of his novels for periodical publication, and so they were first published one section at a time—and the more serial installments, the more the writer was paid. When those novels were published in book form, they tended to be pretty hefty. Trollope’s The Way We Live Now, one of the last significant novels published in serial form, is his longest: 896 pages in the Modern Library paperback edition, 32 hours and 25 minutes in the Audible version that I listened to.

Trollope wrote the novel in 1873 and it was subsequently published in serial form from February 1874 to September 1875, but sales of the serialized book were so disappointing that the publisher brought out the book in a two-volume edition in July of 1875, before the serialization had even finished. Reviews of the book were poor, and popularity with the reading public waned after its publication. But by the 1940s, the book was regarded as a masterpiece, and when interest in Trollope blossomed among literary scholars in the 1990s, The Way We Live Now began to be considered his greatest work. Indeed, recent “Greatest Novels” lists from both The Guardian and The Observer include The Way We Live Now among the greatest books in English.

The unpopularity of the book in its own time might be explained by the vigor with which Trollope criticizes “the way we live” in 1873. In 1872, Trollope returned from an extended visit to Australia and New Zealand that had lasted some 18 months, only to be shocked and appalled by what he found in England at the time. “It seemed there was but one virtue in the world,” Trollope wrote: “commercial enterprise.” What Trollope saw—financial scandals on the one hand and rampant and irresponsible speculative investments (especially in railroads) on the other, that must ultimately lead to the bursting of the great financial bubble—inspired him to write his great sendup of the slippery financial wizard Augustus Melmotte. In Melmotte, Trollope embodies the prototypical financier of dubious ethics who seemed to abound in London prior to the worldwide financial panic that followed in 1873, even as Trollope was writing the book. By the time the book began appearing in 1875, financial scandal was old news, perhaps too familiar to his readers to seem new or interesting. They didn’t need to read about this kind of corruption. They’d lived through it.

At any rate, that’s my own suggestion as to why the book wasn’t particularly popular in its own day. But the fact is that even now, nearly 150 years later, there is something quite familiar about the financial flim-flam man and the kind of financial dealings that can cause economic ruin. Just think 2008 all over again. So Melmotte is a timely villain, whatever else he is. He is ruthless, corrupt, and bullying, and quite secretive about his dealings. His origins are shadowy—nobody knows where he came from or whether he actually has all the money that he seems to have. There are rumors that he came to London to escape some economic scandal on the continent. Some say he may be Jewish, although he takes steps to suggest he is a Protestant, and also that he is secretly a Catholic. These latter implications are a part of his political campaign as, being the talk of the town, he decides to run for a seat in Parliament for Westminster as a conservative. He has no political experience, but money can buy anything, right? Including, maybe especially, political influence. He knows absolutely nothing about government or about how Parliament works, but as a recognized star of the business world, he and other gullible people figure he must know how to govern the country. He’s elected, naturally, but this, of course, turns out as badly as you might expect. Mainly, though, Melmotte’s story is of a bloated spider-like presence at the middle of a financial scam involving speculation in a proposed railroad in North America, between San Francisco and Vera Cruz, Mexico, until that scheme collapses and Melmotte is disgraced.

There are, of course, other important characters and myriad subplots in this 100-chapter novel. Of particular interest is Lady Carbury, a widowed author whose books are essentially trash but who seeks, through her connections with newspaper editors with whom she flirts outrageously, to have her books reviewed positively so that she can sell some of them to help with her income. Put simply, she does not desire to write good books, but books that are reputed to be good. She has a fairly worthless son named Felix who is technically a Viscount but has no property, has gambled away every penny his father left him, and is a good bet to burn through every penny his mother has as well. (The gambling that is the passion of all the young gentlemen in the novel is essentially the equivalent of the financial speculation—it’s all gambling and it’s all about money, or the lack of it). Not surprisingly, Felix has a seat on the board of directors for Melmotte’s railroad company, since he’s just the sort of young nobleman who can give Melmotte’s business a certain respectability while at the same time providing a complete dupe for Melmotte’s machinations. And oh yeah, Lady Carbury is constantly after Felix to woo Melmotte’s daughter and only child Marie, assumed to be the most eligible heiress in England. But if Melmotte is going to marry his daughter to a penniless British aristocrat, it’s going to be somebody of a higher rank than viscount.

As for Lady Carbury’s beautiful daughter Hetta, her mother has plans for her as well—to marry her off to her rich cousin Roger, who didn’t get the Carbury title but did get the Carbury property, which is quite lucrative. Roger is somewhat older than Hetta, but loves her sincerely. Hetta, though, is in love with Roger’s young friend and protégé Paul Montague. Montague, the original investor in the South Central Pacific and Mexican Railway, is another member of the board of directors, and the only one who actually will spend any time questioning Melmotte as to the details of the company—questions which Melmotte, of course, never answers directly. Paul, Roger, and Hetta are all rather sympathetic characters, in whom Trollope freely admitted he was not all that interested. More interesting, for him and probably us as readers, is Paul’s ex-fiancée Mrs. Winifred Hurtle, who has followed him back to London from San Francisco, and who has a past in which she is rumored to have shot a man in Oregon and to still have a living husband in Texas.

Without revealing any spoilers, let me try to consider this novel’s ultimate effect. The novel has generally been considered a melodrama, like those Victorian plays with exaggerated characters and sensational events designed to appeal to the emotions. But the characters here are hardly so exaggerated—we see plenty of their like in contemporary America. Alternatively, it might be viewed as a tragedy, for the fall of Melmotte is certainly sudden and from a great height, and is of his own making. But we can have little sympathy for him and can’t help but think he simply gets his just deserts, which is not how we’re supposed to feel about a tragic hero. Maybe in fact the book is essentially a comedy: It deals chiefly with folly and vice rather than pure evil, and ultimately most of the characters end up happy, with the chief blocking figure, Melmotte himself, eliminated from the new society that rises after he is out of the picture. Of course, that new society still contains a lot of vicious and foolish people, and doesn’t seem all that much reformed, so if we call this a comedy it’s definitely a dark one—a surprisingly relevant one. In his autobiography, Trollope said of this book:

“If dishonesty can live in a gorgeous palace with pictures on all its walls, and gems in all its cupboards, with marble and ivory in all its corners, and can give Apician dinners, and get into Parliament, and deal in millions, then dishonesty is not disgraceful, and the man dishonest after such a fashion is not a low scoundrel.”

Even 150 years on, we can still read this book and say yes, it really is about the way we live now.

Four Shakespeare’s for this one, Trollope’s masterpiece.

Judas and the Black Messiah
Scroll to top