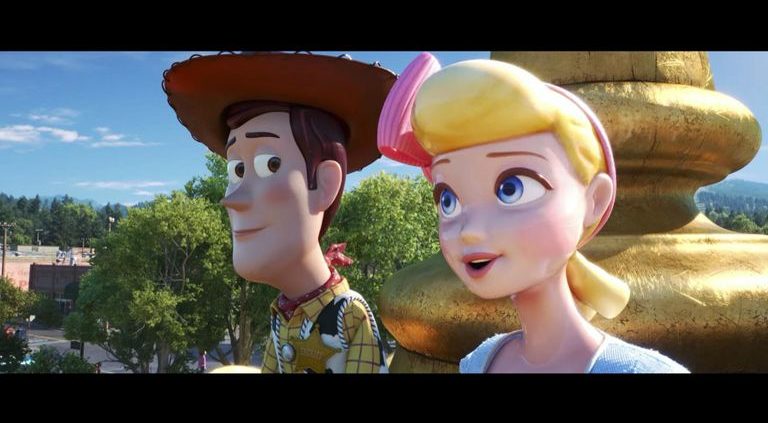 “There is but one truly serious philosophical problem, and that is suicide,” Albert Camus began his book The Myth of Sisyphus. “Judging whether life is or is not worth living amounts to answering the fundamental question of philosophy.” It’s not a quotation that often comes to mind while viewing a phenomenally popular animated film aimed chiefly at children and their families, particularly one whose protagonists are all inexplicably sentient and conscious toys. But it’s one that sprang unbidden into my mind as one of the new characters in this fourth (and almost certainly final) chapter of the Toy Story story persistently tries to hurl himself into the trash. “Forky,” a spork retrieved from a waste basket by the franchise’s eponymous Woody (Tom Hanks), is turned into a hand-made toy by Woody’s new owner, the kindergartener Bonnie (Madeleine McGraw of Ant-Man and the Wasp), who gives him red pipe-cleaner arms, broken popsicle stick feet, mismatched eyes and a silly-putty mouth, and proclaims Forky her favorite toy. Only Forky has no desire to be anybody’s toy, finds no meaning in such an existence, and repeatedly attempts to end it all by throwing himself back in the garbage, where he believes that, as “trash,” he belongs. Voiced by Tony Hale (of TV’s Veep and Arrested Development) Forky displays an existential crisis that is funny but at the same time profoundly meaningful, as Woody does his best to convince him that there is a meaning to Forky’s existence and that it involves his meaning something to Bonnie.

But this is just one of the provoking situations that will challenge the grown up children who attend this film. In another segment, a 1950s style talking doll (voiced by Christina Hendricks from TV’s Good Girls) named “Gabby Gabby” (a play, I suppose, on the “Chatty Cathy” so popular in my youth) sits alone and unloved in an antique store. Her world has no meaning, her existence no purpose, and she believes strongly that her empty existence is caused by the fact that she has no voice—her mechanical voice box is damaged and nothing but gibberish comes from her mouth. If she can somehow commandeer Woody’s perfectly intact voice box and use it herself, then, she feels, some child will love her, buy her, and give her life meaning. In another profound metaphor, first-time director Josh Cooley (Oscar-nominated writer of Inside Out) and co-writers Andrew Stanton (who worked on the original Toy Story and Toy Story 3) and Stephany Folsom (who worked on the Star Wars Resistance TV series) present the human condition: It is through language that we give our world meaning and that we establish meaningful relationships with others.

Or do we? It may be we are simply fooling ourselves. At one point in this film, Woody tells his pal Buzz Lightyear (Tim Allen) that sometimes, to know what is the right thing to do, he has to listen to his conscience, his “inner voice.” Buzz, who has never been the brightest bulb in the chandelier, understands “inner voice” to refer to his own voice box, which shouts out random tags, like “To infinity and beyond,” whenever he presses his button. For the rest of the film, he makes decisions based on his interpretation of whatever nonsense spews from his “inner voice.” So, upon reflection, is Buzz showing us that our actions are performed in response to our own attempts to articulate the meaning of the world, and that these articulations are simply random ideas that have no real connection to any preexisting significance in the perceived world? Or, to use the litany of futility used by the absurdists: The universe is meaningless. If the universe has a meaning, it cannot be known. If we can know the meaning of the universe, it cannot be expressed in language.

That would be a dire takeaway indeed from what passes for a children’s cartoon. But wait: We still haven’t considered the true hero of this film, and that is Bo Peep (Annie Potts of Ghostbusters and TV’s Young Sheldon). Bo Peep, Woody’s love interest in the first two Toy Story films, was summarily given away in Toy Story 3. But she reappears here with a vengeance. Given away by her original child-owner, discarded by her second, she had ended up in the same dead-end antique store as Gabby. But Bo Peep was not about to sit around in the limbo of childlessness, hoping for some young girl to come along and give her life meaning. She decided, radical as it may seem, that she did not need some child to belong to in order to give her life purpose. She escaped from the antique store and spends her time riding around in a skunk-mobile, a “lost toy” who embraces her independence. A toy, she reasons, can give meaning to her own life, independent of the need to cling to the painful cycle of a child’s approval or indifference. If, as Sartre said, “existence precedes essence,” if there is no meaning to our lives other than the meaning we give to them ourselves, then it is the most courageous of individuals who dictate the meaning of their own lives, without relying on others—children—to legitimize their own existence. Bo Peep is what toys (metaphorically human beings) become when they grow up.

Oh, I know what you’re thinking. If this is what Toy Story 4 is all about, how can I possibly take my 6-year-old to see it? Fear not! This movie is as beautifully animated as Pixar can make it, full of Randy Newman’s entertaining music (including Forky’s theme, the multi-leveled “I Can’t Let You Throw Yourself Away”), an abundance of humor, and the beloved characters we’ve come to know in the previous three movies in this franchise. It made $118 million domestically in its opening weekend—outdistancing its nearest competitor by more than $100 million. And on Rottentomatoes.com, it has a 95 percent audience-approval rating to go along with its 98 percent critics rating. The 6-year-olds are loving it.

The plot begins in typical Toy Story territory: A toy is feeling unloved. Woody’s new owner, Bonnie, much prefers to play with other toys, including cowgirl Jesse (Joan Cusack), while leaving Woody in the closet. He tries to take this in stride: Whatever pleases his child pleases him, because that’s why he exists. When Bonnie sets off to her orientation day at kindergarten, she is not allowed to bring a toy, but Woody, as usual, takes matters into his own hands, sneaks into Bonnie’s backpack, and when she sits alone in her kindergarten class, it’s Woody who tosses the plastic spork, popsicle sticks, and other detritus onto Bonnie’s desk to allow her to construct her own toy—the insecure Forky—and have a successful day. When Bonnie’s family go on a weeklong Winnebago vacation, Woody comes along in order to buoy up the ineffectual Forky, to make him worthy of Bonnie’s love.

The rest of the story includes many motifs familiar from previous Toy Story installments: Woody must go on a quest to rescue a missing toy; Buzz, Jesse, and others try to lend a hand; new toys are met, some of whom become allies—including Duke Caboom (a hilarious Keanu Reeves), a toy motorcycle stunt rider in the Evel Knievel mold, and two fluffy carnival prizes called Ducky and Bunny (voiced by Emmy-Award winning Key and Peele: Keegan-Michael Key of TV’s Friends from College and Jordan Peele, director and writer of Get Out!), who spend much of their time imagining alternate realities, but that’s another story; and some new characters become antagonists, including Gabby Gabby and her stooges, four eerily empty ventriloquist dummies (who, like her, lack the ability to talk because they have no human master). And of course there are reunions and tears at the end, as in all Toy Story movies. Do not worry, there is plenty here for children to love. And plenty for you to think about. Four Shakespeares for this classic in the making.