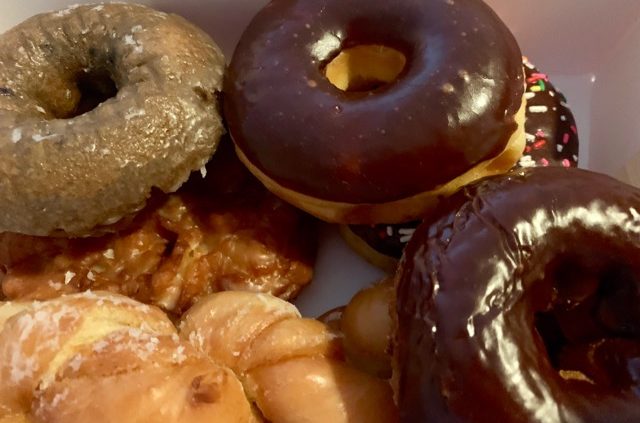 He Said: It was a Sunday morning and we’d been running ourselves ragged for the past couple of days and She Said reminded me we needed to review a restaurant yet this week. So that meant sometime today we needed to get out of the house and eat something, and I began to grumble. But wait, says She Said, near the top of our list of unreviewed Conway food establishments is a little doughnut shop on Harkrider, so “Sure,” I say, “why don’t you go get those doughnuts?” And she did.

She Said: I put on my new Athleta pants and a t-shirt and off I went to the cute little shop I’d noticed recently. Normally, I follow a 16-8 fasting regimen, in which I don’t eat between 7 p.m. and 11 a.m., but with all the busyness lately, I’d fallen off that a bit. I was hungry and it was time for fresh doughnuts, fasting be danged!

He Said: I have nothing to say about this, since I was actually walking a dog when the doughnuts were picked up.

She Said: The shop is bright and sunny, with a few tables and bar seating facing out of the large front windows. I would sit in here and nurse coffee and doughnuts, but for today, I whisked them right on home.

He Said:We got no drinks to go along with the doughnuts. I couldn’t even tell you whether they have drinks there at Conway Donuts—since, as I may have mentioned, I was not there.

She Said:Of course, they offer coffee, as well as soft drinks, but I was needing some of my strong, homemade espresso that day, so I skipped it, homing in on the main attraction!

He Said: She Said returned to the house with half-a-dozen doughnuts, and I trust that she got a reasonable variety, though I noticed that three of them were chocolate in some form or other, and I assumed those must be for me. I had one as a kind of pre-breakfast treat, one basically as lunch, and a third as dessert after dinner.

She Said: Here at Eat It, Conway! we spell it “doughnuts” and that’s that!

I can’t attest to the glaze, though I thought it was a chocolate glazed doughnut. For my side of the box, I chose a blueberry cake doughnut, a twist and an apple fritter, which I ate in that order, though unlike He Said, I didn’t spread mine out quite so much: I ate the blueberry right away, and then made another cup of espresso and sampled half of each other’s. I finished the fritter while I was making a much healthier supper (stir-fried veggie rice noodles with vinegar and salt tofu).

I thought the blueberry cake doughnut was very tasty. The consistency was dense without being too heavy, and it tasted fruity, although perhaps a bit too sweet. The twist was glazed, and it was rather large, so a half of one of these was about enough for a whole doughnut. It was sweet, and the consistency of the dough was light enough for a sweet, but dense enough to make me feel fed.

But the apple fritter was the real treat for me. I had half with my morning coffee and half later in the day, and every bite I took convinced me I would need to return to Conway Donuts for more of these little beauties. This treat had apple baked into the dough, which was flat and fried and glazed. My mother tried a bite, as she said her mother used to make something like this. She approved as well. Next time I go there, I won’t bother with the other things for me, and will just load up (and bulk up!) on apple fritters.

He Said: Hmmph. So that’s where the glaze went.

He Said: She Said put the box of doughnuts in front of me. That was pretty good service.

She Said: As I walked into the empty shop early on a Sunday morning, a man appeared from the back room and I got to work selecting treats as he got to work putting them in a pretty pink box. He was friendly and efficient.

What We Got and What We Paid: Four doughnuts, one twist and one apple fritter for $6.45.

Elapsed Time from Our Arrival to Food Arrival: 2 minutes from arrival at the door to getting back in my car. 2 minutes!

He Said: I’ve got to rate this one pretty average. I’ve had much better doughnuts in Conway. Some of them were even spelled right.

She Said: I’ve got to disagree with you on this one, Ruud: The apple fritter was worth the price of admission. I’ll be back for more of those for sure!

Is Conway Donuts good at what it’s good for? It may not be the best at doughnuts, but it may have changed my life with its apple fritters.