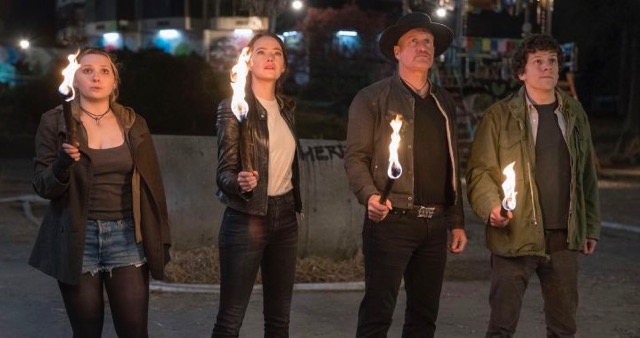 Has it really been ten years since the original Zombieland? I know time is supposed to move faster the older you get, but I’m thinking I must be about 159 by now, since it seems just yesterday that I saw pretty much this same movie, but all the interweb sites are telling me it was 2009. Since then, of course Emma Stone (who plays the world-weary cynic Wichita) has won an Academy Award for Best Actress for 2016’s La La Land. Woody Harrelson (who plays the over-the-top Redneck Tallahassee) has had two Oscar nominations (for 2009’s The Messenger and 2017’s Three Billboards Outside of Ebbing, Missouri), Jesse Eisenberg (who plays the nerdy but sincere Columbus) garnered his own Best Actor nomination for 2010’s The Social Network, and Abigail Breslin (who plays Arkansas’s own Little Rock), who already had an Oscar nomination for 2006’s Little Miss Sunshine, has been in more grown-up roles in movies like Ender’s Game and August: Osage County.I’m not completely sure why this sequel was necessary, other than the most compelling Hollywood reason: “The first one made a lot of money, so we need to do another one!” The other obvious question—why make a sequel ten years after the first film?—might be answered by the litany of more recent achievements just enumerated for the four principle actors: Maybe it took ten years to get them all to commit at the same time.

Or maybe the plethora of zombie-themed movies and TV shows exploding over the past ten years has glutted the market to the point where some Hollywood executives thought that another Zombieland would get lost in the shuffle. Or perhaps I should say the shamble. Even The Walking Dead seems to me to have jumped the shark, though it appears a season 11 and even a season 12 are planned. So if the zombie apocalypse is waning as an entertainment draw, it looks like it’s going to be a slow wane. And thus we have Zombieland: Double Tap.

Ruben Fleischer returns to direct the sequel. In the interim he’s directed Gangster Squad (where he worked again with Stone) and last year’s Venom (with Harrelson). Rhett Reese and Paul Wernick, who wrote the screenplay for the first Zombieland, return for this one, having written a couple of little things called Deadpool 1and 2 in the interim—so you can probably expect snarky in big doses. Added to the mix is David Callaham, veteran of three (count ‘em three) Expendables movies. So, mindless violent action taken care of.

There is some new blood in the cast as well. Yes, if ten years of The Walking Dead have taught us nothing else it’s that there are always some other people out there somewhere who have survived this long. And so we meet Nevada (Rosario Dawson, best known for TV’s Jane the Virgin) who runs an Elvis museum called the “Hound Dog Motel” near what used to be Graceland, and who you will wish had more screen time. There are also what amount to cameos from Albuquerque (Luke Wilson, last seen in this year’s The Goldfinch) and Flagstaff (Thomas Middleditch from TV’s Silicon Valley), who show up at Nevada’s place as bizarro Tallahassee and Columbus in what is essentially a sight gag that goes on too long. There is also a stereotyped guitar-playing pacifist hippie from Berkeley (Avan Jogia, who played Puck in the reviled 2017 film of A Midsummer Night’s Dream). Most memorable of all the newcomers is Madison (Zoey Deutch from TV’s The Politician), who is essentially a completely stereotyped dumb blonde-Valley girl who has survived all this time by hiding in a frozen custard freezer at the mall, and whom Tallahassee says is safe from zombies because they eat brains and she could provide them with nothing more than a snack. Nevertheless, Deutch manages to steal every scene she is in until, like the worldly-wise Wichita, we start to cut her a break.

The film begins as our four principals, now professionally adept at killing zombies, cut, slash, and shoot their way through a lot of zombie detritus to get to the moss, ivy and kudzu covered White House, where they have decided to live because, well, why not? In order to give this sequel some reason for being, a couple of conflicts are introduced during this White House sojourn: Columbus and Wichita have been sleeping together—presumably for about ten years now?—and now they can do it in the Lincoln Bedroom. But when Columbus pulls out the Hope Diamond (which he happened to find lying around in the White House) and proposes to her, Wichita can’t handle it and rebuffs him. Now, aside from the logical problems with the idea of being officially married at all in a post-Apocalyptic world where society itself no longer exists to sanction the marriage, and the practical problem of who on earth they would find to perform the ceremony, it’s still a sweet gesture, so why Wichita should freak out about the offer is a little hard to understand. She’s not ready to “settle down”?

Another conflict arises between Little Rock and Tallahassee: In this quasi-family that our four principals have formed, Tallahassee as the alpha male is indubitably in the position of pater familias, and as such he has begun to think of, and treat, Little Rock as a daughter—a daughter whom he feels he must protect from any unsavory connections she might make with any surviving males her own age that might turn up. Okay, again, it’s a world post-zombie-Apocalypse, so if she finds anybody at all she’s going to be pretty lucky. But he doesn’t see it that way. So the next morning, the women have split, leaving only a short note in Wichita’s hand declaring her own aversion to commitment and Little Rock’s annoyance at being treated like  child. And the women have taken Tallahassee’s “Beast”—his modified limousine—which he seems most upset about losing.

A month later, Columbus is still moping about losing Wichita when he and Tallahassee run into Madison at a shopping mall. They take her back to the White House, where, having been locked in a freezer for ten years, it takes her about five seconds to jump Columbus’s bones. Naturally, Wichita returns just at this point, to say that Little Rock has eloped with a guitar-playing hippie and they need to actually get the plot moving by going after her. And so off we go, chasing Little Rock to Graceland, where she and Berkeley apparently were heading. And oh yeah, one more important conflict is revealed as they start the chase: They run into a newly evolved super-zombie that takes a whole lot of shooting in the head to kill.

And so we’re off on the road, where Tallahassee has reason to believe they all will be received in Graceland. But when they arrive, they find the Beast but no Little Rock, and Tallahassee finds his dream girl in Nevada, but must leave her to continue the chase after his quasi-daughter. Eventually, as you might suspect, all conflicts are resolved after a highly episodic plot that ends with a trick pulled from an apparently irrelevant reverie about Tallahasse’s Native American ancestors.

In the end, the movie is intended as a lark, and that’s all it tries to be. It’s not going to change your life. One wonders, though, if there isn’t some kind of unholy connection between the casual graphic violence of a film like this, so much like a video game, and the general lack of empathy we observe today is a large segment of our society. We can’t give up our guns, the film argues, because we will need them against the onslaught of soulless enemies whom we will need to annihilate in bloody fashion. So are this film and those like it cause or symptom of that malaise? At the showing I attended, a mother sat in the row behind us with a 3-year-old and a 5-year-old, who watched the well-earned R-rated violence as casually as if it were a daily experience. Had there been nudity in the movie, I’m sure they’d never have been allowed to go—wouldn’t want to warp those little minds. Bodies are for blowing up, not for caressing. But perhaps I’m reacting too thoughtfully. As Chaucer said, one should not make earnest of game. Still, two Jacqueline Susanns for this one.