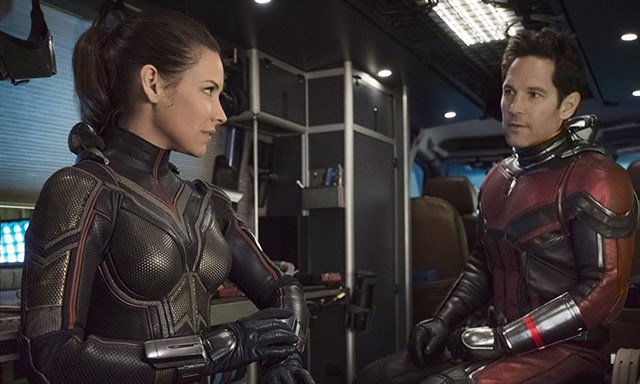 Ant-Man and the Wasp

If it bothered anyone that Paul Rudd’s Ant-Man was not among the 6,000 superhero characters involved in this spring’s Avengers: Infinity War, your concerns should be assuaged if you stay past the credits and watch the tail-end of Marvel’s current release, Ant-Man and the Wasp, wherein a connection is made to that earlier movie. But aside from that brief nod, the current film is so much lighter, more playful, and frankly more enjoyable than that previous over-bloated behemoth of a movie, it’s hard to believe they belong in the same universe. But of course, they do: The Marvel Cinematic Universe, to which all components must pay homage, including this, the 20th movie in this galaxy-encompassing franchise.

Like its predecessor, 2015’s original Ant-Man, this film is less a save-the-world mega-drama as it is a domestic family sit-com that involves, yes, a guy with a special suit that gives him unusual powers, but also involves several father-daughter type relationships that play off one another and that require characters to actually have personalities other than simply engaging in a little verbal sparring between set pieces of CGI action scenes. In this it’s less like the Avengersepics than it is those smaller Deadpoolflicks, only with less snark. Peyton Reed returns to direct this sequel to his first movie, and Paul Rudd (who I like to think of as “cousin Paul”) reprises his role as the diminutive crime-fighter and also contributes to the screenplay, as he did in the original. He cobbled the script together with Chris McKenna an Erik Sommers (who teamed up on Spider-Man: Homecoming), Andrew Barrer (Haunt) and Gabriel Ferrari (who produced Haunt)—it’s a wonder with such a posse that the story holds together at all, but it does, which is something of a miracle considering all of its working parts.

Of course, the film isn’t completely self-contained. It isMarvel after all. The movie opens with Scott Lang (aka Ant-Man), fitted with an ankle-bracelet and in his final days under house arrest, where he has been since the events of Captain America: Civil War, after which he was arrested for taking part in “the Cap’s” rebellion against Iron-Man and government oversight. His plea deal involved his retiring his Ant-Man suit and serving this sentence. At home, he has found innovative ways to amuse his daughter (the refreshingly noncloying Abby Ryder Fortson), which include learning to play the drums and to do magic, all under the scrutiny of his parole officer, Agent Woo (a delightful Randall Park), who’s particularly impressed by those magic tricks. Scott is also involved in developing a security business with his favoriteex-con buddy Luis (a hilarious Michael Pena, returning from the original film), intent on “going straight” after his brush with anti-superhero law.

Part of his plea bargain apparently also forbade any contact with the scientist Hank Pym (Michael Douglas), from whom he originally obtained his fantastic suit and size-shifting superpowers, or with Pym’s daughter Hope van Dyne (Evangeline Lilly), with whom he had a bit of a romantic fling in the previous film. But after having a bizarre dream in which he revisited the sub-atomic quantum realm he had explored in the previous movie and, strangely, seemed to channel another person’s thoughts, Scott gives his old partners a call. Turns out they’ve just tried to communicate with Pym’s long-lost wife Janet van Dyne (Michelle Pfeiffer), who in her secret role of “the Wasp” had gone sub-atomic herself some thirty years ago and has been trapped in the quantum realm ever since. Apparently Pym and Hope now have a chance to save Janet, and Scott’s dream, and his own experience in that subatomic wasteland, also convince them that he holds the key to finding and rescuing poor stranded Janet. But for some reason not completely clear to me (but perhaps it was to the five writers who came up with it) the rescue has to take place, like, right now. So they’ve got to spring Scott from his house arrest and send him back to quantumville to rescue Mom. We just have to pray that we can get all this done within the next 72 hours, because at that point the very suspicious Agent Woo will be popping back in to take Scott’s ankle bracelet off.

Pym and Hope have everything set up to send Scott to subatomic land in their very scientific lab, which they and shrink down into a briefcase-sized box when they need to go somewhere. They can also shrink their cars down to toy size so they don’t have to worry about parking. But they do need one more technological part for their quantum shrinker, which Hope attempts to purchase from a nefarious dealer in stolen high-tech equipment named Sonny Burch (Walton Goggins from DjangoUnchainedand The Hateful Eight). But Burch would rather steal herlab, and we quickly learn that Hope has donned her mom’s former secret identity as The Wasp—and thwarts Burch, at least temporarily. But he and his gang continue to harass our heroes as they battle the clock to send Scott on his mission.

And if that’s not enough, they find they have another rival trying to steal their technology: This one is a creepy hooded figure who keeps blurring in and out of focus and who goes by the nickname “Ghost.” This is Ava (Hanna John-Kamen from Ready Player One), who, because of some technological accident years before for which she blames Pym, has been left with a kind of molecular instability that gives her the ability to phase through matter but will shortly prove fatal. Aided by her own father-figure, an old partner and competitor of Pym’s, Dr. Bill Foster (Laurence Fishburne), Ava wants to get hold of Pym’s technology in the hope it can save her own life. It’s a pathetic story, and Ghost is the most sympathetic villain in all this summer’s myriad of superhero movies. You almost want to say, hell with it, let Janet stay in quantum-land, and save this poor girl. How selfish are you guys?

Well, OK, Ghost does get pretty violent, and just as willing to sacrifice everybody else for her own safety as they are to sacrifice hers, and even Foster says he won’t help her if she doesn’t settle down. But in the midst of what is mainly a fun romp of a film, Ghost proves to be a real downer. It’s almost like she thinks she’s in a different movie from everybody else.

Not that this really seems to be a flaw in the film. It’s more of a serious layer that lies under the summer fun-time vibe of the movie in general. To tell you any more would be to engage in spoilers, and there’s no reason for me to do that here. Let me just say that this is an enjoyable movie: Cousin Paul is incredibly personable and charming, and he is at his best in doing that here. Lilly is more than a match for him as the Wasp, and as the two of them engage in quick and clever chase scenes and battles with the baddies, their ability to shrink and swell in size not only themselves but their cars and office buildings as well, is far more visually entertaining than the usual let’s-knock-every-building-we-see-to-the ground-and-cause-a-billion-dollars-worth-of-damage-just-because-we-can philosophy of the run-of-the-mill superhero movie. Add to that the fact that Pfeifer and Fishburne are just so dang delightful to see, and that Pena is once more a riot in his supporting role, and you’ve got one of the summer’s more entertaining movies. Three Tennysons for this one.

Shakespeare’s Sonnet #30: “When to the sessions of sweet silent...
Scroll to top