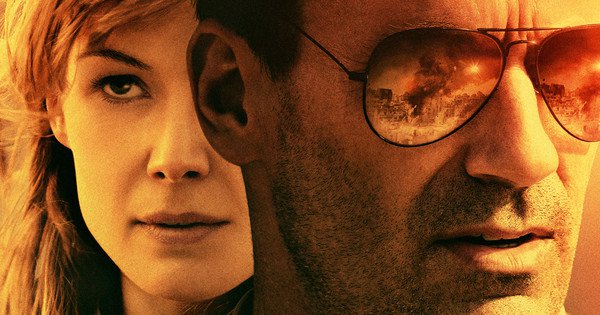 Let’s deal first with the elephant in the room: Brad Anderson’s new film Beirut has received a good deal of negative advance publicity, including a condemnation from the American-Arab Anti-Discrimination Committee, which called the portrayal of Arabs in the film “racist” and the movie’s depiction of Middle Eastern politics “simplistic.” They also labeled the film’s protagonist Mason Skiles (Jon Hamm of TVs Mad Men) a stereotyped “white savior” figure. The film has also faced criticism for being filmed in Morocco rather than Beirut itself, for using no ethnic Lebanese actors and for failing to portray the Lebanese as fully rounded or complex characters. The film is being boycotted in Lebanon itself. If one looks at the review aggregator Rotten Tomatoes.com, one sees that the critical response to the film has been generally favorable (78 percent), but that audience responses have been less than stellar (53 percent), with many of the negative audience evaluations influenced by the negative publicity (it seems clear that a number of the negative reviews were from people who did not actually see the film).

The fact is that much of the criticism of the film derived from its trailer. In particular the trailer’s tagline—“2,000 years of revenge, vendetta, murder…welcome to Beirut”—was decried as an offensive and inaccurate representation of the nation’s history. The film itself, while it can hardly be called a sensitive and nuanced record of Lebanese history and politics or a complex examination of the Lebanese people, is less guilty of these offenses than the trailer may suggest. And some of the complaints about the film concern things that were likely out of director Anderson’s control. Shooting such a film in Beirut itself, for example, would be difficult for a story set in 1982. The modern stylish and sleek city of Beirut (“the Paris of the Middle East”) would provide an incongruous background for a film set in the war-torn city of 36 years ago. Furthermore, Beirut was filmed with a relatively small budget, and, as the film’s producers argued, it was much easier—and cheaper—to get insurance to film in Morocco than to film in Lebanon.

As for the charge that the film employs the hackneyed “white savior” motif—a story that focuses on a white hero who saves people of color from some danger or difficulty (a la, say, Lawrence of Arabia), nothing could be further from the truth. Hamm’s character is no Lawrence, nor is he a Robert Gould Shaw in Glory or a John Quincy Adams in Amistad. He’s not the heroic Indiana Jones in Temple of Doom or the principled Atticus Finch in To Kill a Mockingbird. He’s a sad drunk bemoaning his murdered wife who doesn’t ever want to see Beirut again, but he has some negotiating skills that may help to rescue another white American from a particular group of terrorists. He’s not there to save anybody of color. And he doesn’t.

The criticisms of the casting may be less easy to dodge. It is true, for example, that Leïla Bekhti, who plays Skiles’ Lebanese wife Nadia, is a French actress of Algerian descent; Idir Chender, who plays Skiles’ chief antagonist Karim Abou Rajal (a Palestinian, by the way, not a Lebanese) is also French, with a vaguely Islamic name and appearance. None of the other characters are played by Lebanese actors, or Palestinians either for that matter. They were mainly Moroccan. It was probably easier and cheaper, again, to cast actors who lived in or near Tangiers, where the film was headquartered, but it is hard to believe that a few Lebanese actors couldn’t have been secured for the major parts in the film. After all, the American characters weren’t played by French actors, were they?

Such considerations aside, the question I want to address here is whether the film succeeds at what it is trying to do. It is not a documentary or a sociological study. It is intended to be a political thriller in the John Le Carre style, so the question is, as my wife likes to say, is it good at what it’s good for?

The screenplay for Beirut was actually written back in 1991. Tony Gilroy, Oscar-nominated writer of Michael Clayton and the four Bourne films, wrote the script before his first film, The Cutting Edge, was released, but was not able to find anyone to make the movie at that time. As co-producer, he’s finally brought it to the screen with Brad Anderson (The Machinist) as director. In a way the film seems a bit of a throwback to films of that era (think The Finest Hour, Courage Under Fire, Three Kings—or even Not Without My Daughter) and thus perhaps shows little of the sensitivity Hollywood is beginning to become conscious of. But when it comes down to it, this is a film about Americans in Beirut, more specifically about hidden agendas of particular American politicians and operatives in Beirut, at a particular point in history: just prior to the Israeli invasion of Lebanon in June 1982 and the subsequent terrorist attack on the U.S. marine barracks in Beirut in April 1983.

This story actually begins in the title city in 1972, when Skiles (Hamm) is a U.S. diplomat hosting a party for visiting American dignitaries, including a congressman. As the film opens he is trying to describe in a nutshell the complexities of politics in the city—the conflicting interests of Lebanese Muslims, Lebanese Christians, Palestinian refugees and Jews. He and Nadia (Bekhti) have taken in a 13-year old Palestinian orphan named Karim (Yoav Sadian Rosenberg) whom they are talking about adopting. The party is interrupted by Skiles’ friend Cal Riley (Mark Pellegrino from TV’s Lost and Being Human), a CIA agent who tells Skiles that Karim needs to come in for questioning: It turns out his older brother Abu Rajal was involved in the recent murders of Israeli athletes at the Munich Olympics. While Skiles objects that Karim is “one of the family,” the party is plunged into chaos when disguised terrorists invade the home, Karim is abducted and Nadia, held by one of the gunmen, is caught in the gunfire when Cal attempts to rescue her.

Ten years later, Skiles is drinking his way through Boston, where he is using his diplomatic skills to mediate labor disputes and trying to forget what happened to his family a decade earlier. Out of nowhere, a summons comes to him from the State Department: It seems his talents are needed back in Beirut (“the last place in the world I want to go”), where his old friend Cal has been seized by some splinter militant group that is demanding Skiles and only Skiles to negotiate Cal’s release.

At the embassy in Beirut, Skiles must maneuver the conflicting agendas of three rival State Department and CIA figures: Gaines (Dean Norris of TV’s Scandal), Ruzak (Shea Whigham of TV’s Boardwalk Empire and Fargo), and Ambassador Shalen (Larry Pine of TV’s House of Cards), all of whom seem far more concerned about the secrets Cal might be forced to reveal and the possible reaction from Israel than with getting Cal back alive. Only cultural attaché Sandy Crowder (Rosamund Pyke of Gone Girl) seems to have Cal’s best interests at heart. She and Skiles don’t get along at first, but end up, predictably, as allies in this mess.

To say any more would need a lot of spoiler alerts, but that point about predictability is a significant one. Much of this film is predictable—it seems like we’ve seen this or something like it fairly often in other films. There is one surprise at the end of the movie, but even that might have been foreseen by cagey viewers familiar with history. The film, while not “based on a true story,” does suggest possible reasons for the Israeli invasion and the Marine barracks bombing, footage of which we see as the credits begin to roll. The best thing about the film is the performances of Hamm and Pyke (sounds a little like a Surf ‘n Turf dinner). He proves that he can carry a feature film just as smoothly as he carried a TV series for years. This is certainly Hamm’s best work on the big screen. And Pyke is as impressive as ever, though her role is certainly second fiddle to Hamm’s.

But it is still true that the film could have been more culturally sensitive. It also might have been less predictable. To fans of Tony Gilroy, it is interesting to see as an early work, a precursor of the more impressive Bourne films and the brilliant Michael Clayton (also about a negotiator). All things considered I’ll give this one two Jacqueline Susanns and half a Tennyson.