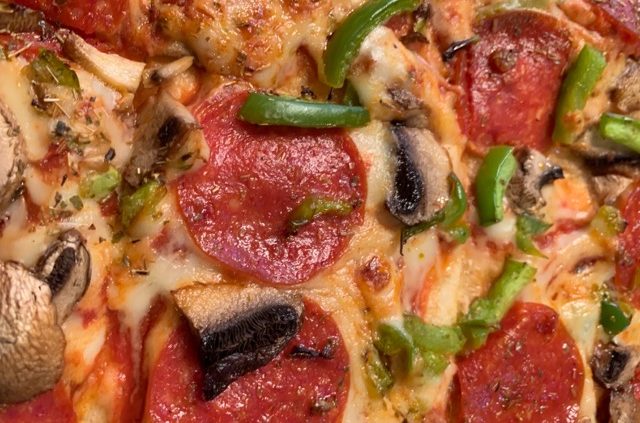 He Said: She Said was having a very busy week at her day job, which was keeping her up till late at night, and she thought it would save time if we ordered a pizza this week rather than go out. So I said sure, and turns out she was going to drop off some dry cleaning and would be going right by a Domino’s Pizza place, which we have not reviewed, and said she’d even pick it up (the pizza I mean). So as you see, I had even less than usual to do with the arranging of this week’s story.

Founded in 1960, the company has more than 15,000 locations in 85 countries. This is fewer stores than its greatest competitor, but Domino’s is the largest pizza chain in the world based on global retail sales. Eat your heart out, Pizza Hut! There are two Domino’s locations in Conway, and we went to the one on Salem for our pizza pickup today.

She Said: And, I had a secret interest in Domino’s this week: One of my favorite podcasts, Reply All, had an episode recently on a strange phenomenon in which someone named Adam Pisces orders a Diet Coke online from Domino’s outlets all over the country, but never picks it up, so PJ and Alex were trying to figure out what in the Sam Hill was going on… and every time they said “Domino’s,” I thought “PIZZA,” so, that was that.

He Said: I can’t say a thing about this since I didn’t set foot in the place. But She Said can tell you all about it.

She Said: Well, when you order online from the Salem Road Domino’s, you can pick up your order at the drive-through, so I didn’t set foot in the place, either, but since I love my car and the drive-through attendant was friendly, I will give thumbs up to the ambience!

He Said: We did not get any drinks to go. I can’t even tell you whether they have Coke or Pepsi products. Wait, yes I can, I can look on their online menu. Looks like they have Coke products, but not a large variety. I suppose I would have had a Coke if I had been ordering something. Which I wasn’t.

She Said:I should have pulled an Adam Pisces and ordered a Diet Coke with my pizza, but I didn’t.

He Said: OK, they have a particular crust here called “crunchy thin,” which let me assure you is the kind of crust that God intended when he invented pizza. I note that Domino’s is headquartered in Ann Arbor, Michigan, and it strikes me that the archetypal pizza of my memory, as formed in my Wisconsin childhood, must have been in the air when Domino’s developed this crust. Not only that, but they cut the pizza into squares, which is how actual pizza is supposed to be cut—not in these pie pieces you get from other brands. Yes, this is pizza as I remember it. We had pepperoni, mushrooms and green peppers on this heavenly crust, and it had the perfect blend of Italian spices that turned it into manna in the wilderness.

Yes, this was my favorite pizza in town. I know I should throw my weight behind newer, smaller, more independent, more organic pizza places, rather than go with the corporate giant. It’s like rooting for the Yankees or, worse yet, the New England Patriots. But I can’t help it, folks: This was my kind of pizza.

Now I know that pizza is not especially friendly fat-wise. Looking at the nutrition guide online for Domino’s, I believe there were about 74 grams of fat in this pizza, which was not too bad—most of that was from the cheese and pepperoni, of course. Of that, I probably had 50 grams, considering what I ate compared with what She Said ate. I admit I went overboard. But if I don’t eat anything else the rest of the day, I can probably cajole my pancreas into not reacting too badly. And anyway, it was probably worth it.

She Said: Yes, when I opened that box and saw the pizza cut into the squares of my husband’s childhood, I knew there would be swooning, and when I took a bite and heard the crack of that crisp crust, I knew we had found Racine pizza in Conway, from Domino’s of all places. And, just like He Said, I loved it. The sauce was well seasoned, the toppings were tasty, but most importantly, the crust was just right. There’s nothing more to write…

He Said: I had great service, personally. She Said came in the door carrying a box and said, “Pizza’s here!” And I didn’t even have to tip her!

She Said: Haha! The online interface was easy to use, though I didn’t see how to make the pizza more customized by halves, such as green peppers on only half, which I would have liked. But otherwise it was very easy to use.

What We Got and What We Paid: I had a coupon from Honey.com, so I got what might have been an $18 pizza (a 14-inch pepperoni pizza with green peppers and mushrooms) for $11.10.

Elapsed Time from Our Arrival to Food Arrival: I ordered it online from eastern Conway, and by the time I arrived at the drive-through window about 13 minutes later, it was ready.

He Said: I need to have this crust again, though maybe I’ll go with a small size and purely vegetarian toppings.

She Said: Yes, this crispy-cracker crust was delicious and hard to find in these parts. We’ll be ordering Domino’s again!

Is Domino’s’s Good At What It’s Good For? If you’re looking for a super-thin-crust pizza, then yes indeed!