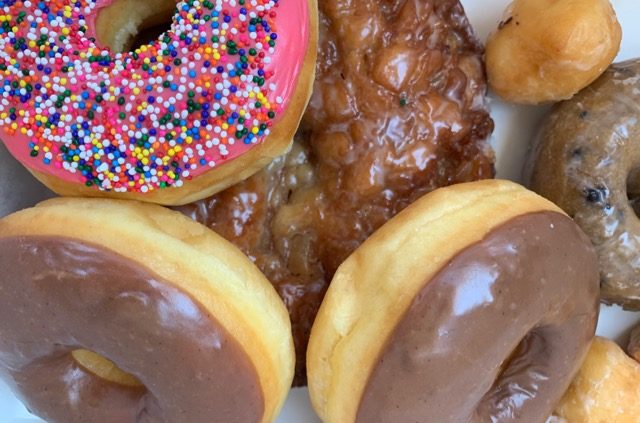 She Said:I came down with a cold that He Said so generously shared with me, so I was free eating and not exercising. This gave me the motivation and opportunity to add doughnuts to my morning last week, so I looked on the list to see where we had not yet visited and drove down to Dave Ward to this doughnut shop I hadn’t even known existed.

He Said: My own cold having not yet receded, I was more than happy to let She Said go get doughnuts. Mmmm…doughnuts….

She Said: It’s very similar to other Conway doughnut purveyors, with a small display case and a counter and the menu and prices on an overhead board. It’s bright and cheery, but nothing special.

He Said: Wasn’t there. Hence, have no opinion.

She Said: In my sinus-headache induced haze, I didn’t notice what they offered. I was here for fatty carbs, and that is what I procured.

She Said: I know I’m always charged to get CHOCOLATE for He Said, so I got two chocolate glazed doughnuts. I also selected a doughnut with pink frosting and sprinkles, an apple fritter and a blueberry cake doughnut. He Said claimed the chocolate and the sprinkles, so I focused my eating efforts on the fritter and the blueberry doughnut. I ate half of each when I got home and saved the rest for comfort food later. The apple fritter was very satisfying, sweet fried dough around chunks of flavorful fruit made it my favorite. The blueberry cake doughnut was also fruity, though a bit sweet.

He Said: That was no chocolate glazed doughnut. It was a chocolate iced yeast doughnut. The pink sprinkled doughnut was also a yeast doughnut (as opposed to cake, like She Said’s blueberry). The doughnuts were fine—very typical frosted yeast doughnuts, with nothing particularly remarkable about either the icing or the doughnut. They were both sweet enough to let you know you’ve had a doughnut, but nothing special registered for me in either the frosting or the consistency of the doughnut itself that would make me seek these doughnuts out in particular, the way I would, say, Ed’s or Krispy Kreme. As my daughter so eloquently remarked last week, “Meh.”

She Said: The service was veryperfunctory. This might be more appealing at the drive-through, which Fresh Donuts also offers. She did throw in some doughnut holes gratis, so that was nice.

He Said: Wasn’t there. Couldn’t say.

What We Got and What We Paid: Four doughnuts and one apple fritter for $3.32.

Elapsed Time from Our Arrival to Food Arrival: 3 minutes.

She Said: The doughnuts were fine, the service wasn’t memorable, and this is a little out of our way, so we’ll probably stick with Love’s and Ed’s when we want doughnuts.

He Said: If I was dying for a doughnut and was driving by, I might stop here for one. As a doughnut destination, though, I probably wouldn’t rank this one highly.

Is Fresh Donuts good at what it’s good for? Sure, especially if you like apple fritters and fast, perfunctory service.