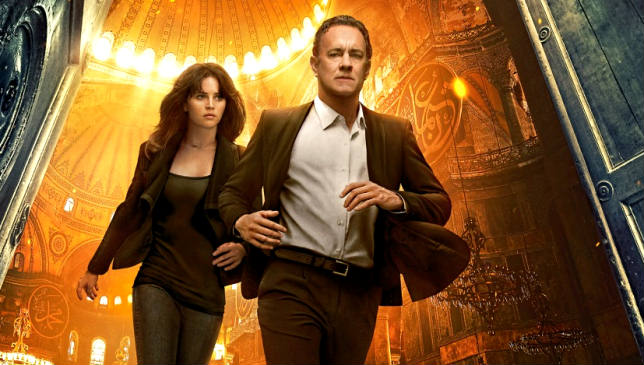 I did read The Da Vinci Code, Dan Brown’s first Robert Langdon novel, the runaway best-seller about Catholic conspiracies and historical puzzles interspersed with Wikipedia-level art history lessons. I couldn’t figure out why it was such a huge success. It was really not very well written—it was full of cliches, had a very predictable plot, and pretty one-dimensional characters, and was full of things that really didn’t make much sense but were included blatantly for exposition or to further the plot (Langdon had to explain to his female sidekick Sophie Neveu—a professional cryptologist—how a simple code worked). Needless to say, I haven’t read any of his other novels, but I have seen the movies, because, well, Tom Hanks. But let’s just say that what we’ve got with the latest Dan Brown movie directed by Ron Howard is not the Tom Hanks of Saving Private Ryan, Castaway, Forrest Gump, or Philadelphia, but something more akin to the Hanks of The ‘Burbs, The Money Pit, or Joe vs. the Volcano.

I really needed to see this movie because the trailers made it appear that Brown had turned Dante’s Inferno into some kind of cryptograph (“Dante’s Inferno isn’t fiction, it’s prophecy,” says Hanks-as-Langdon in the trailer), but that simply isn’t there in the film. What is there is just about as absurd, though. Part of the problem is simply wrong information. At one point, it is implied that Dante wrote in the fifteenth century. He died (and completed his Divine Comedy) in 1321. There are repeated references in the film to the “Black Plague,” which is not a thing. There was, of course, the Bubonic Plague, the first iteration of which in 1347 was popularly known as the “Black Death.” Calling it the “Black Plague” is, simply put, a demonstration of ignorance, or else laziness in research. More importantly, the film seems to suggest that somehow Dante’s vision of Hell in the Inferno was in some way inspired by the plague. But of course, as I’ve just told you, that would be impossible, since the plague did not appear until 26 years after Dante’s death.

These kinds of details are not things that will be noticed by most viewers. The part of it they will notice, though, is the fuzziness about exactly how Dante’s Inferno is related to the plague, and what that has to do with the rest of the plot. Though the plot is, from the beginning, deliberately fuzzy: Langdon lies in a hospital room, suffering through hallucinatory visions of people walking with their heads on backwards, or blood flowing in the streets, or people walking in flames. These, of course, are some of the punishments from the Inferno. But why should they be in Langdon’s mind? When he wakes up, he can’t remember anything from the past two days, and his doctor, Sienna Brooks (Felicity Jones of The Theory of Everything) explains that he is suffering from a head wound, which explains the amnesia. When Langdon looks out the window and realizes he is in Florence, he is completely confused. But when a Terminator-like woman disguised as an Italian police officer comes into the hospital to hunt him down, Langdon must flee—accompanied, of course, by his doctor (why not?). Now Langdon needs to start figuring things out.

Back in his hotel with his beautiful young British doctor who for some reason seems to be practicing medicine in Florence, Langdon finds a laser pointer in his jacket that projects an image of Sandro Botticelli’s Abyss of Hell, a map of the Inferno modeled on Dante’s poem.  Langdon notices that the levels are out of order. In addition, there are words hidden in some of the images, spelling out an elaborate clue. A clue to what we’re not completely sure yet, but all seems to be connected to the suicide in Florence of a biotech billionaire named Bertrand Zobrist (Ben Foster of Hell or High Water). Zobrist had been known for a campaign of dire predictions concerning the overpopulation of the human species, warning that humans were potentially facing extinction because of their overtaxing the planet’s resources. Accordingly, Zobrist apparently developed a virus that, like the Black Death itself, would kill half of the human population. Zobrist believed so strongly in his vision that he killed himself rather than allow his plan for “thinning the herd” to be thwarted. What Zobrist apparently has done is left a series of clues for his closest devotee to follow in order to find the virus and release it into the world. Those clues are inspired by Dante’s text to begin with, and lead Langdon and new female sidekick, the young Dr. Brooks, on a scavenger hunt. This takes them around Florence, looking for Dante’s death mask, on which Zobrist has written another clue that sends them running to Venice and then to Istanbul.

And they aren’t running alone. Everybody seems to think that Langston knows, or remembers, more than he does. So two different and apparently rival groups from the World Health Organization are chasing him—one led by an old flame of Langdon’s named Elizabeth Sinskey (Sidse Babbet Knudsen, currently being seen T.V.’s Westworld), the other by the earnest Christoph Bouchard (Omar Sy of Jurassic World)—and Langdon has to figure out which, if either, to trust. At the same time, just to keep things confusing, there is a shadowy security firm of some kind chasing Langdon, headed by a playful and witty Irrfan Khan (Life of Pi) whose memorable character is beyond question the best thing in this movie.

It’s hard to say what the worst thing in the movie is. There are just too many things to choose from. All that running is one of those things: Hanks and Jones run so much and so often that I actually fell asleep at one point and didn’t miss a thing except a little more running. There might have been less running and more substance, and I suppose that suggests that David Koepp’s screenplay is a candidate for the worst thing about the movie. This can’t be blamed on Brown: it’s Brown’s geeky explanations of the historical and artistic clues to his overly-wrought puzzles that seem to be what his fans love. But Koepp’s script eliminates much of that kind of thing and replaces it with, well, running. And the script also apparently changes the ending of Brown’s novel in a way that, as I understand it (not having read the book), will not make fans of the book particularly happy.

The title of the story puts Dante at the center of the film’s world. But the association of Dante with plague, and the implication that he was somehow obsessed with the horrors of a plague-like world in creating his version of Hell, is certainly a complete misreading of his text, and ignores the fact that Inferno is only the first part of The Divine Comedy, a story that ends in heaven and is at heart a celebration of the grace and goodness of God.

But my personal vote for worst thing about this movie is the absolute absurdity of some of the plot elements (and these, I’m afraid, probably are attributable to Brown): Why on earth would Zobrist have set up this elaborate puzzle to lead his prime disciple to the pandemic virus, instead of just, I don’t know, telling that person where it was? And what about that Dante death mask? How did Zobrist get the message on the back of the mask? Did he steal it, write the message on it, and then put it back without anybody in the Pallazzo Vecchio realizing that the mask was gone? For that matter, why are Langdon and his followers able to run around the great landmarks of Europe without running into any police, or even any of the thousands of tourists that would be there? Okay, I admit that last one is probably just me refusing to suspend my disbelief, but there are simply too many implausibilities in this plot.

I will admit that as a travelogue, the movie is interesting, giving us some excellent background shots of the Duomo and Baptistry of Florence, San Marco’s Cathedral in Venice, and the Hagia Sophia in Istanbul. But those shots plus Irrfan Khan are not enough to save this film. It’s also refreshing to see a protagonist who wins out in the end by using his brains instead of blowing people away with a gun or beating the sense out of them with his mad hand-to-hand combat skills. So I will give this one two Jacqueline Susanns. And that’s a gift.