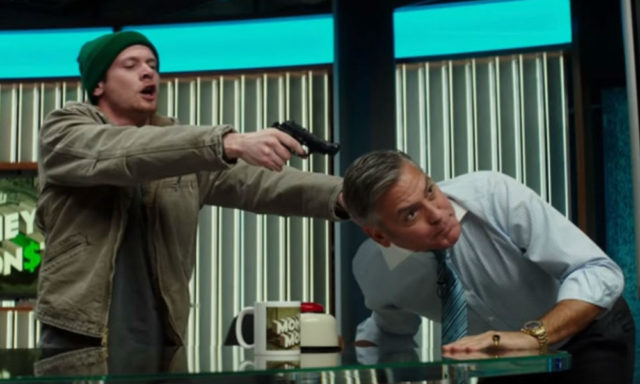 Jodie Foster last directed a film five years ago, when she tried to save buddy Mel Gibson’s sagging career with the ill-conceived and poorly received The Beaver in 2011. Prior to that, she hadn’t directed any films since the early- to mid-90s, when she had some success with Little Man Tate and Home for the Holidays. She has kept her hand in, directing a few episodes for TV’s Orange is the New Black and one episode of House of Cards. But given this track record it seems safe to say that she would not have directed this film, Money Monster, and backed it with the combined star power of George Clooney and Julia Roberts, unless it was something she really cared about.

That something, presumably, is the sort of economic malfeasance engaged in by Wall Street tycoons who, without legal sanction or moral scruple, manipulate the global economy for their own personal gain while the average investor, or consumer, loses everything. The plot is the embodiment of the kind of discontent with the global economy that has been registering with voters this entire presidential season, represented here in a single fictional company, Ibis Clear Capital, and its fictional CEO, Walt Camby (Dominic West, best known from TV’s The Wire).

The plot begins fairly simply, and is not much of a surprise since we already know what’s going to happen if we’ve seen any of the previews. Clooney’s character, television personality Lee Gates (a smug, smarmy, egotistical financial TV “news” host in the vein of CNBC’s Jim Cramer), comes in to begin his show along with his long-time director Patty Fenn (Roberts’ character), who clearly has spent her career keeping the loose cannon that is Gates’s mouth in check. Gates’ financial “news” show is a showcase for his cocky, clowning, macho personality, complete with stock recommendations that he goads viewers into having the “balls” to invest in. He begins today’s show by making excuses for a disastrous 800 million-dollar plunge in value by Ibis, a company he had recommended as “safer than your bank account,” blaming the disaster on a “computer glitch” and brazening it out. Strangely, the company’s CEO Camby, supposed to be available for an interview on the show, is missing in action.

Things take an unforeseen turn (unless you’ve seen the trailer) when a disgruntled investor Kyle Budwell (played by Jack O’Connell, last seen in last year’s ambitious but disjointed Unbroken), comes onstage with a gun, forces Gates to don a suicide vest, and threatens to blow up the entire set live on television unless he gets some real answers as to why he has just lost his entire life’s savings after investing it in Ibis, Gates’s “sure thing.” He wants answers, and he intends to get them—for himself and for every other small investor wiped out by the devalued stock.

The story, written by Jamie Linden (We Are Marshall), Alan DiFiore (TV’s Grimm), and Jim Kouf (Rush Hour), is in fact loosely based on the real “Mad Money” host Cramer’s woes after his part in the 2008 financial scandal, during which he aggressively promoted Bear Sterns stock just days before the company’s collapse, and was humiliatingly called out in a subsequent appearance on The Daily Show when Jon Stewart characterized him as “selling snake oil as vitamin tonic.”  Stewart, of course, did not have a gun. Money Monster’s story enfolds in real time as Clooney tries to keep Kyle from killing him, Roberts has all of her forces engaged in trying to track down the truth of what happened to Ibis, the police try to figure out how to defuse the situation—one option being actually shooting Clooney (yes, in front of a live TV audience that by now is international), and Ibis spokeswoman Diane Lester (Caitriona Balfe) tries to stick to her talking points in the midst of one exposed lie after another while the credibility of her story sinks more and more into the realm of the ludicrous.

So it seems Foster felt strongly about the corporate greed and guilt that plunged the world economy into its worst state since the Great Depression. And the film does present the “terrorist” Kyle in a sympathetic light throughout. But this is no Dog Day Afternoon, though it may want to be. Actually, that is the real problem with this film: In the end, I’m not sure what exactly Foster wanted it to be, for there is an inconsistent tone that confuses our responses as an audience, and there are unrealistic plot twists that strain the movie’s credibility even as the film poses as something ripped from today’s headlines.

Case in point: there is hapless producer (Christopher Denham) who is put in several absurd situations and becomes the butt of a couple of running jokes in the film, presumably as a kind of comic relief, but the humor falls flat and seems grotesquely out of place. Further, as the villain of the piece, West is given nothing to work with: we don’t really know his motivation beyond simple greed, and we don’t see that he has any actual remorse. He is simply a personification of avarice.

As a personification, CEO Camby may actually work if we consider Money Monster to be a kind of modern day morality play: Clooney, as the “Everyman” figure, is seduced by the greed incarnate represented by Wall Street and its evil representative, and essentially becomes their puppet, using his fake news show to simply promote corporate talking points. While on the other side, Kyle represents the good angel, or at least what Lincoln called the “better angels” of his nature, the conscience that ultimately sways him as he comes to see the human side of the economic chaos Gates has helped to promote. Looking at the film this way may explain the glaring flaw my wife noted about the movie: “There’s no way that a Narcissist like that [i.e., Gates] would ever suddenly demonstrate such insightful self-awareness.”

Characterization in general is one of the flaws with the film. Clooney does the best with what he’s given, but outside the morality play scenario he seems too shallow to suddenly “get it.” Roberts has it even worse—she’s given almost nothing to do except react with concerned looks to the bizarre events unfolding around her, and to bark orders at her virtually faceless underlings. There are hints of an untapped relationship between her and Gates, but it seemed that Foster was counting on a kind of natural chemistry between the two stars, and in the few places where such hints occur, they seem artificially inserted into the tense main plot. Kyle is really the only character who is significantly complex, and it is with him, not with Clooney, that the audience feels empathy.

The biggest misstep in the film occurs when the hostage situation leaves the studio and takes to the streets of Manhattan, followed by half of New York’s police department and surrounded by curious New Yorkers as if they are on a parade route. That was the point where the movie jumped the shark. If Foster wanted to make a serious indictment of corporate skullduggery, this movie has not really succeeded. Aside from becoming too over-the-top to be taken seriously, it succeeds only in presenting the fall of a single greedy executive, too extreme to be taken as a representative of the entire profession. Two Jaqueline Susanns and half a Tennyson for this one.