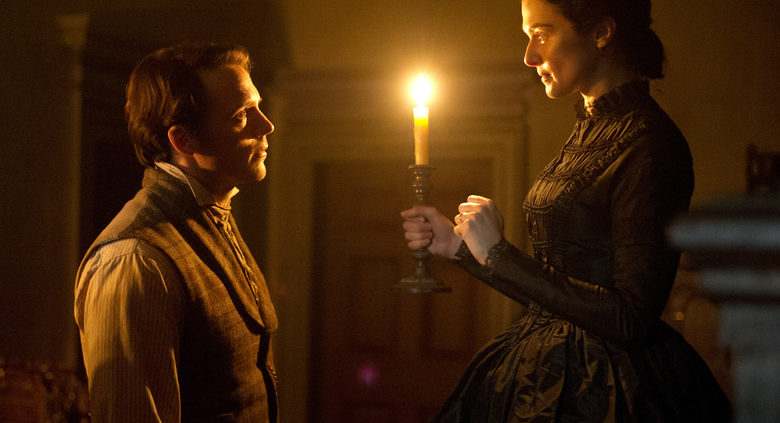 Roger Michell, director and writer of the screenplay for My Cousin Rachel, adapted from Daphne du Maurier’s novel, once said that Du Maurier “lights her scenes like Caraveggio and writes them like Hitchock.” Michell, of course, alludes to Hitchcock’s Hollywood debut, the Oscar winning film adaptation of du Maurier’s Rebecca (1940). The lesser-known fact is that Hitchcock’s eerie late-career thriller The Birds (1963) was also adapted from a du Maurier short story. There was something in the brooding, melancholy psychological Gothic melodramas du Maurier specialized in that found a kindred spirit in the director famous as the master of suspense.

My Cousin Rachel, a historical novel more reminiscent of Wuthering Heights than of Psycho, was previously filmed in 1952, unfortunately directed not by Hitchcock but by journeyman Twentieth Century Fox director Henry Koster, who had recently directed The Bishop’s Wife, The Inspector General, and Harvey (and would go on to helm The Robe, Flower Drum Song, and The Singing Nun). Koster’s adaptation of the book plays down the darker elements and plays up the romance between stars Richard Burton and Olivia de Haviland, to the extent that du Maurier was dissatisfied with the project. Still, the film garnered four Academy Award nominations, including one for Burton as the story’s unreliable narrator Philip Ashley—a character in every scene of the movie but nominated, by the twisted logic of Hollywood, for Supporting Actor; it was the first of Burton’s seven unsuccessful Oscar nominations, though he did garner a Golden Globe for most promising newcomer for the film.

The current film, if not exactly Hitchcockian, might actually be called Caraveggian: several of the pivotal scenes of the movie Michell films in candlelight, creating the dramatic use of contrasting light and shadows in a way reminiscent of Caraveggio’s chiaroscuro technique. And Michell thus seems more concerned with creating the brooding mood of a melancholy Wuthering Heights than the air of Hitchcockian suspense. Thus what we get is a kind of film seldom seen these days: one in which most of the action is internal. There are those who would probably find My Cousin Rachel slow moving, despite its rather snappy 106-minute running time, and for those moviegoers, all I can say is there is a lot of summer-blockbuster-type action in The Mummy—premiering this week on about 850,000 screens to a 17 percent Rotten Tomatoes approval rating—so if all you want is action, you can go there instead. Rachel is in limited release, and you’ll only find it on one screen in central Arkansas at Riverdale.

Considering the situation just described, it’s interesting to note the ironic twist that the popular and well-received 1999 version of The Mummy, which the current iteration seeks to reboot, starred Rachel Weisz. I don’t know what that little tidbit means, but it’s an interesting bit of trivia to astound your friends with at parties.

Rachel, of course, plays cousin Rachel (see what they did there?), and her presence essentially makes this film, though in fact she does not appear for nearly the first third of the movie. The story begins with Philip, an orphan, adopted and raised by his kind and wealthy cousin Ambrose (also played by Claflin, so that Rachel’s initial meeting with him can be punctuated by her surprise at his resemblance to his cousin). The boy grows up without any women in the house, though the young Louise Kendall (Holliday Grainger of Cinderella), his neighbor and daughter of his godfather Nick (Iain Glen of Eye in the Sky) clearly has her eye on him. Philip seems indifferent to her, however, and doesn’t seem to understand her or any other woman. Things change when Ambrose falls ill, and is advised to travel to Italy for his health. From Florence he writes his young ward that he has met a half-Italian cousin of theirs with whom he falls in love and ultimately marries. The naïve Philip doesn’t understand why Ambrose would need a wife when, after all, he has Philip at home, but as Ambrose’s time in Florence is prolonged, Philip gets a much more disturbing letter, in which Ambrose implies that his wife has somehow exacerbated his illness and seems to have designs on his life, referring to her as “my torment.” Philip rushes to Florence, only to find that Ambrose has died, Rachel has left town with all Ambrose’s things, and the only person there to explain the situation to him is Rachel’s enigmatic friend Guido Rainaldi (Pierfrancesco Favino of World War Z and Angels and Demons). But Philip, convinced Rachel has poisoned Ambrose, vows to take revenge on her. When he learns that she plans to come to England to visit her late husband’s estate, Philip is determined to make her pay.

Built up as a kind of villainess in the narrator Phillip’s mind and therefore in the audience’s expectations for nearly half an hour, cousin Rachel turns out to be not at all what we expect when we first see her, through Philip’s eyes, in the candlelit room he has provided for her. She seems nothing more than a poor widow, dressed in black, serving him tizon, an infused tea she concocts herself from her own herbs, and which she continues to push on Philip throughout the film, as she certainly must have done, as well, with Ambrose. The naïve young Philip is soon infatuated with the beautiful and exotic Rachel, and forgets his suspicions of her, swinging to the other extreme and wanting to give her everything he owns.

But others in the village, including Nick and Louise, continue to be suspicious of Rachel, and though their suspicions fall on deaf ears with Philip, we in the audience can’t ignore the questions: Did Rachel come to England just to get her husband’s money away from his heir? Why does she go through the money he gives her so quickly? Is she sending money out of the country to Italy? What is her relationship with the rather smarmy Rainaldo? Is she as loose a woman as some would suggest? What’s in those tizons she’s pushing on Philip anyway? And of course there is the most important question, the one that the whole film hinges on: Did she or didn’t she kill Ambrose?

Du Maurier, I am reasonably certain, wanted that question to remain unanswered at the end of the story—wanted readers to be, like Philip, uncertain about Rachel’s guilt or innocence. For Michell, that seems to be less of a concern. He rushes through a large portion of the novel after Rachel has arrived in England, presenting time passing in a montage rather than allowing tension to mount. Claflin’s Philip is also too obviously unreliable: He plays him like a petulant child most of the time, despite his passing his twenty-fifth birthday during the progress of the story. I suppose his naivete might be explained by being raised without any women in his house, and with his provincial life in Cornwall, and by the lack of intellectual curiosity he all but boasts about when he talks about his schooldays. But these things do not make him a sympathetic character, and they make us less likely to believe him worthy of Rachel’s love, or to approve his suspicions of her, most of which have fairly logical answers that don’t involve her being a murderess.

Weisz, however, is masterful in her depiction of Rachel, and there is a fairly contemporary feminist tone in her performance that Michell presumably wanted to inject into the film: She is, after all, a woman alone trying to provide for herself at a time when there were few options for women, walking a tightrope between charming enchantress and chastely impoverished matron. Wishing to live a life on her own terms, she is nevertheless at the mercy of a boy whose every whim can have profound effects on her, for good or ill.

In its beautiful scenes of Florence and of rural Cornwall, Mike Eley’s cinematography is impressive. Dinah Collin’s costume design is spot on as well, helping to create a realistic period piece. Weisz is excellent in the title role, and the supporting cast is remarkable as well, though Claflin is pretty annoying, but I imagine he’s supposed to be.  Still, the film would have been more suspenseful if his suspicions were more reliable.

Three Tennysons for this one. If you go to see it, you’ll have a more fulfilling experience than you will at The Mummy. And if you really want to see The Mummy, find the 1999 version with Rachel Weisz, and watch that one at home.