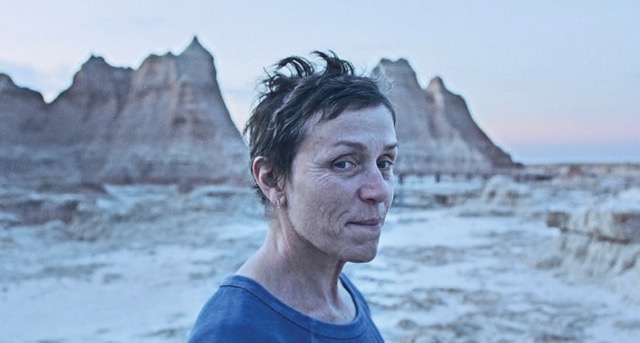 Where to Watch:Included on Hulu

He Said: This is the current movie that everyone seems to be talking about. Or at least posting about. It was released on February 19, in limited release in theaters (which I still think is a pretty bad idea) and streaming on Hulu. Director Chloe Zhao is another of the three women nominated for a director’s Golden Globe, and there’s a buzz about the Chinese-born American director possibly becoming the second woman everto win an Oscar for Best Director.

The film has a 95 percent critics’ rating on Rottentomatoes.com, though only a 79 percent viewer rating. That difference might be explained, I expect, by the fact that the film is quite unlike your typical Hollywood movie: It is not heavy on plot—there’s no compelling story arc; rather the film is a character study of a single individual, Fern (played by a glorious Frances McDormand), and an exploration of a particular lifestyle—the lifestyle of migrants who live in their vans, moving about the country and living off temporary jobs.

It’s a hard movie to categorize. It’s not completely fictional, but it’s also not really a documentary. I suppose it can be considered a “docudrama,” but the film it’s most similar to is Chao’s own previous effort, 2018’s The Rider, which featured no professional actors but starred the retired rodeo rider Brady Jandreau and his friends and family from the Pine Ridge Lakota reservation in South Dakota, and told a story very similar to, but not quite the same as, Jandreau’s own biography. Nomadlandis based on Jessica Bruder’s nonfiction book Nomadland: Surviving America in the Twenty-First Century, for which Bruder hit the road to experience for herself what it was like for these nomads—many of them having lost their livelihoods through the Great Recession of 2008—to adapt to this new migrant lifestyle. McDormand, who optioned the book and was one of the film’s producers, plays a character who doesn’t appear in the book, but is the focus of Chao’s adapted screenplay.

This character, Fern, has lost her husband, who worked for the U.S. Gypsum plant in Empire, Nevada, which, the film’s opening headnote tells us, closed on January 31, 2011, after 88 years. Since the town’s existence depended on the factory, it essentially disappeared—the U.S. post office actually discontinued the town’s ZIP code. Fern, who now has no permanent means of support, takes to living in her van. When in the movie’s opening scene a former acquaintance speaks of her as homeless, she answers “I’m not homeless, I’m just … houseless. Not the same thing, right?”

McDormand’s performance is gut-wrenching from beginning to end. But just as remarkable are the performances of the non-actors—the actual “houseless” people Fern meets on her journey, including the ever-optimistic Linda (Linda May), the practical and fatalistic Swankie (Charlene Swankie), and the alternate-lifestyle mentor Bob (Bob Wells), all playing barely fictionalized versions of themselves. What do you think, Jones, of this approach to filmmaking?

She Said: I found it really effective, because as an audience, we can focus on Fern’s situation and relate to it in a way we may not be able to with a featured individual in a documentary—as fiction writers know, we don’t live our lives in ways that often translate well to discrete stories and narratives. By inserting the fictional Fern to represent such a nomad, the filmmaker can evoke the emotions of knowing her well and create a story around her that represents this lifestyle. Including real-life nomads, the film makes a stronger point about the reality of the situation in the United States and its increasing reliance on gig economy workers and the attendant betrayal of the contract with its citizens that a life of hard work will keep them safe and warm in the end.

Chao needed an actor of McDormand’s range and ability to pull this off, however, because you could not put an actor in scenes with the individuals really living this life if that actor were too performative and lacked the ability to honestly relate to the people in each scene. And if there’s a dude McDormand, it has absolutely got to be David Strathairn (who, as you know, is VERY HIGH on my list of favorite actors). Both of them are riveting on screen, because their subtle performances have all the layers and nuance of real people… they becomeall the characters they play.

This movie is very intense and evocative, because it’s so quiet and intimate. By the end, I could see that this would not be a life I would feel safe within. At the same time, it shows the grand vistas of the American landscape, from Nevada, to my beautiful home state of South Dakota. And we can also see this beautiful world as very indifferent to the plight of those who try to live on it with few resources. Only the caring and compassion of those who love Fern make enough safe places for her to land. What do you think, Ruud, does Nomadlandpresent this lifestyle in a way that appeals to you?

He Said: Absolutely not. The insecurity, the living hand to mouth, the lack of comfort in that cramped van, where it might be extremely hot or dangerously cold depending on where you are and what time of year it is. I admit, though, that the freedom of being outside the grind of capitalism, and the closeness with those magnificent natural vistas (we do get some great views of the Badlands) does have its appeal. But it seems most of those who chose this life are forced into it by economic calamities. It seems to be no one’s first choice.

But to some extent the character of David (David Strathairn) is introduced to suggest that there may be an element of choice here (a complication that does give the film what amounts to its plot). There is a very tentative hint at a romantic connection here when they end up working seasonal jobs in the Badlands and then she follows him into a temporary job at everybody’s favorite billboard advertisement, Wall Drug (“Free Icewater! 596 miles to Wall Drug!”). Both David and, it turns out, Fern have some family connection—a son in his case, a sister in hers—that offer them a way out of this life. Will they take it? Here is where the element of choice comes in.

She Said: I give it four Hitchcocks because not only is it good at what it’s good for, it accomplishes this beautifully in photography, performances and depth of character.

He Said: I could really appreciate this movie and the things that Zhao did that were innovative and perhaps even groundbreaking. If she wins the Oscar for Best Director, I’d say it was definitely earned. And if McDormand (already a two-time Oscar honoree for Fargo and Three Billboards Outside Ebbing, Missouri) wins her third Academy Award, it will be deserved. But I can’t say I had that much affection for the movie. I didn’t really enjoy the unplotted story or the unrelieved sadness. I feel like I was supposed to like the movie better than I did. But I’ll give it three Soderberghs and half a Hitchcock.

This week’s We Watched It So You Don’t Have To/Maybe You Want To?

She Said: The Stranger

Hot Take: I recently finished watching The Stranger on Netflix. I love Siobhan Finneran (Baxter from Downton Abbey), so I was drawn to this British suspense series. Let me tell you, friends, it is bonkers with a touch of bozo, but it’s certainly riveting and it made for excellent treadmill viewing. Your suspension-of-disbelief muscle will get a workout, but while we’re stuck home and streaming, maybe that’s okay.