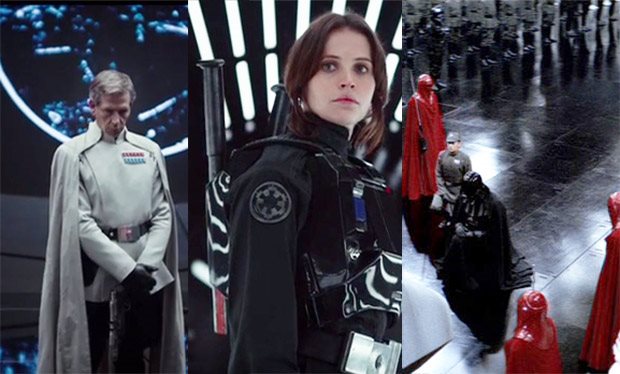 Rogue One: A Star Wars Story

The legend of King Arthur is a body of literary texts that has its roots in oral tales dating back some 1500 years. Over the centuries, new characters and new tangential tales have become attached to a basic story that has grown more and more complex as more and more writers have added their voices to the great chorus that sings the myth. Most often these new episodes have involved what some refer to as “gap filling”: some undeveloped strand from an earlier telling of the story gets picked up and fleshed out by some new narrative. Why should Arthur’s nephew Mordred betray him? Fill in the gap by making Mordred the king’s unacknowledged incestuous bastard. Why should Guinevere be unfaithful? Fill in the gap by giving her a devoted, and in the 12th century when the episode originated, perfectly fashionable courtly lover in the form of the world’s greatest knight, Sir Lancelot.

This is how a great literary tradition grows. In George Lucas’s original Star Wars film (and by that I mean, of course, the 1977 classic now referred to less grandly as Episode IV: A New Hope, and not the abomination that was Episode I: The Phantom Menace), we are told that Rebel spies have seized the plans for the ultimate imperial weapon, the Death Star. At the film’s climax, when the rebel fliers are being briefed before their desperate attack on the Death Star, the Rebel commander shows them the plans, noting that these schematics were obtained at great personal sacrifice by those same spies. Rogue One, the first “stand-alone” film set in the Star Wars galaxy and directed by the relatively inexperienced Gareth Edwards (Godzilla), endeavors to fill in that particular gap: Who were these spies? How did they get these plans? And just what was their sacrifice?

So it’s no spoiler to report that Rogue One ends precisely where the original Star Wars begins. So it’s a kind of very immediate prequel—or as my wife says, a “simul-quel”—but note that no one in Rogue One knows any of the chief characters in The New Hope. When Disney secured the rights to the Star Wars franchise in 2012, they did so not only with intent of completing the last trilogy in George Lucas’s original vast nine-film mythic story arc (a process begun with last year’s wholly satisfactory The Force Awakens) but also of producing what they called occasional “anthology” films, which, though set in that same galaxy far, far away, would be stand-alone films and not part of the overarching myth. Rogue One demonstrates what they meant by that.  Perhaps there will be others, released between installments in the trilogy, that will fill other “gaps” in the main storyline.

This one begins on a remote planet where the pre-eminent scientist Galen Erso (Mads Mikkelsen of Dr. Strange and Casino Royale) is hiding out with his wife Lyra and daughter Jyn. A party of imperial troopers comes to capture him, led by Orson Krennic (Ben Mendelsohn of The Dark Knight Rises), the director of weapons research for the Empire, who needs Erso to help him build the ultimate weapon of mass destruction: the Death Star. Galen is taken and his wife apparently killed, but his young daughter is able to escape, with the aid of her parents’ friend, the radical rebel leader Saw Gerrera, played by the always welcome Forrest Whitaker (Last King of Scotland).

Fast forward a dozen years or so. Now Galen’s daughter, Jyn Erso (Felicity Jones of Inferno and The Theory of Everything) goes under an assumed name, having no desire to be associated with her father, widely regarded to be a traitor to the rebel cause, and she affects to have no interest in either the Empire or the Rebellion, taking the “Plague on both your houses” position. It’s not difficult to figure out how she arrived at this point: the rebels seem to be made up of a patchwork of petty, squabbling factions who can agree on little and so are accomplishing nothing. That is certainly the opinion of Gerrera, who has broken with the rebel alliance and is carrying out a private war of his own from the desert moon of Jedha. Since it was Gerrera who raised Jyn, her attitudes seem to be his, but since she hasn’t seen him since he abandoned her to fend for herself (presumably for her own safety), she doesn’t trust him much either.

The plot really gets under way when an imperial fighter pilot Bodhi Rook (played by Riz Ahmed of Jason Bourne and TV’s The Night Of) defects to the rebels carrying a holographic message from Jyn’s father, declaring that he has been working secretly against the Empire, and has designed the Death Star with a particular flaw that would make it vulnerable to a torpedo shot perfectly placed. Naturally, the bickering rebel leaders don’t believe him and send their top spy, Cassian Andor (Diego Luna of The Terminal and Milk) along with Jyn with secret orders to assassinate Galen. Fortunately, Andor is willing to reassess. But the rest of the film consists of Jyn’s efforts, with the help of Rook, Andor, and a motley crew of misfits and warriors that includes Chirrut Îmwe, a blind warrior-monk devoted to the Force, played by Hong Kong action star Donnie Yen, and his buddy Baze Malbus (Jiang Wen), and a reprogramed imperial droid known as K-2SO, voiced by Alan Tudyk (Moana, Trumbo). There is a huge climactic battle scene which the whole movie leads up to and which I can’t tell you much about, but one important thing to remember about this particular Star Wars story: since this is a stand-alone film, we know that we won’t be seeing any of these characters again. So the outcome of the battle really is up in the air.

This is essentially an action movie, so character development is not high on the director’s list. Or the writers’. The actors do the best they can with what they are given. Some of the lesser characters are particularly memorable. The robot K-2SO nearly steals the show, having been reprogramed so that he must say “whatever comes into his circuits,” which, at times, can be downright rude. Mendelsohn is the embodiment of a smarmy climbing politician, a sycophant to those above him in the pecking order and a tyrant to those below. Chirru is impressive as a martial arts devotee of the Force (no, he’s no Jedi, but he’d sure like to be) and amusing at times as well, like when the imperial troopers grab him and shove a burlap bag over his head and he responds “Are you kidding me? I’m blind!” He and Baze perform as if they are in a Lethal Weapon reboot. As for Ahmed, he is believable and sympathetic as the defecting pilot who is treated with distrust and even contempt by those he is trying to join.

The only character with any real backstory is Jyn. Jones does a decent job with the part, but she often seems a bit bland—something I wouldn’t have expected after her brilliant turn in The Theory of Everything. As Andor, Luna has a lot more life, but though the character hints at some difficult past, we learn nothing about it. The only thing we know about him is that he has a cynical streak—he is on the side of the rebellion, and will do pretty much anything to further its cause, even to the point of murder. He says at one point, “We’ve all done terrible things on behalf of the rebellion.” From what we can see, this is just as true of Whitaker’s Gerrera. So what are we to conclude? Is the film saying that morality is so ambiguous that often the choice between good and evil is a tossup? What motivates Jyn here is proving her father right, not saving the rebellion. What motivates her companions may be just as personal: for the buddy cops Chirrut Îmwe and Baze Malbus it seems their personal friendship is the key. And the pilot Bodhi Rook’s motives for defecting are never clarified beyond a few general comments. Lofty motives of good and evil seem relegated to the back burner. Or is the film saying that people who are flawed in themselves may be ultimately united in a higher goal that furthers the good over the evil? I’d prefer the latter, but I can’t say I’m completely convinced the film does.

So thematically the film seems fuzzy to me. As for its plot, it does seem a bit derivative: after all, you have the orphaned hero who joins the rebellion, you have a robot who provides the comedy, you have a message in the form of a hologram, you have a Death Star nearing completion, and lo and behold, you have in the end a major battle that will go south for the rebellion if they do not get a particular shield down. But much of this is simply a nod to nostalgia for the original film now 39 years old. The freakiest of these nostalgia touches, though, is the character of Grand Moff Tarkin, commander of the Death Star, who for much of the film is the one real “human” connection with the original movie. Tarkin is played, as in the original, by Peter Cushing, looking not a day older than he did in 1977. The freaky thing about this is that Cushing died in 1994. He is a CGI effect here, and it is downright creepy. A better choice, it seems to me, would have been to use some of the original footage for his scenes. He doesn’t look natural—he looks like an animated corpse—which, in a sense, he is.

But I notice I am waxing a bit lengthy in this commentary. Suffice it to say that Rogue One is a worthy addition to the Star Wars family, if kind of a shirttail relation, and if you like Star Wars or science fiction in general, you ought to see it. It’s not a perfect movie—the moral implications are a bit worrisome, as is the night-of-the-living-dead Peter Cushing, but it’s certainly worth three Tennysons.