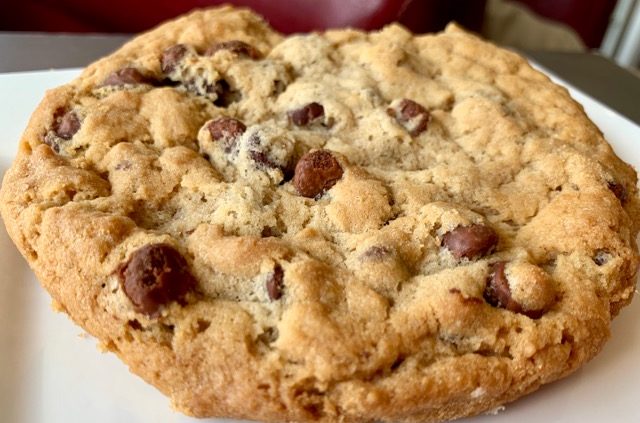 Review No. 158: Round Mountain Coffee

She Said: We’ve been to RMC before, but sporadically, so this was our first experience in assessing it as writers of foods. We’d been to lunch this day, but I wanted a “movable feast,” or a second place for coffee and dessert, so we drove on over.

He Said: Yes, it’s not really a place where you can have lunch. Just coffee or some other sort of beverage, and some sort of sweet snack, a la Starbucks, but without the corporate trappings.

She Said: Well, hold up there, Ruud… I did see a food menu that mentioned quiche, so I think you can have a mild repast there.

She Said: I like the vibe here. It’s very light and airy, with all the natural light from the windows in the store front, the white walls and flooring. There are scattered tables, and comfy chairs for sipping, dining and hangout out.

He Said: They’ve thought a lot about the atmosphere, which is intended to be comfortable and homey. There’s a separate room for meetings or for students gathering for a study session. Clearly the place has students in mind, seeing them as a major target market in this “city of colleges.” Which means I’m really not the target market and was the oldestperson there by a few generations. And there was some hipstering going on…

She Said:I perused the menu before we left home because I’m not as well versed as I could be in coffee words. I decided that a flat white sounded like what I’d have if I were hanging out, living my best life in a pretty café. A flat white has a higher ratio of coffee to milk, and the foam is velvety and less poofy (are those coffee words?). When I arrived, I saw that I had an option of a lavender flat white, and I threw flavoring caution to the wind and went for that. I also was trying to up my carbs for the day, so I had a blueberry scone. The coffee was very good, with great texture and richness in the milk, and strong espresso that the lavender took the edge off. The scone was good, but not necessarily better than Starbucks baked goods, which I kind of expected here. I enjoyed my coffee and carbs very much, even so.

He Said: Never liked coffee. Never will. So what did they have for me? Well, I saw the hot chocolate on the menu and went for it. It was pretty tasty and creamy, with a kind of creamy logo on the top that reminded me of what the trained bartenders used to do with the foam on the top of my Guinness back when I could still drink. But I digress.

And for dessert I had a big chocolate chip cookie, which was as good as any you can get in town. It didn’t seem like some mass-produced object—of course, it could have been, but I suspect it might have come from the cookie shop in the same little shopping area that Round Mountain sits in. Anyway, it was chock full of chocolate chips in a tasty chewy cookie, and in fact was so chocolatey that I could barely taste the hot chocolate afterwards. Anyway, I’d recommend the cookie to those of you who love your chocolate chips as much as I do.

She Said: Service was good. When I purchased my scone, the counter man made sure the woman who was ahead of me didn’t want it before he sold it to me as it was the last one. I appreciated that he looked out for her in a very fair way.

He Said:Yes, service was fine. You order at the counter and then go sit down, and they call out to you to pick it up when yours is ready. The cookie I could bring to the table myself.

What We Got and What We Paid: One lavender flat white, one hot chocolate, one blueberry scone and one chocolate chip cookie. All for $15.42.

Elapsed Time from Our Arrival to Food Arrival: Five minutes.

She Said: I like the variety independent coffee houses add to not only the caffeine choices in town, but also the “third spaces” where you can sip and hangout. I’ll be back.

He Said: It’s a good place. They have a variety of teas as well if you like coffee as little as I do. You can also get Italian Cream Sodas as well as locally supplied Kambucha tea, so there’s a good variety here.

Is Round Mountain Coffee Good At What It’s Good For? Yes, if you want some of the finer things in your coffee life without too much hipstering-so-hard, this is the place for you.