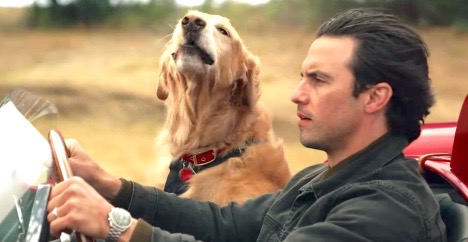 The Art of Racing in the Rain

The Art of Racing in the Rain was a huge bestseller for author Garth Stein in 2008, the sort of novel that cries out to be made into a movie, since it will have a guaranteed audience of folks who already fell in love with the book. There was one little stumbling block in this book’s road to cinematic glory: The narrator and true protagonist of the novel is a dog—Enzo, named for legendary Italian racecar driver Enzo Ferrari. Of course, animation is always a possibility in such a case, but the fact is the novel was written for adults and the plot was not so very kid-friendly. CGI is another possibility these days, but it’s not, after all, a superhero story and such effects probably wouldn’t set the right tone. And so the filmmakers opted for alternative number three: a voiceover by Enzo from veteran actor Kevin Costner.

And that choice was a particularly happy one. Costner’s narration is warm, folksy, wise and funny. Director Simon Curtis (My Week with Marilyn) has chosen to make Enzo a golden retriever, rather than the mixed-breed mutt he is in the book. Dog lovers will find him beautiful and loveable, and his musings philosophical and full of common sense. And dog lovers are unquestionably the intended audience for this film.

Apparently there are not a lot of dog lovers amongst film critics these days, for The Art of Racing in the Rain currently has only a 43 percent rating from critics on the film-review aggregator Rotten Tomatoes. And it’s possible this negative critical reception has served to keep down the audiences for this film, since it made a rather disappointing $8 million over its opening weekend, well behind the other two major opening films, Scary Stories to Tell in the Dark ($21 million) and Dora and the Lost City of Gold ($17 million). But weighing in against outright condemnation of the movie is the heartening fact that 96 percent of the 1,610 audience-member reviews posted on Rotten Tomatoes liked the film (as opposed to just 72 percent of Scary Stories audience members, and 89 percent of Dora viewers).

How does one explain this remarkable 53 percent discrepancy between critics and audiences? Critics are likely to explain it this way: The movie is cliché, manipulative and sentimental, with a plot that is trite and predictable and deliberately designed to pull at viewers’ heartstrings with hackneyed motifs like the family dog, a young girl in danger of being taken from her parents, and a lingering death. Audiences like the movie because they are suckers for such manipulation.

Audiences, however, are likely to answer thus: We can relate to someone we love wasting away from illness because most of us have been there. We can empathize with the possible loss of a child because we love our children. And damn it, we love our dogs too.

Besides, many of those audience reviewers are likely among those readers who enjoyed the book and knew exactly what to expect when they bought their tickets. Curtis and screenwriter Mark Bomback (War for the Planet of the Apes) have created a film adaptation that stays extremely faithful to the novel, so most of what critics are complaining about are things that come directly from the film’s source material—which means that, if the critics knew anything about the book ahead of time, they already had a negative review written in their heads before they saw the movie. You can’t really blame Curtis or Bomback for the film’s canine point of view, or the manipulative sentimentality, because it’s all to be laid at Stein’s door. All except the embodiment of Enzo as a golden retriever. And none of the critics seemed to want to complain about that.

The film opens with the aged Enzo nearing the end of his life (thus capturing the dog-lover’s heart from the first moments), and the story is told almost completely through Enzo’s flashbacks. He is adopted as a puppy by Denny Swift (Milo Ventimiglia of TV’s This Is Us), a Seattle-based race car driver with a lot of  talent but still looking for his big break. Denny and Enzo are inseparable, as Denny takes his dog to the race track and watches videos of his own performances as well as classic races with Enzo, all the time talking to him about his philosophy of racing, a philosophy that Enzo picks up and applies to life itself. Denny is at his best driving in the rain, for he knows better than other drivers that the secret is to “create your own conditions” rather than allow the rain to dictate what you do. Concentrate on the present rather than the past or future, Denny tells Enzo, and remember that when you drive, the car goes where your eyes go. All these little snippets of wisdom are, we and Enzo assume, applicable not just to driving but to maneuvering through the tempests that life will throw at us.

Enzo’s first squall comes in the form of Eve (Amanda Seyfried of Mama Mia! Here We Go Again), whom Denny meets and is immediately charmed by. Enzo doesn’t really see the attraction. “Denny was clearly taken with her grooming,” he relates. “She probably bathed every day for all I knew. I admit I loathed the attention he lavished on her, with her opposable thumbs and plump butt.” But he learns to share his beloved Denny when he and Eve are married, and when daughter Zoe (Ryan Kiera Armstrong from TV’s Anne) arrives, Enzo takes very seriously his role as her protector. Eve’s wealthy parents, Trish (Kathy Baker of TV’s Picket Fences) and Maxwell (Martin Donovan of TV’s Big Little Lies), whom Enzo calls “the twins,” don’t much like Denny, and Enzo is wary of them, rightfully as it turns out. Denny and Eve’s tranquil life soon goes off the rails, but I won’t spoil it by saying any more. If you’ve read the book, you already know.

All these things, as mentioned, are seen through the lens of Enzo’s eyes and his memory. Thus, for example, for a film whose title suggests that “racing” will be an important element, there are precious few actual race scenes in the movie, and those there are, are mainly seen on television, because that’s where Enzo sees them. So if you’re looking to see a movie with thrilling race scenes, wait for Ford v Ferrari later this fall, because you won’t find it here. One of the critics’ main knocks on this film is that we don’t really get particularly close to the characters, and that they seem thinly developed, and this mainly because we don’t know them directly, we know them only through Enzo’s thoughts.

But critics who say that seem to be missing the point. The fact is that this is not a movie about the human characters. This is a movie about a dog. That’s what the dog lovers in the audience understand that the critics do not. This is Enzo’s story. Enzo spends his life learning, from his own experiences, from Denny, and from watching TV, which he does a lot. We learn from the aged Enzo in the movie’s first scene that he has become wise through conscious effort, because he firmly believes something he’s seen on a television documentary about Mongolia: According to Mongolian legend, dogs may be reincarnated as human beings if they achieve a certain level of enlightenment in their canine lives. And the film is the story of Enzo’s enlightenment through his loving relationship with Denny.

For me, that particular aspect of the movie, and the book that inspired it, is the least compelling point. From my own experience of dogs and humans, I can say that a dog, as capable of selfless love as any human (and more capable than most), is as worthy a creature in his own right as the majority of people and has no need be reborn as a human. And I suspect that the dog lovers who are this film’s intended audience will feel the same way. I’ll give this one three Tennysons.

amed a finalist for the INDIE award for best Mystery novel of the year: