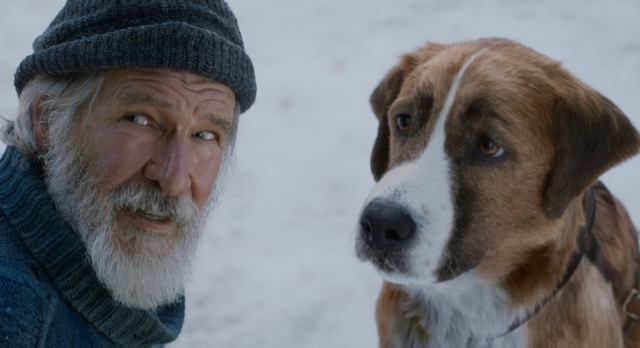 The Call of the Wild

When I was in eighth grade, I was given a copy of Jack London’s classic dog-and-Yukon adventure novel The Call of the Wild, and it opened up a whole world of literature for me that wasn’t sports or science fiction or juvenile fiction, but that dealt with more adult themes. I suppose London’s short novel was a kind of a YA book before such a category really existed, but it was definitely the first novel I’d read in which the main human character died, or that dealt with Darwinian implications on a kind of a personal level. Anyway I moved on from London to Dickens and Twain and Steinbeck and a whole host of books that I found on a teacher-generated list of “books you should read before you go to college.” And then I majored in English.

So you can see what a central place The Call of the Wild has always had in my personal history. Imagine my chagrin when I first viewed the 1935 Clark Gable adaptation of the novel on an old-time movie channel back when I was in high school. There was a big dog in it. And there was a sympathetic owner named John Thornton. And, further, it was set in the Yukon during the gold rush of 1898. There were a couple of scenes that actually bore some resemblance to scenes in the novel, but nobody was going to kill off Gable and Buck never really heard the call of the wild, so I’m not sure how the title fit the film’s story. Anyway, I was pretty appalled. After all, this is a book that has never been out of print since its first publication in 1903, so it clearly tells a story that has always appealed to readers in all times and places, so why would you mess with it? And when I started seeing trailers for a new Call of the Wild film with Harrison Ford (maybe the contemporary equivalent of a Clark Gable) and produced by Disney no less, with its reputation of sanitizing classic stories to make then more family-friendly, I didn’t hold out much hope for this one.

But I got a surprise when I started to watch the film and it actually seemed to be following, to a large extent, the actual plot of the book. As in the novel, Buck, a large and intelligent cross between a Saint Bernard and a Rough Collie, is raised and somewhat pampered by Judge Miller (Bradley Whitford in what amounts to a cameo) in Santa Clara Valley in California. But when potential sled-dogs become a valuable commodity after the gold strike in the Yukon, Buck is dognapped and shipped to Seattle in a crate, and when he is finally released from his crate, he is beaten into submission, shown the “law of the club,” by a “man in a red sweater.” In the novel this is a powerfully disturbing scene. The current film underplays it somewhat, showing Buck being struck only once and that only in a reflected shadow rather than full-on, so it’s much less disturbing, and Disney keeps its PG rating.

Buck is sold, again following the novel’s plot, to a pair of French-Canadian dispatchers employed by the Canadian government, François and Perrault (Omar Sy of Jurassic World) and Françoise (feminized from the novel’s François, and played here by Cara Gee from TV’s The Expanse). Buck is trained as a sled dog, and the film includes some comic scenes as he learns to pull with the team and to follow directions. He also learns a lot from the other pack members, and is ruled with an iron paw by the pack leader, a vicious white husky named Spitz. At one point, Buck stands up to Spitz, essentially challenging him for dominance in the pack. In the book, Buck kills Spitz. But not to worry if you’re planning to take your kids: Disney just has Buck win the fight and send Spitz packing. So still PG, folks.

The turning point of the film, and the novel, comes when the kindly French-Canadian dispatchers are ordered home by the Canadian government who have suspended the mail service in their area, forcing them to sell their dogs. Buck is acquired by an ignorant and brutal newcomer named Hal (Downton Abbey’s Dan Stevens), who has no idea how to handle his dogs, and drives them nearly to death. Enter the mild mannered John Thornton (Ford), who acquires Buck  (I won’t tell you how here, since I’ll try to avoid spoilers for the most significant points of the plot) and decides to take the dog into a part of the country where no one is likely to disturb them. In the film, Thornton is mourning the loss of a child and has separated from his wife and come north not to search for gold but to heal and to leave the world behind.

In London’s novel, from the time Buck reaches the Yukon and begins to grow accustomed to the rigors of life so far from human civilization, he is fascinated and attracted by timber wolves who appear when he is alone, and seem to speak to him of another life, a life more natural for his species than living a soft life with human beings. This urge, this “call of the wild,” beckons Buck more and more frequently as he stays with Thornton, and in the film the call becomes especially strong in the lonely wilderness where the man and dog live together. He takes to going off with a young she-wolf for periods of time, but always returning to Thornton’s cabin.

In the novel, Thornton is eventually slain by a band of Yeehat Indians while Buck is away—and Buck, in revenge, attacks and kills several of the Yeehats, after which, with all ties to human beings severed, he joins the wolfpack, and becomes its leader, singing “a song of the younger world, which is the song of the pack.” That ending would almost certainly ruin the necessary PG rating, and would be pretty insensitive to Canadian First Nation considerations, so you can bet that’s not how the movie ends. It’s our vindictive old friend Hal who serves here as the villain, but any other details would be spoilers, so you’ll have to see it yourself. With your kids, since, as I’ve said, it has a PG rating.

The film has some beautiful scenery that might make you want to take a trip to the Klondike yourself before global warming destroys it. Ford is sympathetic and appropriately understated as the gruff, crotchety Thornton, and he narrates the film with a fitting growl—a fact that might make you think twice about whether you think he dies at the end or not. Sy and Gee are relatable and believable as the husband-wife mail delivery team. As Hal, however, Stevens is a melodramatic one-dimensional villain more reminiscent of one of Disney’s cartoon heavies like Gaston or even, God help us, Cruella Deville. And perhaps this is where Chris Sanders (best known for his direction of cartoon features like How to Train Your Dragon and Lilo & Stitch) and screenwriter Michael Green (chiefly known for superhero flicks, like Logan, Green Lantern and TV’s Smallville) err, veering from London’s material and trying to transform an original story that has Buck yearning to “wash his muzzle to the eyes in warm blood” into a Disney family cartoon narrative.

Which brings us to Buck himself. At least Clark Gable’s version—and all other previous adaptations of the novel—used a real dog to play Buck. Sure, it’s probably a lot easier to create a CGI version of a dog that will do exactly what you want him to in each scene because he is, basically a cartoon, than to train a real dog to perform the kind of stunts he would have to do in a film like this. But anyone who owns a dog, or four as I do, is going to be a little bit annoyed at the substitution of a CGI model for the real thing, especially in adapting a novel best known for its literary naturalism. There’s something not a little ironic in a story all about a canine’s abandonment of the artificial world of human civilization using an artificial creation to substitute for an actual canine actor.

And so I’m somewhat torn in evaluating this movie. It deserves praise for following London’s story relatively closely. The beginning, with its Buck-as-Beethoven comedy, and the end, with its Dan-Stevens-as-Snidely-Whiplash excesses, are the worst parts of the movie, and are unworthy of the material (who thinks London’s book is a kiddie story?). The middle of the movie, focusing on the relationship between Thornton and Buck, is the truest and the best part. Overall, I’m giving this film two Jaqueline Susanns and half a Tennyson. See it if you want, but don’t expect Lassie Come Home or Old Yeller. It’s more like There Will Be Blood reimagined as Mary Poppins.