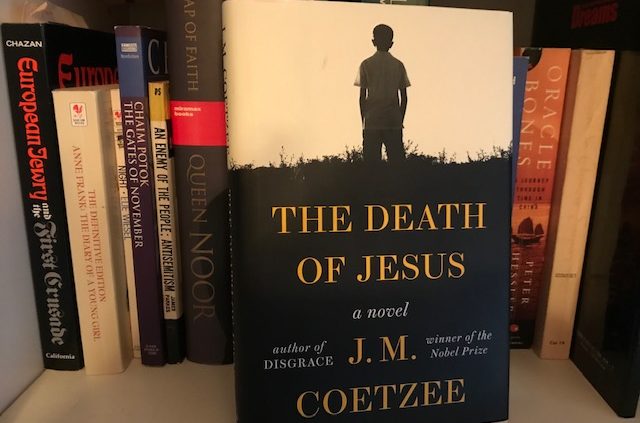 The Death of Jesus

Nobel laureate and two-time Booker Prize winning novelist J.M. Coetzee has spent the bulk of the last decade composing a trilogy that (perhaps even more than his earlier novels, if that is possible) has managed to confuse and frustrate his readers. The “Jesus” trilogy—which began with The Childhood of Jesus in 2013 and continued with The Schooldays of Jesus in 2016—ends with this 2019 novel, The Death of Jesus. Perhaps the books would be less frustrating if Coetzee had given them different titles, perhaps simply Childhood, Schooldays, and Death. Since the books deal in no straightforward manner with the life of the biblical Jesus of Nazareth, readers have been trying, usually in vain, to read them allegorically as representative of that life, but have found no “there” there. Alex Preston, reviewing the book for The Guardian, finally said “I’m increasingly convinced that this trilogy is an elaborate joke by its author at the expense of the exegetes attempting to ‘translate’ his work.”

Sure, there are certain things we can probably all agree on. The characters as introduced in The Childhood of Jesus do seem to have suggestive names: David, a 5-year-old orphan child in that book, bears the name of the line from whom the Messiah is to come. Simón, who recognizes that the boy is special, has a name that recalls Simeon, the faithful Jew in the second chapter of Luke who pronounces the Nunc Dimittis when he recognizes the child Jesus, brought to the Temple by Mary and Joseph. We may wonder why he isn’t named Joseph, since he becomes the boy’s adoptive father, but instead he calls to mind Jesus’s first disciple. As for Inés, the woman who agrees to act as the boy’s mother (though never engaging in any intimate relations with Simón), it is no surprise that her name means “virgin.”

And then of course there is the dance teacher, Ana Magdalena, in the second novel, a name that needs no explaining. This Magdalene, however, is the 8-year-old David’s teacher whom he greatly admires, but who is ultimately murdered by the brutal and unbalanced Dmitri. David has been close to Dmitri, and one could read this part of the trilogy as suggesting Jesus’s concern for the outcasts and misfits of the world. But the fact is at this point the novels seem to get their inspiration not from the Gospels but from Dostoyevsky. Coetzee’s fascination with the Russian novelist is well established, and his Master of Petersburg features Dostoyevsky himself as a character. Here, with a passionate Dmitri as well as a gentle assistant instructor named Alyosha, we seem to have crossed into the world of The Brothers Karamazov. It’s difficult to think of The Brothers Karamazov in a novel purporting to be about Jesus without considering the “Grand Inquisitor” chapter from that novel: In that famous chapter, Jesus returns to earth at the time of the Spanish inquisition, performs miracles, and is arrested and condemned to death by the Inquisition. The Grand Inquisitor, meeting with Jesus the night before his execution, explains to him that the Church has outgrown him and no longer needs him. Has the “Jesus” of Coetzee’s novels been born into a world that has no use for him? Where even his closest followers, like Simón, will fail to understand him?

In any case, the world of David, Simón and Inés is an existential one in which existence definitely precedes essence: In the first novel, the characters come as refugees into a new land, a city called Novilla, and they cannot remember anything about their former lives or where they have come from, and thus are beginning anew. Meaning will have to be snatched from whatever they find in this new land. In this final novel, things come full circle, as Simón and the 10-year-old David, who is wasting away with some mysterious disease, discuss death and the possibility of life after death: “It is as if you have been born again at that very moment,” Simón suggests. “You have no recollection of any past, no recollection of dying.” That is to say, it is precisely the condition in which David and Simón arrived in Novilla in the first novel. Are the novels to be read in a circular manner? Is there a Buddhist-like cycle of life and death suggested here? But it would be misleading to suggest that there is any certainty here. Essentially their conversations, which are dominated by David’s need to know why he exists, what his purpose is, end up without definitive answers:

“It is against the rules to summon people from the next life back into this one.”

In fact the world David inhabits recalls Coetzee’s earlier novel Disgrace, in which the professor David Lurie looks at his students and thinks he “has long ceased to be surprised at the range of ignorance of his students. Post-Christian, posthistorical, postliterate, they might as well have been hatched from eggs yesterday.” Is this the contemporary world? Is it the world of David the new Jesus, a world that has no roots and so cannot recognize a savior when he comes—or, like the Grand Inqisitor, would prefer to let him die?

This last novel has a fairly simple plot: David, who had become a fine dancer in the previous novel, is an excellent soccer player as this novel begins, and he is offered the chance to play soccer for the Las Manos orphanage. The 10-year-old David decides he should be in the orphanage because Simón and Inés are not his real parents. But one day he falls on the soccer field and is taken to the hospital, where he is found to be suffering from a strange malady that the doctors do not understand and seem unable to do anything about. David’s situation worsens, and the hospital staff seem indifferent to his condition but also refuse to give Simón and Inés parental rights to make decisions about the boy’s health. To make matters worse, the murderer Dmitri, who had been confined to the mental ward of the hospital, is now considered “cured” and as a hospital orderly becomes closely connected with David.

On a strictly human level, the horror and frustration of the bureaucracy that keeps Simón and Inés from their child is moving to the point of enraging. But the book takes a curious turn as David’s schoolmates keep visiting him and, like little disciples, crowd around his bed as he tells them stories from Don Quixote, which he has read and memorized, and out of which he creates new stories about the Knight of the Woeful Countenance as parables from his own imagination. The suggestion seems to be that Quixote sees life not through the lens of pure reason (as practical, unemotional Sancho-like Simón is wont to do) but through imagination colored by emotion (as Dmitri is more likely to do). Perhaps this is the new Jesus’s message for the world?

If it is, we’ll never know. David dies long before the end of the book, and before he ever delivers his message. Simón and Inés are not even informed of his passing. Whatever his legacy is may be left in the hands of Dmitri, who claims to have been the one person to whom David told his secret message. Turns out he’s lying, but who’s to know? Is this Coetzee’s suggestion of how stories of Jesus’s resurrection arose among his own followers?

Nothing is really certain here. And that certainly is intended. But I won’t say that Coetzee is having a joke at his readers’ expense. Like most of his novels, this is a story in which we are presented with the existential problem of trying to break through the consciousness of another, of trying to penetrate the life of the Other and truly understand. Nobody in the novel is able to say definitively what or who David was, and the one who thinks he can, Dmitri, is a madman. In the end Jesus, as “Other,” is just as impenetrable as anyone else.

Sir Walter Ralegh’s “The Nymph’s Reply to the Shepherd...
Scroll to top