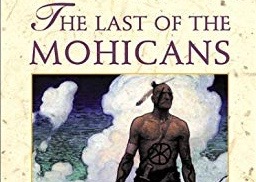 The Last of the Mohicans: A Narrative of 1757

In my ongoing quest to read in my retirement a slew of books I neglected to read in my youth, I pulled this classic novel off my shelf a few weeks ago and with a little bit of trepidation, knowing something of Cooper’s up-and-down critical reception, plunged right in. James Fenimore Cooper was the first significant American novelist—the first  to gain an international reputation, the first to write a worldwide best-seller. His Leatherstocking Tales, a series of five romantic novels set in the American wilderness chronicling the career of frontiersman Natty Bumppo (better known as Hawk-eye), were the most popular American novels of the first half of the nineteenth century, and continue to be the most popular nineteenth-century American novels throughout Europe. The Last of the Mohicans, the second book of the series, has consistently been the most read and most appreciated of all Cooper’s works, and remains so, having given rise to at least ten films produced in the United States alone, not to mention radio, television, comic book, and opera versions of the story.

It’s not difficult to see why Cooper’s novels gained such a wide readership. Their style and tone derived in no small part from the novels of the most popular English author of the day, Sir Walter Scott, father of the “historical novel” and purveyor of romance and mythic paragons of chivalry like the very popular Ivanhoe. Cooper’s own mythic creations—the image of the honest, practical, self-reliant frontiersman whose nobility rests on his own talents and not on his parents’ bloodline; and the image of the “noble savage,” the indigenous native, uncorrupted by civilization, who represents the unfallen goodness of humankind. Cooper’s Hawk-eye embodies the first of these mythic beings, and his Indian companions Chingachgook and Uncas (the novel’s title characters) the second.

The book’s historical setting is the French and Indian War, the American branch of the Seven Years War between England and France and their allies. Both Great Britain and France employed Native American allies in the war in North America. Cooper focuses on events surrounding the British surrender of Fort William Henry, on Lake George in upstate New York. British Colonel George Munro commanded the fort under the supervision of General Webb, quartered with a much larger garrison at Fort Edward. In early August of 1757, Munro was besieged by some 7,000 troops under the French General Louis-Joseph de Montcalm. He pleaded with Webb favor reinforcements, but Webb felt he could not spare any, since his army was the only thing standing between the French and Albany, and he advised Munro to negotiate the best terms he could get with Montcalm. And agreement was reached that allowed Munro to withdraw under parole, yielding the fort two Montcalm but being allowed to withdraw peacefully to Fort Edward. However, Montcalm’s Indian allies, whom Cooper identifies as Hurons, angered at being denied the spoils of the battle, attacked the retreating column, killing perhaps as many as 200 and taking hundreds more captive.

Cooper sensationalized the massacre, claiming hundreds more dead. But chiefly he personalized the plot, introducing Hawk-eye and his two Delaware companions as scouts for the British army, and two daughters of Colonel Munro, Cora and her younger half-sister Alice, who become pawns in a deadly game of love and passion between the British and the Huron tribe of French allies. To these characters Cooper adds Major Duncan Heyward, a British officer from Virginia who falls in love with Alice, and David Gamut, the “singing master,” who teaches music, specifically the singing of psalms, and who seems wildly out of place on the frontier. Finally, there is Magua, otherwise known as le Renard subtle (the “sly fox”), the chief villain of the piece: a Huron chief cast out of his tribe for drunkenness, he is conniving to win back the favor of his tribe by deceiving the British forces. In fact, he is seeking revenge on Colonel Munro, whom he blames for giving him whiskey and then whipping him for drunkenness. He is also lusting after Cora, and connives to take her captive.

The novel begins with Major Heyward accompanying Cora and Alice through the forest from headquarters to join their father at Fort William Henry. They are joined by the psalmodist Gamut, but have unwittingly chosen Magua as their guide, and the cunning fox is leading the completely out of the way. Natty Bumppo, Chingachgook and Uncas happen upon them, and their encounter causes Magua to flee. Expecting Magua to return with a war band of Hurons, Hawk-eye and the Mohicans lead Heyward, Gamut, and the women to a cave they know concealed on an island in the river. Magua and his war band capture the original group of four, but Magua says he will release the other three if Cora consents to be his wife. The four are rescued by Hawk-eye and his companions, and ultimately reach Fort William Henry, but find it under siege by the French and Hurons. They are able to get into the fort, but Colonel Munro is forced to surrender to the overwhelming French force. Alice and Cora are among the evacuees who are attacked and largely massacred after the surrender, but Magua takes both of them captive and takes the back to the Huron village, with David Gamut in hapless pursuit.

Of course, Hawk-eye, Major Colonel Munro, Uncas and Chingachgook pursue Magua, and, meeting Gamut at the Huron camp (the Hurons have spared his life, considering him a harmless lunatic), Gamut reveals that Alice is being held here by the Hurons, but that Magua has taken Cora to the neighboring Lanape or Delaware tribe. I won’t reveal any spoilers here, but I will say that the rescue of the women involves some interesting disguises, such as that of a French medicine man and, I kid you not, a large bear. It also involves a tortuous ordeal for Uncas, who it seems wants Cora just as badly as Magua does.

There is no doubt that the adventure of the story is appealing and entertaining. There seems to be no doubt that Cooper’s image of the American frontiersman and the “noble savage” were effective and have stayed in our national psyche for two centuries. But there are aspects of the book that make it hard to swallow for contemporary readers. Cooper’s idea that the Indians are a dying race (Hawk-eye’s companions are, after all the “last” of the Mohicans), being replaced by the superior, more highly evolved Europeans, is an unspoken but manifest assumption in the novel. Cooper’s attitude toward race in general is far from PC: Cora, Munro’s older daughter, is the product of a liaison with a woman who is described as having been at least partly of African descent. This seems to be what makes her attractive to Magua as well as Uncas. But her marriage prospects seem undesirable at best, from Munro’s point of view, and tragic at worst, from her own. Marriage, or cohabitation, between races seems a doomed path as Cooper presents it.

Another annoying aspect of the book for a contemporary reader is Cooper’s characterization of the two daughters. Alice, the younger, blonde daughter sired by Munro on his legitimate, white wife, is a delicate flower who does a lot of screaming and fainting like the helpless damsel in distress of traditional romance. Cora, on the other hand, is assertive, has a mind of her own, does whatever she can to protect Alice, answers for herself that she is willing to go off with Magua if it means saving her sister. And yet it is Alice that Major Heyward is drawn to. I think any modern reader will ask “Why?” As for Cora, she’s much better off if she goes with Uncas, but as I said before, that connection appears doomed.

It was Mark Twain who drove the first real nail into Cooper’s literary reputation in his 1895 essay “Fenimore Cooper’s Literary Offenses.” The master of colloquial style chiefly took Cooper to task for his formal diction, wordiness, and imprecise use of language. Describing The Deerslayer, another of the Leatherstocking ales, Twain concludes

It has no invention; it has no order, system, sequence or result; it has no lifelikeness, no thrill, no stir, no seeming of reality; its characters are confusedly drawn, and by their acts and words they prove  that they are not the sort of people the author claims that they are; its humor is pathetic; its pathos is funny; its conversations are—oh! Indescribable; its love-scenes odious; its English a crime against the language…

Don’t hold back, Mr. Clemens, tell us what you really think. Of course, Cooper has had his defenders too over the years, but Twain’s criticisms of Cooper’s style in particular seem well founded. There is no doubt that The Last of the Mohicans is a significant book in America’s literary history: It set the pattern for the historical novel in America, it looms large in the creation of American myths, it has influenced countless writers since its publication and it has been one of the most popular books ever written by an American novelist. It’s not the Great American Novel that its first readers thought, but it is far from insignificant, and you probably ought to read it—but be prepared for some less-than-enlightened points of view.