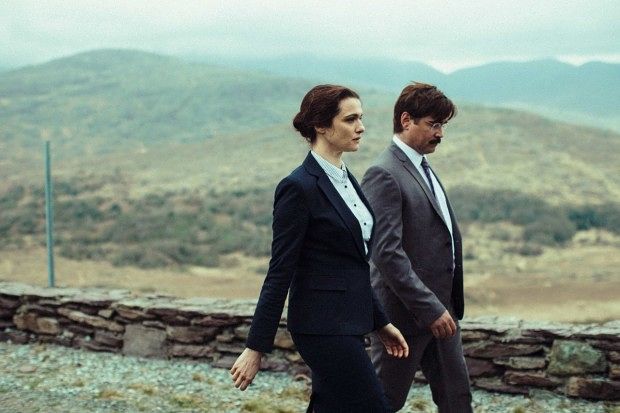 Greek filmmaker Yorgos Lanthimos, best known in the U.S. for his movie Dogtooth, which was nominated for an Academy Award for Best Foreign Language Film, and which also won the Prix Un Certain Regard at Cannes in 2009, presents his first English-language feature film in the summer’s avant garde surprise, The Lobster.

This film had a long, hard road to get to central Arkansas. No slick Hollywood product, it was internationally produced by film companies from Lanthimos’s own Greece as well as from Ireland, the Netherlands, the United Kingdom, and France, where it was also selected to compete for the Palme d’Or (the highest honor) at the 2015 Cannes Film Festival. It won the Jury Prize at Cannes (the third highest award) last year, and also was presented at the 2015 Toronto International Film Festival, where it was critically acclaimed. It was finally released in the United States on May 13 of this year, and at last came to Riverdale 10 cinema in Little Rock last week. My advice is, see it while you can, and keep an open mind. Whatever preconceptions you may have, this film will confound them.

After a bizarre and disturbing opening scene involving a woman and a mule, the significance of which does not become clear until much later, the film opens as David (Colin Farrell) has just been dumped by his wife. He asks her the apparently irrelevant question of whether the man she is leaving him for wears glasses or contact lenses. Then David (who wears glasses) and his dog leave home and check into a hotel. This all seems pretty straightforward, and we seem to be in our own contemporary world—where a man whose wife has thrown him out is likely to check into a hotel, right? But at this point, the plot veers from the everyday situation into a nightmarish, perhaps Kafkaesque twist, for it seems that this hotel is merely a kind of prison, where single people are sent. The world of this film demands that each individual be part of a couple. Those who, like David, find themselves suddenly single, are allowed 45 days to find a suitable partner and “fall in love.” If they fail in this, they are turned into animals. But at least they are able to choose the animal they will become. David chooses the Lobster—because lobsters live a long time, they have blue blood like rich people, and they live in the sea. Of course, there are two other things about lobsters that he fails to mention that might be significant for David’s story: first, they live inside shells, something that can be said about the cautious, undemonstrative David as well. Second, as any fan of the T.V. show “Friends” can attest, they mate for life.

In any case, the hotel manager is pleased with David’s choice. Most people want to be dogs, she tells him, which is why so many species are endangered. David’s dog, it turns out, is actually his brother. In the hotel, the “guests” are subjected to poorly performed propaganda skits about the value of companionship, to social events that have the feel of middle-school “mixers,” and to strict rules that severely punish masturbation but that require sexual stimulation by the hotel maid that stops short of any sort of climax—this, presumably, to encourage couples to get together. A monkey wrench in the system is that it seems a requirement that only couples with some rather arbitrary “defining feature” in common are allowed to get together. David makes two “friends” (for lack of a better term) at the hotel: a “lisping man” (John C. Reilly) and a “limping man” (Ben Whishaw), who apparently are expected to find mates who, respectively, lisp and limp. Whishaw’s character goes so far as to pretend to have spontaneous nosebleeds (he smacks his face into walls deliberately) so that he can hook up with the “nosebleed woman” at the hotel (Jessica Barden). The two don’t really seem to belong together, but it seems a better alternative than being turned into animals. Besides, they are given a child to raise, which always seems to bring couples together, at least in the opinions of the leaders of this society.

Inmates of the hotel may actually earn additional days beyond their initial 45 to find a partner by hunting down members of a rebel band of “Loners” and shooting them with tranquilizer darts. They bring their quarry back to the hotel—presumably to be either imprisoned as violators of the couples law, or turned into animals as unrepentant loners. Ultimately, by a surprising twist of plot, David ends up joining these loners for awhile—revolutionaries who reject the ruling society’s fundamental tenet of faith in couplehood. What seems at first to be an escape from smothering conformity turns into a rigid tyranny with its own rigid rules and punishments, meted out by the group’s Leader (Léa Seydoux) and tolerated by both David and the Short Sighted Woman he meets there (Rachel Weisz). More than that I cannot tell you without spoiling things. But there’s a lot more that happens.

The eeriness of the movie is exacerbated by its being set in a world that seems just like our own—it has something of the feel of Ishiguro’s Never Let Me Go, or, of course, Kafka’s The Trial. Some critics have called the film “Absurdist,” emphasizing its affinities with Theater of the Absurd pieces like Beckett’s Waiting for Godot or, perhaps more directly, Eugene Ionesco’s Rhinoceros (in which people randomly turn into animals). There is some accuracy in this description: Characters in the Theater of the Absurd tend to be types rather than rounded characters, and in The Lobster characters are simply labeled characteristics, like the Nosebleed Woman or the Lisping Man. This aspect is emphasized deliberately by the acting style used in the film: Farrell, Weisz, and the other characters project a stilted, awkward, emotionless affect (like lobsters in their shells), almost as if they are all somewhere on the autism spectrum. In addition, absurdist plays juxtaposed broad comedy with horror and nightmarish fantasy, a mixture that Lanthimos includes repeatedly.

But significantly, Theater of the Absurd abandons traditional storytelling structures and presents a nonrealistic setting, while The Lobster follows a traditional cause-effect storyline and it places its horrors in our own realistic world. And more significantly, the “absurd,” as defined by Albert Camus in The Myth of Sisyphus, depicts human beings moving through an anguished existence in which they attempt to create meaning in a meaningless universe in that brief moment of their existence between the nothingness from which they come and the nothingness to which they return. Certainly in The Lobster, there are absurd attempts to impose meaning, both in the hotel and in the forest realm of the Loners. But though the end of the film has its own horrors, I would suggest that it does not suggest meaninglessness, but rather a glimmer of hope in a hostile world.

So for me this film, though abounding in dark humor, is not absurdist but rather a straightforward, albeit unconventional, satire of contemporary attitudes toward relationships: our society’s unspoken but prevailing assumption that one must be in a relationship in order to be a complete person. A human being without a partner is a social pariah—something not even human, but bestial. The sentimental clichés that govern society’s assumptions—the naïve notion that we need to have “something in common” with our mate, without regard to the quality of that common interest, the assertion so overwhelmingly contradicted by all human experience that having a child brings people closer—are skewered in the hotel scenes of the film, while the opposite idea, that it is possible, even preferable, to live happily without intimacy with another, is skewered in the episodes in the forest among the Loners. And note that satire is not absurdist, because satire implies the possibility of reform.

This is not a film that someone seeking a fun-filled or action-packed summer escape movie will find satisfying. But I recommend, if you want a film that will get you thinking, that you take this one in. I’m giving it three Tennysons.