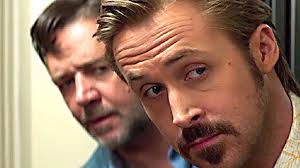 In contrast with this week’s major holiday weekend openings of the uninspired new X-Men movie and the totally unnecessary sequel to Alice in Wonderland, both of which have underwhelmed critics and audiences alike, you might want to see the considerably less hyped but far more enjoyable The Nice Guys, the latest offering from Iron Man III director and screenwriter Shane Black. Black, who first made his mark on Hollywood with 1987’s buddy-cop movie Lethal Weapon, has given us a very similar sort of odd-couple film featuring private investigator Holland March (Ryan Gosling) and tough-guy Jackson Healy (Russell Crowe), whose job is basically beating people up for money.

Black, whose oeuvre (including the similarly dark comic mystery, 2005’s Kiss Kiss, Bang Bang) has been called “comic noir,” fills this film with homages to Dashiell Hammett and Raymond Chandler, creators of the Hollywood-noir genre, as well as to Crowe’s earlier success in L.A. Confidential. The comic aspects of the film, of course, owe something to buddy films like Lethal Weapon and, prior to that, The Sting, Silver Streak and Thunderbolt and Lightfoot from the 1970s—the decade in which The Nice Guys is firmly set. For that matter, it even channels earlier comic buddy films like the Hope/Crosby road pictures and Abbot and Costello movies—Gosling does a hysterical Lou Costello impression at one point when he falls upon a dead body.

In a memorable opening sequence, a young adolescent boy, sneaking a look at his father’s porno magazine of a centerfold named “Misty Mountains,” passes by a picture window in his home in the Hollywood Hills, through which we can see a car plunging off the road and coming toward the house. After the car crashes into—and right through—the house, the boy goes out to see the naked and bloodied body of that same actress lying and breathing her last in the wreck. She whispers her dying words to him—“How do you like my car, big boy?” When she dies, in a tender gesture, the boy covers her body with his shirt as he hears the police sirens coming.

In a way, this is a bit of foreshadowing for what motivates Crowe’s character Healy for much of the film: A concern with loss of innocence, and with protecting young women from violence. When we first hear him in voiceover (a little device that disappears from the film after the first few scenes), he is lamenting the fact that kids nowadays are way too worldly-wise, more than they ought to be, after which we see him using a set of brass knuckles to flatten a drug dealer who has been enticing a 13-year-old girl with marijuana. This is also how he meets March, Gosling’s character, since a young woman named Amelia (Margaret Qualley) complains to him that some men have been stalking her, and pays Healy $50 to dissuade the one whose name she knows—March—to back off. Healy pays March a visit and breaks his arm, telling March he needs to “get the message” to leave Amelia alone—all of this before discovering that the real bad guys are after Amelia to kill her. March has been after her because he thinks she may know something about the dead porno actress, who her aunt believes is still alive. So Healy comes back to Gosling, who in an extended slapstick scene tries to juggle a newspaper, a cigarette a gun, and a restroom stall door while sitting with his pants around his ankles, as he warns Healy off. Healy, of course, now wants Gosling to help him find Amelia. And is willing to pay him $400—of his own money—for two days to help him find the girl.

So if a desire to protect young women from violence and to do something that he thinks is truly worthwhile are the things that motivate Healy, what motivates March? Mostly it’s money. He’s fairly good at his job, but he’s better at getting his clients to cough up extra money by telling them he’s “close” to finding the answers they want. He’s also motivated by liquor, and unlike the hard-drinking Chandler or Hammett P.I.’s on which he is based, he doesn’t hold it all that well. The one positive motivation he has in his life is his 13-year-old daughter Holly, played with precocious flair by the young Australian actress Angourie Rice.

Rice is put into situations that illustrate Healy’s lament at the beginning of the movie about kids being too savvy about “adult” concepts and situations. She stows away in the trunk of her father’s car in order to crash a big Hollywood party on the occasion of the first screening of a porno film, and when she tells March “There are whores and stuff here,” he corrects her—telling her that she shouldn’t say “and stuff”: “Just say ‘There are whores here.’” It’s somewhat uncomfortable, in the same way Jody Foster as a 14-year old prostitute in Taxi Driver might have made you uncomfortable, and Rice is probably deliberately groomed to remind you of a young Jody Foster from, again, the 1970s. But the fact is, it is clear from her home situation that she has had to grow up and take responsibility very early, since her father is not particularly reliable and apparently often on a bender—the first time we hear her she is reminding Gosling to get up because he has to go to work that day.

Precocious and discomfiting or no, Rice very nearly steals the show, and this debut is likely to take her a long way in snagging age-appropriate parts over the next few years. In terms of the film, she is of course exactly the kind of young thing that Crowe’s character cannot help trying to defend, and so protecting Holly becomes a motivation for Healy as well as her father.

All of this may sound pretty serious, even dark. The film does have its noir aspects. But there’s a lot of spoofing going on, of the hard-boiled detective genre, of the 1970s themselves, of buddy-cop genre clichés. Still, there are some tense moments near the end of the film. And overall, this is definitely an R-rated movie. Just because it has a 13-year old co-star doesn’t mean your 13-year-olds should attend. Angourie Rice shouldn’t see this movie herself for another four years. At least Healy wouldn’t think so.

But you should see it. If you’re over 17. It’s entertaining and it’s clever, and it will keep you guessing up to the end. I give it three Tennysons!

“Sumer is icomen in” (The Cuckoo Song)
Scroll to top