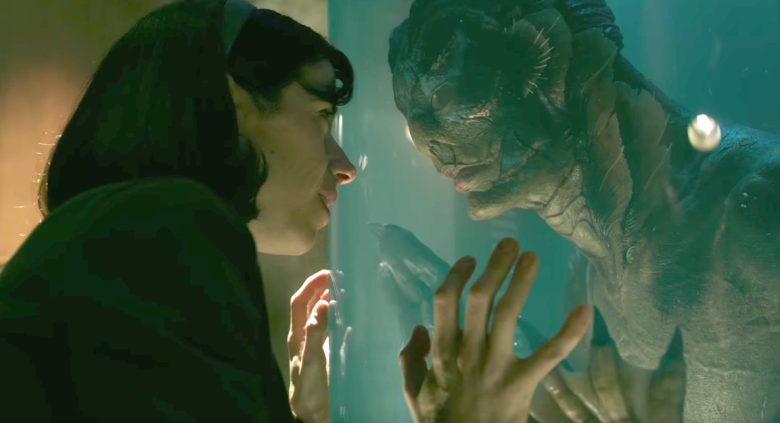 The Shape of Water

With 13 Academy Award nominations, announced yesterday, The Shape of Water leads all other films of 2017. Released on December 22, Guillermo del Toro’s romantic horror-fantasy has had a month to make it to Conway, but (like most of the important movies of the season) has yet to do so. It is now, in fact on only one screen in central Arkansas, at Riverdale 10. How long it will be there who can say? So if you want to see this movie, I’d advise you to get there soon.

With his characteristic magical realism, Mexico’s best-loved export and film critics’ darling del Toro (Pan’s Labyrinth, Hellboy) has put together a modern fairy tale that combines the paranoia of cold-war monster films like The Creature from the Black Lagoon with folk tale motifs familiar from Beauty and the Beast or The Frog Prince.

The film begins with a voiceover—belonging, we realize later, to Giles (Richard Jenkins, best known from TV’s Six Feet Under and Olive Kitteridge), an out-of-work commercial artist whose friend and neighbor Elisa (Sally Hawkins from Maudie and Blue Jasmine) is the protagonist of the film. Giles gives us a “once upon a time” opening, introducing us to Elisa as a fairy-tale princess. It’s probably a good idea to keep this introduction in mind, lest we mistake the story, which takes place in pretty mundane circumstances at a specific moment of historical time, as realistic.

Elisa, a lonely woman unable to speak, lives next to the equally lonely Giles sharing space in a loft above an old movie theater. We are introduced to her through her daily routine, which involves her getting out of bed in the evening, setting an egg timer, lying down in the bathtub (where she seems to gyrate somewhat off camera), making herself some hard boiled eggs, then visiting Giles next door en route to the bus, which she takes to her job as cleaning woman in a government facility dedicated to aeronautical research—a place with all kinds of dials and instruments that looks like something straight out of a 1950s science fiction flick.

Her co-worker, and the only person she seems to have a relationship with other than Giles, is Zelda (Octavia Spenser of The Help and Hidden Figures), who makes sure Elisa gets punched in on time and talks so much during their shift that Elisa has no need to speak. They seem to have a comfortable bond. But one night, things change in the facility, as a strange creature, an “Amphibian Man” (as he is called in the credits) who has been found and captured in an Amazonian swamp by a certain Colonel Strickland (a comically and bizarrely threatening Michael Shannon of Nocturnal Animals and Revolutionary Road). Stickland is now in charge of security at the facility and keeps the creature chained in a water tank, where he wants to study “the asset” as he refers to the creature, with the possible object of sending him into space for experimental purposes. Meanwhile one of the researchers at the institute, Dr. Hoffstetler (the ubiquitous Michael Stuhlbarg, who also appears in The Post and Call Me by Your Name this holiday season, not to mention TV’s Fargo earlier this year) happens to be a Russian spy who would love to capture “the asset” for the Russkies.

Meanwhile the Amphibian Man himself (played by Doug Jones, currently in TV’s Star Trek: Discovery) seems to have an actual human-like consciousness in there, in a body that looks uncannily like the Creature from the Black Lagoon in those films of the fifties. And Elisa seems to sense a kindred spirit under the scales. Like her, the Amphibian Man cannot speak except by a kind of sign language. Like her, he is alone and isolated. Like her, he is regarded a kind of freak by many others in society. And so she begins to hang out at the creature’s tank, making friends with him by offering him some of her hard boiled eggs and, as time goes by, playing big band music for him on a portable record player.

But this idyllic state can’t last, of course, because Colonel Strickland and the evil military forces behind him want “the asset” terminated, for no particularly good reason except they don’t want the Russians finding him. Meanwhile Hoffstetler’s Russian overseers would also like to see the Amphibian Man destroyed so that the Americans can’t learn anything from him. But Hoffstetler’s got a conscience, and he’s willing to help Elisa, with the assistance of Giles and Zelda, to smuggle the creature out of the lab to where Elisa can keep him in her bathtub at home. The plan is, ultimately, to set him in the river at high tide some days hence.

But this is where it gets weird. Elisa’s attraction to the Amphibian Man develops into a romantic passion, and yes, an inter-species love affair develops. Okay, this may sound like a spoiler, but every other review of this film mentions it, and if you’ve heard from anybody who’s seen the movie you know it’s there. I found it initially shocking, even disturbing, but then I realized that it was no different from The Little Mermaid—it’s just that Ariel is a bit more attractive than Amphibian Man, and besides, they are both fairy tales. What happens in The Shape of Water is a parable about two isolated beings, two social misfits, finding happiness together.

It’s not surprising that Elisa’s helpers are Giles, a repressed gay man whom we see vehemently rejected in his only attempt at intimacy in the film, and Zelda, a black woman n 1962 America, where an African-American couple gets thrown out of a diner where Giles is eating, and where images of blacks being attacked by dogs while protesting in southern streets are shown on the news program that Miles turns off in favor of Shirley Temple movies. But it does occur to me that, ultimately, Elisa is abandoning her humanness in favor of the Amphibian Man. This is a little harder to take than Ariel abandoning her mermaidness in favor of a human man. It’s no accident that the film playing in the movie house beneath Elisa’s apartment is The Story of Ruth—the story of a woman who abandons her home and her own people in order to become a part of her husband’s.

To talk about the film’s denoument definitely would be a spoiler, but suffice it to say that Strickland will stop at nothing to get “the asset” back, and the Russians still want Amphibian Man dead. And Elisa is still bent on getting him to the river at high tide. And everybody is not going to be satisfied in the end. Let’s just say that if the interspecies sex wasn’t enough for you, there is definitely enough violence in the end to justify the film’s R rating, and then some.

In the end, this is definitely a film worth seeing. In combining a fascination with horror and the monstrous with a tone of fairy tale romanticism, in addition to its beautiful visuals all tinged with a bluish-green hue, this is a quintessential Del Torian film. The ensemble cast is one of the most impressive of the year, with Hawkins’ memorable hauntingly waif-like Elisa (brought to life without her saying a single word) leading the way, and Jenkins’ repressed and lonely Giles painfully sympathetic as well. Both deserve their Oscar nominations, as does Spenser as the sympathetic and harassed best friend. Shannon and Stuhlbarg are equally fine in their roles.

Is The Shape of Water the best picture of the year? It seems to be the favorite going into the Oscar competition. It is certainly a good looking, well-acted film. It is certainly not a run of the mill Hollywood production, but surprises, delights and even astounds by turns. Despite its fantasy genre it communicates on a very human level. But I don’t think all of that makes up for the parts of the film that strain our willing suspension of disbelief. Three Tennysons and half a Shakespeare for this one.