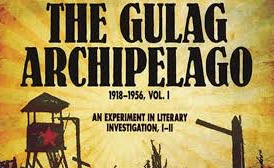 The Soviet Union’s most important writer, Aleksandr Solzhenitsyn, had already won the Nobel Prize for Literature three years earlier when he began to publish what he considered the major work of his life, the seven-part history and memoir of the Gulag system, the “archipelago” of prison-work camps to which tens of millions of Soviet citizens were sentenced and in which millions died, particularly during the tyrannical leadership of Joseph Stalin. Part I and II of the long history were published in translation in the U.S. in 1974, and naturally I ran out to get a copy. Of course in 1974 I was caught up in a Ph.D. program and pretty much everything I read pertained to medieval literature in general or Chaucer in particular, so Solzhenitsyn was shoved to the back of my bookshelf.

Where he remained for 45 years. Having recently retired and set out on a mission to read a number of long tomes that have been gathering dust on my bookshelves for decades, I recently took down this one. Reading Solzhenitsyn’s work at this point, more than fifty years after he completed the manuscript and nearly thirty years after the fall of the Soviet Union itself, is a bit like delving into ancient history—when the exiled Solzhenitsyn returned to his own country after the fall of the communist government in 1991, he was essentially a forgotten man there, and nobody wanted to hear about the distant past. Except that so many things in his text resonate even today as they paint a picture of the dangers of what happens when a megalomaniac whose only interest is perpetuating his own power gains control of government.

The book chronicles the era of forced-labor camps from 1918 until 1956—that is, from their beginning under V.I. Lenin immediately after the Bolshevik revolution through their intensified use and abuse under Joseph Stalin (1924-1953) to the end of the worst abuses of the system with Nikita Kruschev’s 1956 “Secret Speech,” in which the new Soviet leader denounced the “personality cult” that permitted and excused Stalin’s despotic rule: “On the Personality Cult and its Consequences.”

Krushchev’s speech did not mean that the Soviet government was willing to let the truth about the prison system be common knowledge for Soviet citizens, let alone publish it for the rest of the world. Nor, Solzhenitsyn would insist, did the tyranny end with Stalin’s death. The story of the Gulag Archepelago’s publication is as sensational as anything in the book itself: Solzhenitsyn, under constant surveillance by the KGB, had scattered his manuscript among various supporters throughout Russia, as well as with fellow Nobel laureate Heinrich Böll in Germany. In 1973 the KGB arrested one of Solzhentisyn’s typists, Elizaveta Voronyanskaya, who after days of interrogation revealed the location of one of only three manuscripts of the text still in the Soviet Union. The unwilling informant hanged herself shortly after the KGB released her. Though Solzhenitsyn’s goal was to publish the book in Russia, when he heard about Voronyanskaya’s suicide, he decided the book must be published without further delay. It was printed in Paris in 1973 in Russian, and French and English translations were published the following summer.

Solzhenitsyn ultimately published nearly 2,000 pages of damning history, gathered through his own experience as an inmate at one of the Gulag camps between 1945 and 1953, as well as the experiences of 227 other survivors of the camps whom he interviewed in the preparation of his work. There was a campaign in Russia itself to discredit Solzentisyn’s research, chiefly conducted by the KGB, which even got Sozhenitsyn’s wife to declare that he never intended that the books should be taken so seriously, since it was made up simply of legends and folk-stories from the workcamps. Such criticisms have led to his methods being criticized by a few historians, as if these survivors’ memories might be biased or faulty. But that seems a moot point. Are Holocaust survivors’ tales to be disregarded because we might not have Eichman’s perspective on things? Sure, there is not a lot of verifiable factual data here: We know that at any one time between 1929 and 1953 there could be between 12 and 15 million prisoners in the camps, and we know that millions of them died, and we know that the vast majority of these inmates were political rather than criminal prisoners. I would think that the entire point of a history of the camps would be their effect on people who were unjustly imprisoned—and that appears to be a majority.

Even had they been legitimate political prisoners, people who sought to change the Soviet government itself, the executions and the torture inflicted on these people would be enough to make such stories credible. But the most bizarre and mind-boggling cases Solzhenitsyn describes appear to be the most common: those prosecuted under what he identifies as Article 58 of the Soviet Penal Code, an article enacted in 1927 and written to deal with “counter-revolutionary activities.” Solzhenitsyn notes that such activities were so loosely described in the code (which typically carried sentences of 25 years, or, of course, execution) as to give the secret police carte blanche in arresting virtually anyone for virtually anything. Most shocking to me was the apparently customary practice of arresting and imprisoning returning World War II POWs for “counter revolutionary activities”: getting themselves captured and made prisoners of war was considered treasonous in itself, but the chief fear, as Solzhenitsyn tells it, is the fact that these soldiers, imprisoned in the West, would have direct knowledge (albeit from a POW camp) of how much better life was in western European countries.

This first volume of Solzhenitsyn’s behemoth text follows a typical prisoner’s journey, beginning with their arrest, often coming as a surprise since they will have had no idea what they may have done that could be considered “counter-revolutionary.” We move on to the interrogation stage, in which the accused (or in Russian slang the zek—short for zakliuchennyior prisoner) stands before a judge without representation, and after intense questioning, deprivation in overcrowded cells, and often torture, the prisoner signs a confession. Sometimes there will be a “show trial,” again without a true advocate for the defense, but in any case these will be inevitably followed by a sentence of ten or later, more commonly, twenty-five years. Then comes transport to the prison camps of the Gulag (the acronym for the bureaucracy that ran the internment camps), which are scattered like an archipelago of islands across the vast land mass of Soviet Russia. Most often transport is on badly overcrowded trains that have insufficient facilities and are filthy and pestilential, and on which political prisoners are robbed, beaten and raped by the criminals with whom they are incarcerated, whom the guards allow to abuse the political prisoners, usually because they are in league with the criminals. The volume ends with the arrival of the seeks at the camps—where things seem just as bad as on the trains. Millions, of course, never got that far. And millions do not last until their release. But there are two volumes after this one, which will detail in depth life in the camps. By the end of volume one, Solzhenitsyn has only this to say: “In camp it will be … worse.”

I have to say that I am not likely to read the other two volumes of this work. I think I’ve had enough of the tragedy for now. Not that it isn’t readable: Solzhenisyn makes it read often like a novel, in a style that today would probably be called “creative nonfiction,” and an entertaining tone both polemical and caustic. Another of Solzhentisyn’s fellow Nobel laureates, Doris Lessing, called it the book that “brought down an empire.” That’s probably an overstatement: The system was bankrupt in any case, collapsing under its own weight. But Solzhenitsyn’s exposé  may have helped speed the Soviet demise along. Until the regime’s collapse, it was illegal to possess a copy of this work. What for the government was the most dangerous element of the work was that Solzhenitsyn did not merely attribute the atrocities to Stalin, but showed that the groundwork for the abuses had been laid even under Lenin: The fault, he argued, was inherent in the Soviet government itself, and not a Stalinist aberration. As Solzhenitsyn asserts:

“Ideology—that is what gives evildoing its long-sought justification and gives the evildoer the necessary steadfastness and determination. That is the social theory which helps to make his acts seem good instead of bad in his own and others’ eyes…. That was how the agents of the Inquisition fortified their wills: by invoking Christianity; the conquerors of foreign lands, by extolling the grandeur of their Motherland; the colonizers, by civilization; the Nazis, by race; and the Jacobins (early and late), by equality, brotherhood, and the happiness of future generations… Without evildoers there would have been no Archipelago.” (p. 174)

The lessons of this book are still relevant. The once-banned book became required reading in Russian schools in 2009.  I make it strongly suggested reading here.

Three Tennysons and half a Shakespeare here.