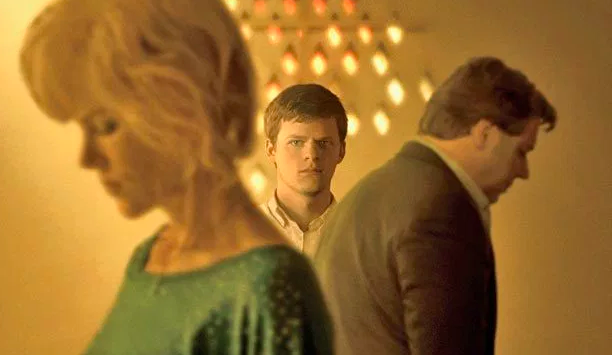 Lucas Hedges, as this film’s protagonist Jared Eamons, is rapidly putting together a remarkable portfolio of memorable film performances, from his Oscar-nominated role in Manchester by the Sea, through his sympathetic turns in Ladybird and in Three Billboards Outside Ebbing, Missouri, to his Golden-Globe nominated performance in his current film, Boy Erased, Hedges is fast proving himself to be one of the best actors of his generation. In the latest film, he is joined by veteran actors Nicole Kidman and Russell Crowe, whose combined acting credits include two Oscars and seven nominations, and who both give intelligent, nuanced, and sympathetic portrayals of Jared’s parents, who in other hands could come across as caricatures or villains.

To a large extent our sympathy for the whole family is a product of Joe Edgerton’s direction, as well as his screenplay, which he based on Gerrard Conley’s 2016 memoir based on his own experiences in small-town Arkansas and in the conversion therapy program his parents put him in when they found that he was gay. Edgerton (who previously wrote and directed The Gift with Jason Bateman) also plays the film’s chief antagonist Victor Sykes, the unaccredited “therapist” who runs the expensive conversion therapy program called “Love In Action,” in which Jared finds himself enrolled and where he and his parents hope he can “pray away the gay.”

Jared, the product of an Evangelical Christian upbringing with a father, Marshall (Crowe) who, while the owner of a large Ford dealership, is also a Baptist minister, and mother, Nancy (Kidman) who embraces her role as the supportive wife who goes along with and accepts her husband’s decisions. Jared, who in flashbacks is shown not to be physically attracted to his longtime girlfriend, has been struggling with his sexuality in his first semester of college. After an incident with another male student (Joe Alwyn of Billy Lynn’s Long Halftime Walk) who subsequently outs him anonymously to his parents, Marshall seeks the guidance of two senior Baptist ecclesiasts, and on their recommendation enrolls Jared in Sykes’ program.

Before that is to happen, though, Marshall takes the precaution of sending Jared to their family doctor—not to actually get the doctor’s scientific opinion of the “Love In Action” program, but to test the boy’s testosterone level. The doctor, played by veteran actress Cherry Jones (TV’s The Handmaid’s Tale) does tell Jared that he is a perfectly normal teenaged boy, and that as an 18-year-old, he does not have to go to into this program that his parents are insisting on. As an actual representative of medical science, the doctor is a foil to the pseudo-therapist Sykes, but at this point Jared just wants to be what his parents raised him to be.

Of course Nancy is the one that has to take Jared to the program, and stay in a nearby hotel for the twelve weeks he must be enrolled, dropping him off in the morning and picking him up in the late afternoon. Clearly this adventure is costing the Eamonses a bundle, but they must feel it is worth any price to purge what they perceive as Jared’s sin, and to restore him to a right relationship with his Savior. And at first Jared accepts what is going on in his treatment, though he is a bit put off when his cell phone and personal belongings are taken away from him and he is told not to share anything that happens in the program with anyone else, including his parents.

The treatment is modeled somewhat on addiction recovery programs, and from the beginning Jared is told that his sexual orientation is a choice and, in his case, a sin. His first assignment is to create a family tree, and to identify members of his family whose sins may have contributed to his own sinful choices. He’s assigned to do a “Moral Inventory,” in which he is to reflect on his past choices and show how he now realizes how wrong those choices were. As Jared works on this homework assignment, we are given flashbacks of the incidents that have brought him to this place. But unlike the other “clients” who share their inventories with the class, Jared does not seem to be feeling “cured” by the activities he engages in here in the program.

These activities consist of group discussions, sharing, role playing and the like, and as the weeks progress, these come more and more, as Jared observes them, to border on psychological and at one point physical abuse, particularly in the case of one fellow inmate, Cameron (Britton Sear from TV’s Vice Principals), a football player whom Sykes bullies and even allows others to beat with Bibles at one point. And Jared is also put off when Sykes tries to tell him that he should drop out of college and spend the next year in a “Love In Action” group home, because that’s what he really needs at this point in his life. This is where Sykes begins to reveal himself as little more than a charlatan and huckster. When Sykes begins to bully Jared the way he bullied Cameron, and tries to do a roleplaying exercise in which Jared confronts his father and tells him how much he hates him, Jared has had enough, and his decision to leave this “treatment” immediately leads to the film’s tensest moments as Sykes and his whole organization rally to try to stop him.

Several of the minor characters in the film deserve mentioning. One of Sykes’ minions (played by the Red Hot Chili Peppers’ Flea) is a former convict who claims to have found Jesus but bullies Jared and calls him “fag.” He’s a menacing presence throughout, while the Australian pop singer Troye Sivan as Gary is excellent as a fellow inmate who coaches Jared on how to fake his way through the program (Sivan contributed the song “Revelation” to the film’s soundtrack). And Canadian filmmaker Xavier Dolan (Mommy) is memorable as Jon, an emotional wreck who salutes people because he’s afraid of any kind of physical contact, and who is in the program for a second time.

But the best scenes of the film are not in the “Love In Action” facility. They are the quieter, more intimate scenes between Jared and his parents. Kidman is phenomenal when her role as loving mother wins out over her role as obedient wife and she “rescues” her son from what in effect is his imprisonment. But the true emotional center of the film is a climactic scene between Jared and his father. The scene is honest and raw, and Crowe earns our sympathy as a loving father trying but failing to reach out to and understand the person his son has become, without denying his entire belief system. Boy Erasedcould have easily been a simple morality play, with angels and devils and black and white. But it’s not. Even Sykes, shyster that he is, gives the impression that something is in there that he’s suppressing—a suspicion that is clarified in the ending credits.

Earlier this year, in August, another film dealing with ha fictional “conversion therapy” story based on the Young Adult novel The Miseducation of Cameron Post by Emily Danforth, had its U.S. premiere in North Little Rock, at the Kalaidescope LGBT Film Festival, though it never returned nor was it picked up by any of the conventional movie houses. The fact that two major movies with this theme have been released this year is remarkable. One might ask why—particularly since young people, who are the chief movie going public, are simply no longer bothered about such things, but are far more accepting of LGBT issues than any other generation has been. But the fact is that to date, only 14 states and the District of Columbia have outlawed conversion therapy, which means that in 36 states, including Arkansas, young people—and their concerned parents—are still subject to the abuse and chicanery of the ineffective, psychologically dangerous and expensive “therapy” of the unqualified and unprincipled con-men who run such places. And it doesn’t help that the Vice President of the United States vocally supports the hate groups that defend and applaud such programs.

Thus endeth this week’s rant. Three Tennysons and half a Shakespeare for this one.