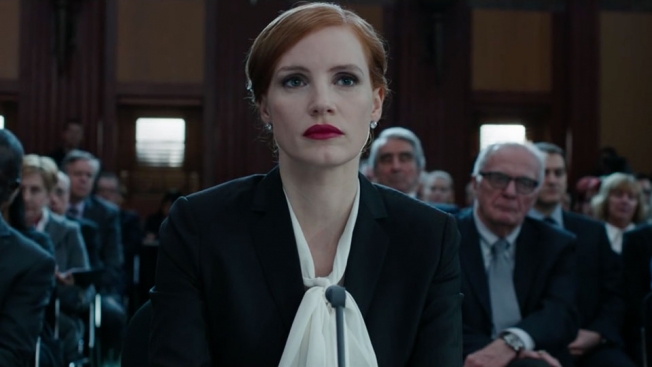 Miss Sloane is a film about the virtually unchecked influence of lobbyists in our nation’s capitol, and the shaping of policy by money and power (when somebody mentions “public opinion” in the film, he is very quickly told that “public opinion doesn’t matter”—the only thing Congress is interested in is power and the money that can keep its members in power, and it’s the lobbyists who arrange that). This, at least, seems pretty clear in the film. And by the way, if you think that premise is false, you haven’t been paying attention.

Not that this is anything new. The “spoils system” and pork barrel politics have been the rule at least since the Jackson presidency, and serious scandals rocked administrations at least since the time of Grant. What is relatively new is the extent of lobbyist influence—that and the public’s indifference and tendency to ignore this kind of corruption. Enter Hollywood: Somebody needs to point out the failings of government, and Hollywood has a long history, as well, of portraying political corruption. But in classics from Frank Capra’s Mr. Smith Goes to Washington to Alan J. Pakula’s All the President’s Men, these films all had one thing in common: The audience was rooting for the protagonist. Whether it was Jimmy Stewart as naïvely idealistic senator or Redford and Hoffman as investigative journalists actually doing their job, the Davids who went up against the Goliath of corrupt government were heroes we identified or at least sympathized with.

Elizabeth Sloane, on the other hand, played with cold detachment by Jessica Chastain in this new political thriller from John Madden (Shakespeare in Love) is not somebody we can even like, let alone sympathize with. We might be rooting for her to be successful in her cause, but not because we agree with her motives. If we can figure out what her motives are.

As the film opens, Sloane, a high-powered Washington lobbyist who runs roughshod over her opponents and over the minions who work for her, is approached by a gun lobbyist with incredibly deep pockets who wants to mount a campaign that will appeal to women. Sloane finds the suggestion so ludicrous that she literally laughs in the lobbyist’s face, after which, pushed by her boss George DuPont (Sam Waterston) to apologize and take the money, Sloane opts to resign from her company to go work for a small nonprofit lobbying firm run by straight-as-an-arrow Rodolpho Schmidt (Mark Strong of The Imitation Game), that is working to pass a gun bill to require background checks on all gun purchases.

Even these crusaders do not believe they can be successful—even the most zealous of them believe they will lose but should put up a strong fight. Chief of these is Esme Manucharian (whose name no one in the film can pronounce—a self-parody, perhaps, for the actress playing her, who may have the same problem in real life: Gugu Mbatha-Raw of Belle and Free State of Jones). Sloane, of course, did not come here to lose, and her tactics, which involve bullying and spying on her employees and her rivals with illegal surveillance, working sixteen-hour days fueled by pills, and using people, particularly Esme, in ways that can only be called brutal. She is arrogant, humorless, sarcastic, and she takes no prisoners. She is Machiavellian in the worst sense of the word: She knows in her profession it is much better to be feared than loved, and the movie tests whether you, as viewer, will accept the premise that the end justifies the means. Will you pull for Sloane even as she uses immoral means to achieve a moral end?

There is a point at which Sloane finally admits to have crossed a line she should not have crossed (who even knew she was aware there were lines?), but even that admission could be an act. We just don’t know. In fact, we don’t know anything about Miss Sloane herself. She hints at having a complicated, perhaps pitiable backstory, but we never glimpse it. She also apparently has chronic insomnia, but we never learn why (though all those uppers she takes probably aren’t much help in that department). She forms no personal relationships: She seems to live in a hotel room rather than any place of her own, she eats dinner alone in a Chinese restaurant every night and then pays for a male escort on nights she wants somebody around, but even the escort, Forde (Jake Lacy of Carol) cannot break through the ice of her demeanor, and not for lack of trying. The one thing we do know about her is her ruthless pursuit of the goal. She is successful, she tells her lawyer in the film’s beginning, by always staying ahead of her opponents, by knowing what they are going to do, knowing what their trump card is going to be, and playing hers right after they play theirs, in order to win the game.

This personal philosophy is of particular importance in the film’s climax, where an unforeseen twist gives us all a bit of a surprise. It’s a clever ploy by rookie screenwriter Jonathan Perera, who for most of the film seems to be sincerely flattering Aaron Sorkin by closely imitating the pace and rapid-fire dialogue of a Sorkin script, with a lot of talking going on while people are walking. Chastain is good at this, and of course Waterston and Allison Pill (as Sloane minion Jane Molloy) are veterans of the Sorkin-like banter from having been in The Newsroom TV series. Other standouts in the cast are John Lithgow as a slimy senator and Michael Stuhlbarg (another Sorkin screenplay veteran from Steve Jobs) as Sloane’s biggest rival from her old firm.

But this is Chastain’s movie from start to bloody finish, and she nails it. Her Golden Globe nomination this week is no fluke, and she will certainly have an inside track to an Oscar nomination as well. She plays the part with brittle intensity, creating a character whom we wonder about but cannot penetrate, who touches no one and no one touches her, and yet somehow gets us to cheer for her as she strives to bring down people like herself.

There are certainly flaws in the film, chief of which is that we are essentially left wondering about Sloane’s motivation for what she ultimately does. She explains it, sort of, but the explanation is scant and we’re never sure we can trust what she’s saying, especially when she has an audience. The other question is when she planned all of the things she is revealed to have done, since it would seem she had to have started planning things before she even left her job with Waterston’s company, and how at that time could she possibly have known what she was going to need by the end of the film?

For these reasons, the film itself is not completely successful in its plot. Thematically, however, the Machiavellian turn is admirable. And Chastain’s performance is first rate. Three Tennysons for this one.