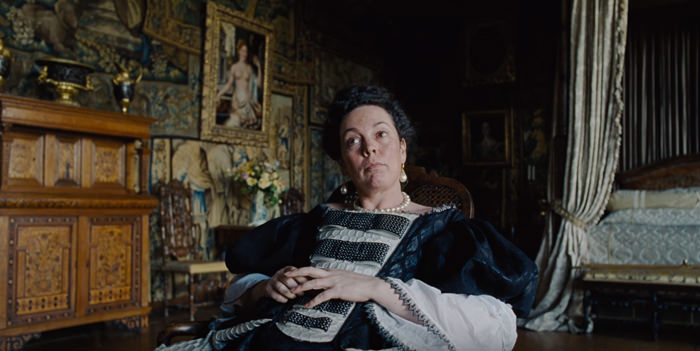 The Favourite, one of the very few films on limited release in December in order to be considered for Oscar nominations that has actually made it to central Arkansas (albeit on but a single screen) is one of those interesting anomalies that has critics cheering (it has a 94 percent rating on Rotten Tomatoes, and has only one negative review from “top critics”) and audiences far less enthusiastic (only 60 percent of audience members like the film, according to the same review aggregator site). A glance through audience responses suggests three chief reasons for negative reactions (and those who do not like the film reallydon’t like it): First, the film’s trailer, they say, makes it seem to be an uproarious comedy, but they found nothing funny in it. Second, they found the film to have little plot. Third, they found the film to be offensive or repugnant, presumably because of its language and the sexual nature of a number of scenes.

To consider the last of these objections first, the film isafter all rated R, and it has the nudity, language, and sex to earn it that rating honestly. To object that the film is exactly as advertised in this area seems a bit unfair. Perhaps the problem is that it is generally lesbian sex that is depicted, and some portion of the audience found that particularly objectionable, though there is nothing graphic depicted in that way, only suggested. In any case, I don’t find this third complaint legitimate, or quite fair.

That first objection is a lot fairer, it seems to me. If you’ve seen any of the trailers for this film, you probably came away with the impression that it’s a light hearted romp of a costume-rich period-piece, with Queen Anne’s ladies in waiting frolicking through her reign. Well, the costume-rich period-piece part of that is accurate. But there’s nothing lighthearted about this drama of devious and dangerous backstabbing court intrigue. There are occasional flashes of humor, but it’s awfully, awfully dark. You’re not going to leave the theater chuckling to yourself about the zany adventures of the Duchess of Marlborough and her whacky queen.

That leaves us with objection number two. I confess that I cannot see how anyone can call this film plotless or directionless, or any other such label. Perhaps those saying such things are confusing The Favouritewith the season’s other widely anticipated historical drama, MaryQueen of Scots—another film featuring rival historical women of power, but one in which the stakes are life-and-death and the survival and fall of kingdoms. Or perhaps, in a kind of violence=plot confusion, they are expecting Marlborough’s battle against the French in the War of Spanish Succession to give the film a good deal of action. Neither of these is the case, and if you are expecting this kind of movie you might be bored with The Favourite. But there is certainly plenty of plot and plenty of underhanded action in the script by executive producers Tony McNamara (TV’s Doctor Doctor) and Deborah Davis (who with McNamara is nominated for a Golden Globe for this, her first screenplay), but the plot involves the connivings and manipulations of three women in a royal court.

The film is set during the early eighteenth-century reign of Queen Anne (Olivia Colman, perhaps best known from TV’s Broadchurch, who will be playing another queen, Elizabeth II, in next year’s season of TV’s The Crown). Anne is last of the Stuart monarchs of England (she’s the daughter of James II and the sister of the Mary of William and Mary fame). She reigns from 1702 until her death in 1714, and she will die without an heir—the film makes it clear that she has had no fewer than 17 pregnancies, all of which ended in miscarriage, still birth, or children who died in infancy—and therefore will be succeeded by the four Georges of the house of Hanover. The chief concern of Anne’s reign as this film depicts it is the long and expensive War of Spanish Succession, which Britain is fighting against Spain and France, and the hero of which is the Duke of Marlborough (ancestor of Sir Winston Churchill). Marlborough’s duchess, Lady Sarah Churchill (Rachel Weisz) is the queen’s oldest and dearest friend, and serves in Anne’s court as her closest adviser (as well as her lover). In fact, as this film depicts it, Lady Churchill runs the country, making all of Anne’s important decisions for her, while the queen is something of a pampered, overindulged woman-child, grown monstrous by power checked only by Sarah’s bullying and cajoling. The queen is crippled by gout and other ailments, and is brought low by many griefs, including her seventeen lost children whom she has replaced by pet rabbits given her children’s names. Sarah is an adept politician, capable of running the country while keeping the incompetent head of state happily thinking she’s really the one in charge. Feel free to draw your own contemporary parallels here.

Into this situation drops Abigail Hill (Emma Stone), a streetwise cousin of Lady Churchill’s whose family has fallen from their formerly wealthy status and who has come to Sarah to sue for some kind of job at court. Sarah is not exactly welcoming to her poor relation, but does take her on as a scullery maid. When Abigail, having witnessed Queen Anne’s painful gout, borrows a horse and rides out into the countryside to gather herbs for a certain anti-gout remedy she happens to know, and then lies her way into the queen’s chamber to try it out on the royal legs, Sarah swoops in and orders her to be given a beating. At this point our sympathies are pretty securely on the side of the poor young cousin (and it isEmma Stone after all, who’s alwayssympathetic) rather than with the cold, steely Sarah. But as things develop, we come to realize that Sarah is chiefly interested in furthering the political aims of her husband and his party for the good of the nation as she sees it, while Abigail’s agenda is the attainment of power like that of her cousin, and it seems she’ll do anything to get it (including satisfying the queen’s appetites)—basically, it’s All AboutEvebut with more venom, and more lesbianism.

In her meteoric rise, Abigail is assisted by the unscrupulous and absurdly bewigged and berouged Whig politician Harley (Nicholas Hoult, X-Men’s Beast), whose chief political goals seem to be holding the line on spending, ending the war, reducing taxes on country landholders, and getting rid of Lady Churchill. One might fear that the poor, naïve Abigail will be eaten alive by the savvy politician, but fear not. Turns out Abigail can hold her own. And yours too, if need be.

Greek filmmaker Yorgos Lanthimos (The Lobster) is not known for creating films designed to be crowd pleasers: His films have been described as “cruel” and even “sadistic,” assaulting the audience with a kind of scornful objectivity about spiteful human nature. This works in TheFavouritebecause it’s an attitude that fits so well with a story about political intrigue, no matter when that story takes place. Hatfield House in Hertfordshire, England, where the movie was filmed, provides a gorgeous period background for the story, and the occasional bizarre fish-eye lens wide camera shots create a kind of surreal house-of-mirrors atmosphere, made more grotesque by a sometimes strangely irritating score. There are deliberate occasional anachronisms in language and even in the costumes, which on the whole are a scrumptious feast for the eyes, but in which I’m told you can even see zippers in some of the “period” gownss, though I didn’t notice any myself. Such anachronisms serve to give the story a more contemporary application.

But the performances of the trio of leading women provide the truly memorable aspect of the film. Whatever else it is, The Favouriteis a showcase for the remarkable talents of Weisz, who is chillingly cold and unflappable as Lady Churchill; of Stone, disarmingly “innocent” and maliciously calculating as Abigail; and of Colman, narcissistic, infantile and wallowing in self-pity as Queen Anne herself. All three women have already been nominated for Golden Globes as well as for Screen Actors’ Guild Awards for their performances, Colman for lead actress and the others for supporting roles, though the distinction here is a matter of semantics, since all three roles are essentially leads. It’s definitely worth coming to see them perform. Three Tennysons and half a Shakespeare for this one and don’t listen to the haters.