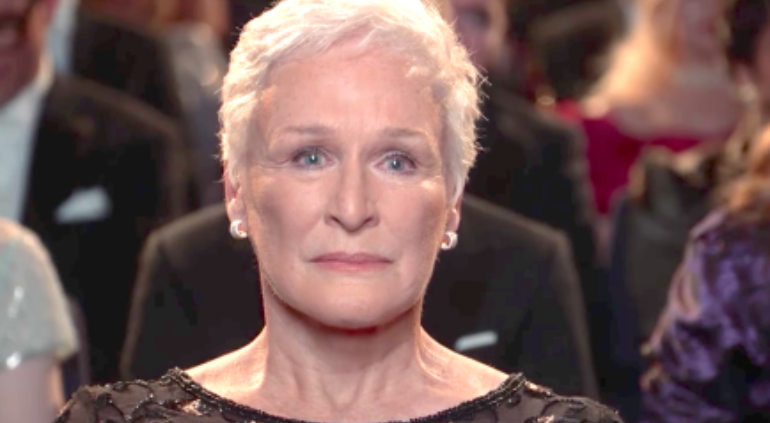 Swedish director Björn Runge’s current film The Wife was adapted from a novel of the same name by Meg Wolitzer, but as you watch the movie you’ll be surprised it wasn’t adapted from a play. It has all the earmarks of such an adaptation, relying pretty exclusively on dialogue rather than action or scenery or special effects to push the story along. Jane Anderson, who wrote the screenplay, is also a playwright, which may explain the format.

This may be one reason why the book, released in 2003, has taken fifteen years to get to the screen, though Anderson composed the screenplay shortly after the novel’s publication. But a more likely reason for the delay is that the protagonist of the story is a woman in her mid-sixties. And not one that even sings any Abba songs or boasts any superpowers. Even after Glenn Close agreed to do the part, and after Anderson received an Emmy for writing the acclaimed television production of Olive Kittredge, there was trouble getting financial backing for the film. And it certainly has not been a huge box office draw: Though released on August 17 to enthusiastic critical responses, it has come to only one screen in central Arkansas, and that is Riverdale.

But perhaps that delay has been fortuitous, because the film, a close and powerful study of the frustrating (and enraging) suppression of one woman’s great talent in favor of a man’s ego in a patriarchal profession, appears now in the midst of a national upheaval as women across the United States have been coming forward to break the seal of silence that has bolstered an oppressive patriarchy in many areas of American life, including, quite famously, the film industry which for years had blocked the production of this very film.

The film opens with a phone call that awakens a later middle-aged couple, bringing them news that the husband, novelist Joe Castleman (Jonathan Pryce), has just won the 1992 Nobel Prize for Literature. Joe’s wife Joan (Glenn Close) celebrates with him, jumping up and down on the conjugal bed while Joe chants, “I won the Nobel! I won the Nobel!”

This is pretty much the high point of the couple’s relationship in the film. We begin to see a few cracks in the family unit even before Joe and Joan jet off to Stockholm. First there is their son, David (Max Irons of TV’s The White Queen), himself a budding writer, who craves his father’s approval and pleads with Joe to give him feedback on a short story he’s given his father to read. Joan is quick to tell David that she thought the story was beautiful, but Joe just doesn’t have time to give his son any feedback—he’s too busy and important—and David doesn’t seem to put much store in his Mom’s opinion.

Joe’s character as a vain, privileged, egotist is augmented on the Concorde flight to Stockholm, on which another writer, Nathaniel Bone (Christian Slater), who is angling to get a chance to write Joe Castleman’s biography, approaches the couple to congratulate Joe on his award. Joe rudely dismisses him, though Joan is more polite and warns Joe after Nathaniel has left that “There’s nothing more dangerous than a writer whose feelings have been hurt.” The truth of this is borne out as the movie progresses.

At this point, we get the first of many flashbacks, as the film takes us back to 1958, when Joan is a student at Smith and Joe is her creative writing professor. He recognizes her as a talented young writer and encourages her, while she is attracted to the married Joe and looks to him as the Great Man at whose feet she has come to learn. The young privileged WASP Joan, played with uncanny aptness by Close’s real-life daughter Anne Starke (We Don’t Belong Here), ultimately marries her Brooklyn-born Jewish professor (the young Joe played by Harry Lloyd from TheTheory of Everything) after he splits with his wife. The relationship the two keep up over the thirty-odd years between the flashback and the present is established in these scenes: He is still the somewhat narcissistic Author, she the little woman who takes care of him behind the scenes and makes sure he gets where he needs to be on time and dressed in the right clothes.

But these flashbacks show us something else as well: They show us Elizabeth McGovern in a memorable cameo as a successful novelist telling Joan not to try to become a writer because everything in the publishing business is geared to ignoring the female voice. “But a writer has to write,” Joan says, echoing the words of her professor-idol Joe. “A writer has to be read,” McGovern’s character responds, effectively clipping Joan’s wings. These scenes also show us how Joan, working at a publishing house after graduation and listening to the editors (all middle-aged white men) dismiss a talented woman writer (because, well, who besides other women would want to read her?) and lament the fact that “everybody else has got a Jewish writer, where can we find a Jew?” Joan, of course, has one at home, and it is here we learn that it is only through her efforts that Joe’s first book was published.

Back in the present, in the film’s pivotal scene, Joan has a drink with Nathaniel one afternoon in Stockholm before the award ceremony. Bone reveals that in fact he already is under contract to write an unauthorized biography of Joe Castleman, and one that promises to paint a portrait of him warts and all, including his many extramarital affairs. He is pumping Joan to see what he can get out of her to use in the book, but his attitude toward her is complex: He clearly admires her and wants to know what makes her tick. More significantly, he hints at an even greater scandal that would reveal a fundamental dishonesty at the heart of Joe’s work. Joan shows no cracks in her mask of “faithful wife,” and leaves Nathaniel somewhat frustrated. But she does ask him one thing: “Please don’t paint me as a victim,” she says. “I am much more interesting than that.”

And she is, too. When she returns to her hotel and witnesses his near seduction of the young photographer charged by his publisher with documenting his Nobel experience on film—and using some of the same tricks he used on her back at Smith—it is clear that there’s going to be an explosion at some point. But to say anything more than that is spoiler territory.

Because this film depends so much on the actors, it is their performances that make or break it. Pryce is always reliable, and manages to make the husband a believable balance of ego and insecurity, so that we pity him somewhat rather than hate him completely. Slater plays the smarmy journalist like the serpent in the Garden he has depicted so convincingly as far back as Heathers. As David, Irons is sympathetic but one-dimensional because he doesn’t have a lot to do.

But this is Glenn Close’s film from beginning to end. In the book, the title character is the narrator, so the reader gets a constant commentary from her point of view as events unfold, and knows her emotions and ultimately becomes aware of how deep those feelings are and why she has them. The genre of film does not allow for that, though the filmmakers might have opted to approximate that sense by a voiceover, but that would have been awkward and, in the end, most likely ineffective. Instead, Runge and cinematographer Ulf Brantas have chosen to shoot the film largely through close-ups, especially of Close (I guess that would make them “Close-ups”), so that every twitch, every eye-widening or lip-pursing or eyebrow-lifting registers as a strong emotion. Though Joan is, on the surface, the dutiful wife, we know from the very beginning that something is going on beneath the placid, repressed surface of her controlled face—something that by the end manifests itself as long-suppressed rage, and for good reason.

There is already talk of an Oscar-nomination for Close, who has been nominated six times before and never took home the statue. This very well could be her best work on the big screen, and an Academy Award would be well deserved. This is a film that sinks or swims based on its performances, and this one is a gem. Three Tennysons and half a Shakespeare for this film.

W.S. Merwin’s “For the Anniversary of My Death”
Scroll to top